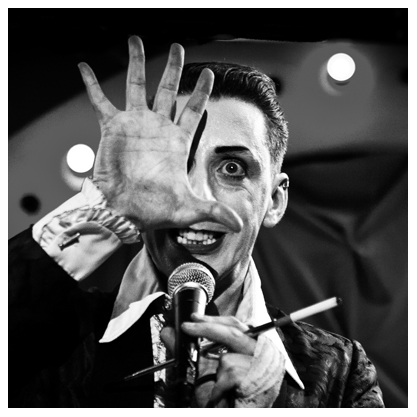 Benjamin Louche is an award winning cabaret and burlesque host, compère, ringmaster, emcee and co-producer of The Double R Club (“… one of the edgiest nights in the capital.” – The Independent). He also has a musical project called Unsong.

Louche has performed live with both Nurse With Wound and Andrew Liles and wrote and narrated on the Liles disc ‘One Brown Tooth’.

SO many to choose from, but one of them would have to be ‘Cop’ by SWANS. It completely blew me away, I’d never heard anything like it. I couldn’t believe anyone could make a record that sounded like that, it was a revelation and a realisation of just how sheltered my experience of music had been up until then.

2.) HOW MANY HOURS DO YOU SPEND A WEEK RECORDING/PLAYING/CREATING?
I’d say approx 20 – 30 hours, though not all of it particularly productive.

3.) WHICH OF YOUR OWN CREATIONS IS YOUR FAVOURITE?
Aside from The Double R Club (which I co-produce with my wife Rose Thorne) I’d say it would have to be my most recent, unpublished (unpublishable?) novel.

4.) WHAT IS YOUR BIGGEST REGRET?
At the risk of sounding like some hippy-dippy cretin, I don’t really think in that way. There are certain situations in my past which I could, and definitely should, have extricated myself from earlier than I did, there are some people that I might have liked to punch when I had the chance, but I’m not sure I can see the point in regretting them now; maybe if I were thoroughly miserable where I am it would be easier and excusable to do so.

5.) WHAT DO YOU DO TO RELAX?
Listen to music mainly. I am a half-arsed gamer and a half arsed runner too, both of which help me to ‘switch off’. A gin & tonic helps too; Tanqueray if possible.

6.) OTHER THAN FRIENDS AND FAMLIY WHAT IS YOUR MOST CHERISHED POSSESSION?
I like the way this question implies that I own my friends and family; would that make me king or slave-master? I’ll take either. Though it’s true I would struggle to do anything I do without my computer, I suppose my most cherished possession would have to be my CD collection.

7.) TELL ME THREE OF YOUR HEROES/HEROINES?
David Bowie, David Lynch, um, the obsessive part of me now wants to name another David to keep my answer uniform, but then it might be amusing to try and upset someone with one of my choices, it’d also be nice to have a woman on the list too… so I’ll simply address whoever’s reading this and say YOUR MUM.

8.) WHERE IS YOUR FAVOURITE PLACE IN THE WORLD?
Onstage anywhere when the audience is part amused, part disbelieving and part frightened.

9.) IF YOU DIDN’T HAVE YOUR ART WHAT OCCUPATION DO YOU THINK YOU WOULD BE DOING?
I’m pretty sure I am 100% unemployable. I have no skills or talents for anything that is practical. At all. I’m lucky in that I’ve only ever had one proper job in my life: making 3D ‘decoupage’ pictures by cutting them out of paper with a scalpel, so maybe I’d do that… but I was never very good at it and seldom met my quotas.

10.) IF THERE IS ONE THING THAT YOU WOULD WANT THE WORLD TO KNOW ABOUT YOU THAT YOU HAVE NEVER CONVEYED IN AN INTERVIEW BEFORE WHAT WOULD THAT BE?
Often it is what pleases / amuses / engages me that is more important to me than what pleases / amuses / engages an audience. This might seem obvious to, say, a musician, but in cabaret many people think that you have to be what others want you to be. I’m not sure if it’s that I can’t or won’t do that. Let’s say it’s won’t, I come off better that way.