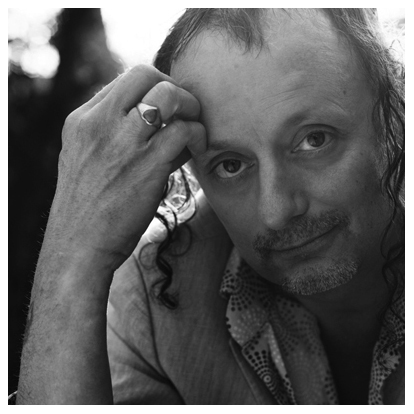 DAVID TIBET is a British poet, musician and artist who has channelled the hallucinatory supergroup Current 93 since 1960, of which he is the only full-time member.

Liles has worked with David since 2007 and has appeared in some form on almost all Current 93 releases since.

1.) WHICH RECORD HAS HAD THE MOST PROFOUND INFLUENCE ON YOU?
Very hard to say… my favourite “song” ever is probably Schola Hungarica’s “Cantio Ad Laudemus Cantoris” from their Gregorian Chant From Aquitaine album. But in terms of earliest and, hence, most profound influence, I would choose Bobbie Gentry’s version of “I’ll Never Fall In Love Again” along with Lynn Anderson singing “(I Never promised You A) Rose Garden”. I was captivated by them when I heard them on the radio as a young boy in Malaysia. I still listen to them a lot. Seeing The Sweet perform “Blockbuster” on Top Of The Pops was a seminal moment, as was hearing T. Rex’s “Sold Gold, Easy Sction” and Alice Cooper’s “No More, Mr. Nice Guy”. And EVERYTHING by Shirley Collins. And EVERYTHING by The Groundhogs. I don’t even have time to start listing songs by Yes, ELP, Uriah Heep, Judas Priest, Jobriath and and and and…

2.) HOW MANY HOURS DO YOU SPEND A WEEK RECORDING/PLAYING/CREATING?
93 or 418, depending on which Æon is scrolling through the Twilight.

3.) WHICH OF YOUR OWN CREATIONS IS YOUR FAVOURITE?
The next album, which presently has the working sub-title An Adventure…which refers to a central them of the album. And my most recent painting. And anything I (often haltingly)  translate from Akkadian or Coptic.

4.) WHAT IS YOUR BIGGEST REGRET?
Getting married.

5.) WHAT DO YOU DO TO RELAX?
Trying to understand how to relax by asking the Stars and Comets their advice at TeaTime. And translating from cuneiform and from Coptic. And also writing cuneiform in modelling clay: every child must return one day to plasticine and her family and friends.

6.) OTHER THAN FRIENDS AND FAMLY WHAT IS YOUR MOST CHERISHED POSSESSION?
Well, it changes. At the moment: in one world, at the moment I am especially enamoured with my first edition, from 1659, of the Meric Causabon/John Dee book, A True & Faithful Relation Of What Passed For Many Yeers Between Dr. John Dee And Some Spirits, and my first and second editions of Francis Barrett’s The Magus; the coloured plates in them are astonishing. I love John Dee more than I can spell. And my Stenbock first editions. Ania Gosczyńska also recently introduced me to the joys of Tilandsia—air plants. I have so many things I cherish. Including more cats soon, too, I hope!

7.) TELL ME THREE OF YOUR HEROES/HEROINES?
My heroines and heroes are Legion; at the moment, as a result of my studies, I am especially in awe of Edward Hincks (1792-1866), Sir Henry Creswicke Rawlinson (1810-1895) and George Smith (1840-1876) for being instrumental in the decipherment of what was then called “Babylonian” and of cuneiform itself. And of course all those who have taught me Coptic, and those with whom I am presently studying Akkadian.

8.) WHERE IS YOUR FAVOURITE PLACE IN THE WORLD?
My house in Hastings specifically, and Hastings Old Town generally.

9.) IF YOU DIDN’T HAVE YOUR ART WHAT OCCUPATION DO YOU THINK YOU WOULD BE DOING?
Spending more time concentrating on studying Akkadian and Sumerian… I left it far too long before falling in love with Assyriology. I also wish I could play an instrument, and I wish I was much more than the very, very average Coptologist I am.

10.) IF THERE IS ONE THING THAT YOU WOULD WANT THE WORLD TO KNOW ABOUT YOU THAT YOU HAVE NEVER CONVEYED IN AN INTERVIEW BEFORE WHAT WOULD THAT BE?
To Let The World Know know I work constantly, in prayer and deed, to utterly destroy Andrew Liles.