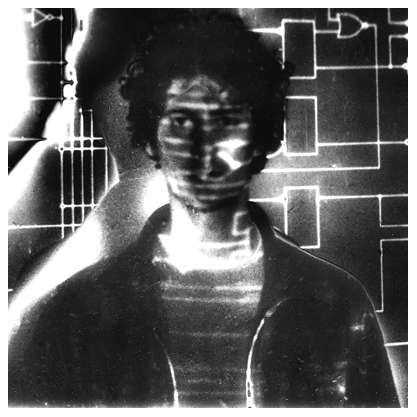 Demian was born in London, he grew up in Cornwall and Venezuela before moving to Manchester. Eventually he returned to London and formed the excellent psyche rock outfit The Oscillation.

There’s a few but I’ll say 17 Seconds by The Cure. I think it was kind of a gateway record that helped me appreciate music in a deeper way and got me into sound, atmosphere and space rather than just songs or composition. The entire album seemed to be its own world and was a place that I could really relate to and get lost in. I was listening to early Pink Floyd, some other psyche and punk stuff but for some reason 17 Seconds changed the way I listened to everything and gave me the confidence to start writing music and exploring the guitar and sound in a different way.

2.) HOW MANY HOURS DO YOU SPEND A WEEK RECORDING/PLAYING/CREATING?
It really varies a lot so would be hard to average it out. Recently there’s been quite a lot of gigs and I’ve had a lot more time in between so I’ve had some time to get in a good headspace to record. Often I have periods where I think about doing music more than I actually do it, either when I’m doing day jobs or even when I have the time, I find it hard to focus. At the moment it’s probably around 20 hours a week.

3.) WHICH OF YOUR OWN CREATIONS IS YOUR FAVOURITE?
That’s a tough one to answer. I usually get really enthusiastic about whatever I’m currently working on before it’s finished and then start to dislike or get more confused by it more as it nears completion. There’s something I really like about the vision or fantasy of how something could be before it ends up being what it is, and when it’s finished (or released) then you just have to accept it for what it is.

4.) WHAT IS YOUR BIGGEST REGRET?
Learning to drive would have been good. Hopefully I’ll do that some day. But does that really count as a regret? I don’t want to say anything heavy ha ha.

5.) WHAT DO YOU DO TO RELAX?
I guess just listening music or watching a film. Sleeping is great too.

6.) OTHER THAN FRIENDS AND FAMILY WHAT IS YOUR MOST CHERISHED POSSESSION?
The small part of my sanity that still seems relatively sane.

7.) TELL ME THREE OF YOUR HEROES/HEROINES?
Klaus Schulze. John Carpenter. DNA. It probably changes every year depending on whatever phase I’m going through.

8.) WHERE IS YOUR FAVOURITE PLACE IN THE WORLD?
I don’t know I could pick one favourite physical place, there’s so many amazing places. Wherever you go when you sleep deeply is a good one.

9.) IF YOU DIDN’T HAVE YOUR ART WHAT OCCUPATION DO YOU THINK YOU WOULD BE DOING?
I’d like to think I’d be doing something that made some kind of contribution like working with mentally ill people or some form of alternative therapy. Or it would have been great to pursue that childhood fantasy of being some kind of martial arts ninja combined with an inner zen and being at one with the universe, space and time. I don’t know what I would have done with that knowledge. Jump off a lot of tall walls and punch through bricks in my spare time. I’ll have to make do with skipping now I suppose, or the idea of it anyway, I can’t see myself actually doing it.

10.) IF THERE IS ONE THING THAT YOU WOULD WANT THE WORLD TO KNOW ABOUT YOU THAT YOU HAVE NEVER CONVEYED IN AN INTERVIEW BEFORE WHAT WOULD THAT BE?
I can repair my clothes using needle and thread if I really have to.