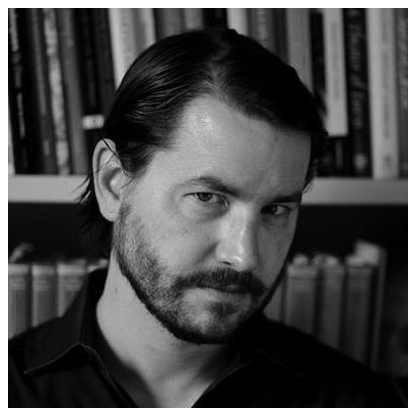 Drew Daniel is one half of the acclaimed electronic group Matmos and creator of The Soft Pink Truth, his experimental house music side-project. He teaches in the English Department at Johns Hopkins University, and lives in Baltimore. He also wrote a book on Throbbing Gristle’s 20 Jazz Funk Greats which was published in 2008 as part of the 33 1/3 series.

1. WHICH RECORD HAS HAD THE MOST PROFOUND INFLUENCE ON YOU?
It’s not very fair to my elementary school love affairs with Run D.M.C. and the Eurythmics, but the honest answer would be Throbbing Gristle’s “Second Annual Report”. By the time I heard it I was into punk and hardcore, but TG opened the door to formal ideas AND subcultural/sexual realities that took me way outside of known territory. I’m still indebted to that record as a design for living.

2.) HOW MANY HOURS DO YOU SPEND A WEEK RECORDING/PLAYING/CREATING?
I am a full-time academic. I’m a tenured professor in the department of English at Johns Hopkins and that is a very demanding “day job”. From September to May I would guess that I spend about 10 to 15 hours a week these days, which isn’t much at all, but it very much depends upon the time of the school year and the proximity of deadlines. From May to August, I’m either making music or performing and touring constantly. This summer we played shows in California and the UK and Portugal and Japan, and after that we have been working on a film soundtrack pretty relentlessly. We did some epic days of recording and mixing for that project: in one day we mixed seven pieces, starting at 11 am and going all day and working until 3:45 am the next morning, continuously. Binges can unsettle your habits and help you break free of constraints, but they can also generate a lot of under-cooked crap, so obviously they should be approached with caution. When it’s the semester and I’m teaching it scales back and I can only work intensively on sound on the weekends. After teaching, I will come home tired from work and watch a film with half of my brain late at night and while I do it I sit and chop and edit sound files randomly, without listening, in order to generate a certain “unconscious” pool of audio material that I will later go over and edit and re-shape. You can get interesting results that way: just grabbing and filtering and slicing blindly. But it’s a back formation of the reality of having hardcore employment.

3.) WHICH OF YOUR OWN CREATIONS IS YOUR FAVOURITE?
God I don’t wanna sound horribly precious but I have real problems with the word “Favorite”, and ranted at length about my difficulty with that word/concept on The Quietus. It’s just not a word I use. As of this moment, I am thinking with fondness about the weird pieces towards the end of our far too long first album. Something like “Office Furniture (After Evidence)” comes to my mind as a time machine back to the apartment in the Tenderloin where M.C. Schmidt and I had to sleep on the floor of our closet so that we could have enough space for our studio. That song is so full of space, and we had so little space in our lives then. Sometimes music can work like a window that you cut into a wall, and it lets the world in. If I need a favorite thing, I will say that that feeling is one of my favorites.

4.) WHAT IS YOUR BIGGEST REGRET?
I did not attend the funeral of a friend because we had to rehearse before a European tour. Logistically, it was possible for me to go from Baltimore to Louisville to attend it, but it was wildly inconvenient and would have fucked up the tour to start off without any rehearsal, so I made my choice. But the guilt of not being there felt very intuitively wrong to me at the time and it continues to eat at me. It was the funeral of Jon Cook, a member of the first band I was in in high school; I loved him very much when I was a teenage closet case and I still carry a torch and I always will. We were a hardcore band in Louisville, Kentucky called Cerebellum. I suppose the only portable lesson there is that you should listen to your conscience. Funerals are odd because if you believe in the reality of that person’s death then you have to admit that the funeral is for the living and not for the dead in any direct way. But I made the wrong choice and I will always regret it.

5.) WHAT DO YOU DO TO RELAX?
Yoga. I am sad these days because a beloved yogi is moving from Baltimore to Los Angeles. I will miss the flute solos he plays when we do corpse pose meditation (I know that sounds totally ridiculous but it’s true). Less healthy but true answer: Lately, at night I go to the parking lot behind the building where I work and I lean against the railing and smoke a cigarette and stare into the trees and feel like an idiot because smoking is stupid and unhealthy and yet there I am in the dark, by myself. It is relaxing simply because I’m not supposed to be writing or making music or answering an email and I can sit and think and breathe and stare at nothing.

6.) OTHER THAN FRIENDS AND FAMILY WHAT IS YOUR MOST CHERISHED POSSESSION?
My heart lifts when I hold my 1688 (fourth edition, first illustrated) copy of John Milton’s “Paradise Lost” in my hands. I feel like Gollum and perhaps it’s bad and creepy to be collector scum on that level, but it is a wonderful thing to be able to read seventeenth century books and to reflect on the sheer miracle of their material survival in front of me. 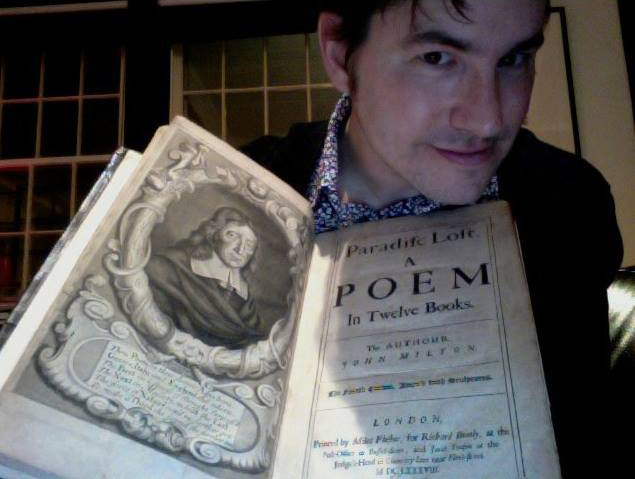 8.) WHERE IS YOUR FAVOURITE PLACE IN THE WORLD?
This is impossible. You already know my hostility to “favorite” as word/concept. In this moment I am thinking with fondness of Unique Thrift, a thrift store in downtown Louisville, Kentucky that has incredibly cheap t-shirts and weird sad old board games and toys, and prosthetic limbs hanging from the ceiling, and country music 8 tracks and old hunting jackets and scratchy LPs. I haven’t been there in years and for all I know it sucks now, but when I was in high school the idea of trawling through Unique Thrift with my friends and laughing at what we found there made me so happy.

9.) IF YOU DIDN’T HAVE YOUR ART WHAT OCCUPATION DO YOU THINK YOU WOULD BE DOING?
I would like to be a psychiatrist or therapist. I have often imagined pursuing that path. I draw upon psychoanalytic ideas in my professional life as an academic and literary critic, but I would like to take that farther. The challenge of being very quiet and just listening to others would be hard for me as I love to talk, but if I had to do something other than what I currently do, that would be it.

10.) IF THERE IS ONE THING THAT YOU WOULD WANT THE WORLD TO KNOW ABOUT YOU THAT YOU HAVE NEVER CONVEYED IN AN INTERVIEW BEFORE WHAT WOULD THAT BE?
I guess I would use the space that you’re offering me to give advice rather than to self-disclose, and maybe that’s gutless and pompous of me since of course advice is itself a form of self-disclosure, but if I get a little more space to talk then I will just say: survival is underrated, and it’s harder than it looks. Realize that the people you think are happy and successful are often struggling inside in ways you can’t see. That’s all.