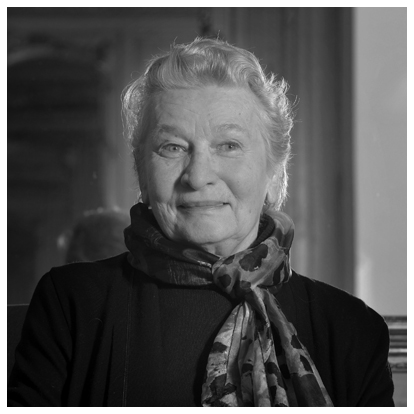 Éliane is a French composer. In the early 50s she became a student of  Pierre Schaeffer, working periodically at the Studio d’Essai and in the early 1960s, she was assistant to Pierre Henry.

Around 1970, she created her first synthesizer-based music using a Buchla synthesizer installed by Morton Subotnick at NYU. Her goal at that point was to create a slow, purposeful “unfolding” of sound.

Until 2000 her work was almost exclusively created on a single synthesizer, the ARP 2500 modular system and tape. Since 2001 she has composed mainly for acoustic instruments.

Only one? Matthew’s Passion. J.S.Bach.

2.) HOW MANY HOURS DO YOU SPEND A WEEK RECORDING/PLAYING/CREATING?
Much less than I used to do when I was working alone with my ARP, but more intensively with the wonderful musicians who bring to me so much.

3.) WHICH OF YOUR OWN CREATIONS IS YOUR FAVOURITE?
The three “NALDJORLAK” with Carol Robinson, Charles Curtis, Bruno Martinez. For the first time, I’ve heard through them, the music I wanted to hear, looking after it through the electronic means, with which the final result was always a compromise with what I could [have] achieved.

4.) WHAT IS YOUR BIGGEST REGRET?
Not being a good instrumentist.

5.) WHAT DO YOU DO TO RELAX?
I listen to classical music, and I love being surprised on “Radio Classic”.

6.) OTHER THAN FRIENDS AND FAMILY WHAT IS YOUR MOST CHERISHED POSSESSION?
Life, as much as it would be possible to keep a mind clear enough until death. (Anyway no possessions will follow)

7.) TELL ME THREE OF YOUR HEROES/HEROINES?
Only Three? 1 and 2 John Cage and Pierre Schaeffer, they opened another way to music listening, in other fields than the conventional ones. We all are somehow their heirs. 3 – from A- as Bob Ashley to Z- as Agnès Zimmermann, quite a lot.

8.) WHERE IS YOUR FAVOURITE PLACE IN THE WORLD?
Where I am.

9.) IF YOU DIDN’T HAVE YOUR ART WHAT OCCUPATION DO YOU THINK YOU WOULD BE DOING?
Architecture, but what a big deal ! Too much. Or science! Even more above my intellectual capacities. So, no regrets.

10.) IF THERE IS ONE THING THAT YOU WOULD WANT THE WORLD TO KNOW ABOUT YOU THAT YOU HAVE NEVER CONVEYED IN AN INTERVIEW BEFORE WHAT WOULD THAT BE?
A surprising question! One I’ve never thought about it before. In fact, surprising questions have been the way I’ve been learning the most about the work I’ve been doing since quite a long time…