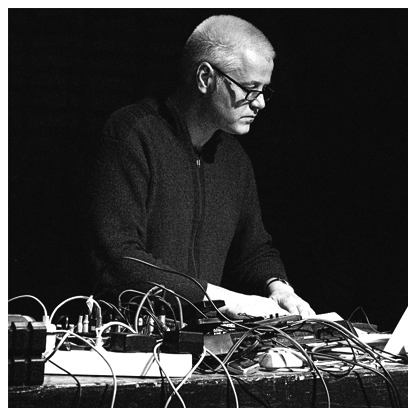 Frans de Waard has been producing music since 1984. He started under the name Kapotte Muziek, he is also the founder of Beequeen (with Freek Kinkelaar), Goem (with Roel Meelkop & Peter Duimelinks) and Freiband. He worked for Staalplaat (1992-2003) and since 1986 is a reviewer for his own publication Vital (now only Vital Weekly) an online music magazine which has been an online source for underground music since 1995.

Liles toured the US with Beequeen in 2003 and de Waard remixed the track ‘Reis’ as Freiband on the Liles remix album ‘In My Fathers House are Many Mansions’.

There is no single record that has had a profound influence on me, that would suggest that this happened some time ago and this single influence would then stretch out for a lifetime. That doesn’t work for me; I think I am always being influenced by whatever old or new music I hear. I may not always absorb it and spit it out, so that it’s clear to see what that influence would be. Plus, and this is for me probably more important, I’m also influenced by people who’s ideas I thought were great, but not necessarily their music. Punk music is one such thing, the whole D.I.Y. thing was of an enormous influence; but also post-punk was a major influence on me, as I thought punk was rather a limited musical form and post-punk in whatever form offered much more freedom. John Cage is a major influence, but I don’t play any of his pieces on a regular basis (or even irregular or even at all). Brian Eno and Conrad Schnitzler, I always loved their approach to sound. Besides that I love early Steve Reich, Dome, Five Or Six, The Legendary Pink Dots, Asmus Tietchens, Illusion Of Safety, Zoviet France, Main, Sparks and Paul McCartney.

2.) HOW MANY HOURS DO YOU SPEND A WEEK RECORDING/PLAYING/CREATING?
Unlike most people who convert their bedroom into a workspace and call it a studio, I use my bedroom as a place to sleep and as I live in a very small place, I have to rent a small workspace at Extrapool. It’s there where I have all my gear, analogue synthesizers, toys, boxes and above all, space to set up and muck about and scare the neighbours. However I am not there a lot. Sometimes not at all for weeks on end, and sometimes a few times a week. It very much has to do with how I work. If there is no forthcoming project, release, rehearsal or even an idea I am simply not there; I very rarely just do stuff as I go to work with a specific plan in mind. At home I have a laptop and iPad and I use these to work with when I have a quick small idea or when I prepare samples to toy around with later. Some of the apps on the iPad are great tools for creating sound, such as the iVCS, Curtis and, a particular favourite, Korg Gadget. Sometimes I work for hours on just doodling about and do that every day, and sometimes not at all. Unfortunately it’s never enough. But as said, almost all come down to having ideas, and thinking about what to do next is almost constant.

3.) WHICH OF YOUR OWN CREATIONS IS YOUR FAVOURITE?
How do you measure favourite? That’s hard, I think. Favourite in terms of a major success in sales, review favourable in magazines or by peers, or because it’s on your iPod and you play your own music for fun? If the latter, on my iPod I have the complete works of my band The Tobacconists and from Wieman various bits and pieces, including ‘Live In Leugen’ and the forthcoming ‘Cryptonesia’ LP (on ini.itu) and the new songs I recorded as QST. The latter mainly to check if I’m still happy with the way the mixes are. I have nothing by Kapotte Muziek, Freiband or Beequeen on my iPod, even when some of their releases are really good. I just don’t always return to them.

4.) WHAT IS YOUR BIGGEST REGRET?
Ah the Christian regret thing. Everyday there is something to regret. Regret what I just wrote, regret getting up early and taking a nap in the afternoon, regret eating the wrong thing. In the larger scheme of things one could say: so it didn’t happen, and then what? The earth is still going, not many other people seem to care about you and your ‘mistake’, so what?

5.) WHAT DO YOU DO TO RELAX?
Until recently I watched TV series most of the evening, after a day of reviewing of experimental music it’s a good thing to unwind. I’ve seen some great ones (the kind that everybody else thinks are great, nothing obscure). Until I realized that I was wasting my time on these. I made a list of a series that I like to see a new season of, a second list of stuff people recommended but I haven’t gotten around to, and keep an eye open for when these things arrive or when I think it’s time to watch something new, and decided to spend my evening to play music from my collection. What do I have, and do I still need it. In the meantime I am reading books, mainly about musicians and/or music. I end the day watching something I may have already watched, but it’s like music: if it’s good we need to watch it again. I think a lot of people who watch TV series and films never return to them, they don’t treat them the way they deserve. There is so much around, we need to make a selection and keep on investigating that.

6.) OTHER THAN FRIENDS AND FAMILY WHAT IS YOUR MOST CHERISHED POSSESSION?
Who says I wouldn’t trade in my friends and family for my ears? Without my ears I would be truly lost. Unlike Beethoven and Smetana I can’t compose music without my ears.

7.) TELL ME THREE OF YOUR HEROES/HEROINES?
I don’t think I believe in heroes or heroines. I couldn’t have anyone I greatly admire for whatever reason, music, art or social wise (leaving out politicians and religious leaders of all kind straight away). Though that girl who won the Nobel peace price last year might be one. Malala Yousafzai just wants to go school, but is not allowed to do so because of some religious belief system. To struggle for that prize (not the Nobel one) takes quite some courage. Otherwise I draw a blank here.

8.) WHERE IS YOUR FAVOURITE PLACE IN THE WORLD?
Home. I don’t mind travelling, I don’t mind touring (I do mind sleeping in a house with cats, but I always forget to mention that) but I am rather happy to be at home. Sitting in my chair, listening to music and reading, playing a bit of my music (not at home sadly, but if I had a bigger house I will surely use the spare bedroom for a studio) and sometimes taking a walk through the woods surrounding sunny Nijmegen, which is the city I was born in and where one day I hope to die. It’s small and everybody knows everybody. It has a small yet excellent scene of musicians.

9.) IF YOU DIDN’T HAVE YOUR ART WHAT OCCUPATION DO YOU THINK YOU WOULD BE DOING?
It’s the question I ask my computer nerd friends of mine in IT business: ‘say without this Internet thing you couldn’t probably survive, right?’ and they stare at me, thinking I am an idiot. I have no idea what I would do. I studied history, and I quite enjoyed digging through stuff in archives. I wasn’t particular good at it, but then some say I am also not very good in music either, so there you go.

10.) IF THERE IS ONE THING THAT YOU WOULD WANT THE WORLD TO KNOW ABOUT YOU THAT YOU HAVE NEVER CONVEYED IN AN INTERVIEW BEFORE WHAT WOULD THAT BE?
I am not as grumpy as you would think. In general people mistake me being critical and questioning stuff as being grumpy or cynical. I’d like to differ: I have a strong opinion and speak my mind. And yes, I am usually a bit more sceptical.