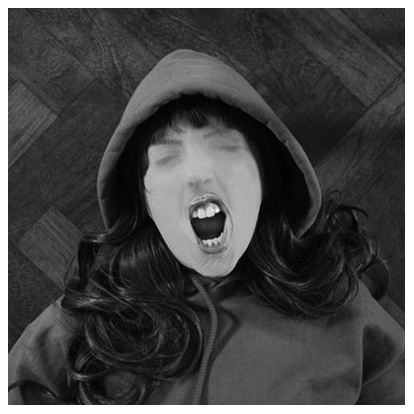 Gazelle Twin is the stage name of Elizabeth Bernholz, a British composer, producer and musician. She takes body dysmorphia, personality dysphoria, the rage felt against disempowerment, the echoes of angry teenage revenge fantasies, nameless but debilitating modern illnesses, hellish hallucinations and converts them to a convincing and overpowering sonic art.
Her debut album, ‘The Entire City’, was released in July 2011 to much critical acclaim.
The Quietus crowned Gazelle Twin’s second album, ‘UNFLESH’ as their Album Of The Year in 2014.

1.) WHICH RECORD HAS HAD THE MOST PROFOUND INFLUENCE ON YOU?
This has changed time and time again probably every 2 years, but I would say that in the last 4 years, I’ve been on/off addicted to Purple Rain by Prince. I can’t really tire of it because like any classic record, it’s like eating a good meal – it satisfies every tastebud.

2.) HOW MANY HOURS DO YOU SPEND A WEEK RECORDING/PLAYING/CREATING?
Not enough lately, I am touring at the moment so most of my time is spent travelling and/or watching things on Netflix during the recovery moments. I look forward to getting stuck into some new work when the schedule loosens up a bit after the Summer.

3.) WHICH OF YOUR OWN CREATIONS IS YOUR FAVOURITE?
I still really enjoy performing and listening to Belly of the Beast – after what must be about 500 or more times. It’s a song I wrote in just a few hours and it came out of a really feral and open state of mind, one that I don’t think I will ever lose now that I sort of bookmarked it with that recording. I’m pretty much taking it as the seed song to propagate my next record.

4.) WHAT IS YOUR BIGGEST REGRET?
Not speaking out to bullies / not fighting back to bullies – in both the deep and recent past.

5.) WHAT DO YOU DO TO RELAX?
The place I currently live in has a wood burning stove, so when I have time to make a fire and sit by it for hours, it’s pretty much all I could want from being alive.

6.) OTHER THAN FRIENDS AND FAMILY WHAT IS YOUR MOST CHERISHED POSSESSION?
Of the natural world, it’s tropical or desert plants – succulents and cacti. I’ve got loads. I’m at the stage where I’m talking to them like pets now.

8.) WHERE IS YOUR FAVOURITE PLACE IN THE WORLD?
I’m a sucker for Italy – all parts, but particularly Venice. I think my soul haunts a bridge somewhere over there, wearing a blue raincoat.

9.) IF YOU DIDN’T HAVE YOUR ART WHAT OCCUPATION DO YOU THINK YOU WOULD BE DOING?
I’d be working with kids and young people, probably working with them to make terrifying music, films and sculptures. I’d like to make a film of my own one day, too.

10.) IF THERE IS ONE THING THAT YOU WOULD WANT THE WORLD TO KNOW ABOUT YOU THAT YOU HAVE NEVER CONVEYED IN AN INTERVIEW BEFORE WHAT WOULD THAT BE?
I have a fair number of classic social anxieties, and one of them is a sort of hypersensitivity to certain sounds, usually ones made by other humans like eating, nail biting, sniffing etc. I think the term for it is Misophonia.