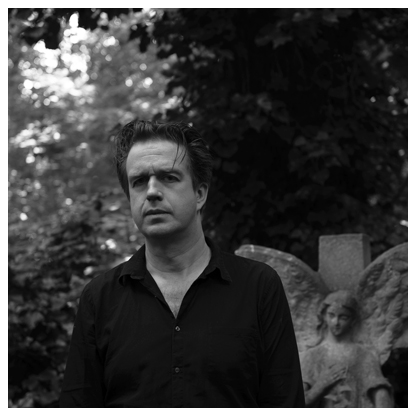 John Doran is the co-founder and editor of The Quietus website. He has written for the BBC, the Guardian, TheWIRE, Metal Hammer, The Stool Pigeon, VICE and many others. He is also an occasional broadcaster for NOISEY and BBC TV and radio. His first book, an autobiography, ‘Jolly Lad’ was published by Strange Attractor in 2015.

There’s limited transference between the way LPs are recorded and the way prose is written in my experience but I often find myself thinking about Hex Enduction Hour by The Fall, Pornography by The Cure, Reign In Blood by Slayer and Why Do They Call Me Mr Happy? by NOMEANSNO when writing. Any album that thrusts me into a different, darker headspace. Having said that, my book, Jolly Lad, was written in silence but on the odd occasion I needed to listen to something on headphones to help concentrate my mind against external distractions it tended to be recordings with a lot of space and depth. Most notably, these were – Sex by The Necks and The Iron Soul Of Nothing by SunnO))) and Nurse With Wound. The most recent record I’ve bought that has a had a definite influence on the way that I write due to its lyrical content is Nothing Important by the English folk singer Richard Dawson.

2.) HOW MANY HOURS DO YOU SPEND A WEEK RECORDING/PLAYING/CREATING?
I spend an insane amount of hours a week working. It’s very rarely less than 80. However this will include doing very uncreative things such as answering emails and trying to drum up work. But when I have a big project on – such as writing a long form essay or a book, I think about it all the time while I’m awake. And I even dream about it as well. I don’t enjoy these periods at all. I think my mind was built for fecklessness… lying on the sofa watching telly… staring at clouds… looking out of the window… So having to concentrate on writing for up to 16 hours a day is not only irritating it gives me a terrible headache and makes me dysfunctional in other aspects of my life. When I’m really into my writing, I can barely dress myself for example.

3.) WHICH OF YOUR OWN CREATIONS IS YOUR FAVOURITE?
I don’t have much to choose from so I’ll have to say Jolly Lad, my memoir about the recovery from alcoholism, substance abuse and mental illness, which was published by Strange Attractor this Summer. And even then I should add the caveat that I regard it like a wilful and hyperactive ginger stepchild. The writing of the book was the most miserable, painful experience of my life and I literally had a nervous breakdown doing it. However now it is out and over and done with I am preparing myself to forgive it, as Uncle Monty said.

4.) WHAT IS YOUR BIGGEST REGRET?
I don’t have any regrets. This isn’t to say that I haven’t wasted massive chunks of my life, been a horrible person or made serious mistakes, it’s just that people with regrets tend to be the sort who are still locked into the same destructive cycles they’ve been in their whole lives. I’m a recovering chronic alcoholic and just before giving up drinking in 2008 at the age of 38, I nearly died twice that year. Personally speaking it would have been a wasted opportunity as I hadn’t really done much with my life (not to mention the bad form of needlessly dying before your parents). Since then I’ve made a (relative and non-financial) success of my website The Quietus, I’ve written and published my first book, I’ve released my first CD (Jolly Lad), my first album (Hubris) and my first cassette (GNOD and John Doran Live At Islington Mill) and also joined a rock band (Arabrot) and been on a lengthy tour. Having regrets is a waste of energy: there’s no point in crying over spilled milk. 99 times out of 100 there’s still time to get stuff done. When you do this stuff relatively late in life (I’m 44) you’re not likely to become rich or famous but that’s OK as far as I’m concerned as I’m old enough now to realise that it wouldn’t have solved any of my problems or brought me happiness. If something’s worth doing it will have purely intrinsic value.

5.) WHAT DO YOU DO TO RELAX?
It sounds like a twatish thing to say but I very rarely relax. It’s difficult to run a site like the Quietus and do all the freelance work that you need in order to be able to afford the luxury of running a site like the Quietus if you’re not thinking about it and working on it all the time. I have a meal with my girlfriend most evenings and we catch up and then watch an episode from a DVD box set (notable recent examples include the final series of Boardwalk Empire and French cop procedural, Engranches) before she goes to bed and I get back on with work. I spend one day a week hanging out with my son but as enjoyable as this is, it’s not really relaxing. I read on public transport – currently Moby Dick by Herman Melville – it’s surprisingly funny and action packed. I’m really enjoying it. I needed a book where something happened after joylessly trudging through My Struggle: A Death In The Family by Karl Ove Knaussgard. I spent so much of the first half of my life ‘relaxing’ that I don’t really feel I have the right to do it anymore. About once every other year this pace of life gets too much and I have to go away to some hotel in the middle of nowhere that has a sauna and swimming pool and do literally nothing for two days until I don’t feel like hoofing myself in front of a train anymore.

6.) OTHER THAN FRIENDS AND FAMILY WHAT IS YOUR MOST CHERISHED POSSESSION?
The thing about being a chronic alcoholic with two and a half decades of heavy substance abuse under your belt, is it strip mines your life of nearly everything – and I don’t just mean your memories, your happiness, your self-respect and your health but also physical possessions. I lost everything from my house down to my record collection the first time round when I was drinking, so most things I own now, I haven’t had for that long really. I’ve got a signed copy of Ace Of Spades by Motorhead framed and hanging on the living room wall, which says, ‘To John, Stay Lucky, from Lemmy.’ I guess I like that a lot but there’s nothing I couldn’t live without.

8.) WHERE IS YOUR FAVOURITE PLACE IN THE WORLD?
Traena. This is a volcanic archipelago, made up of 1,000 islands, skerries and rocky outcrops, off the North West coast of Norway, someway toward Iceland, just on the Arctic Circle. I’ve been there five times during the 24 hour Arctic Summer. I usually stay in a very spartan fisherman’s quarters attached to a Herring factory. I eat a lot of freshly caught seafood and go on long walks. On the weekend I usually stay there, most people head over from the main island by boat to one of the mountains for a Sunday concert. This island is a former cold war military base and was used for spying on the Russians back in the 70’s and 80’s. To reach the radar station you walk up through a steep tunnel which was drilled straight through the middle of the mountain. It has nuclear blast doors at either end. Then when you come out of at the top, you scramble down the side. It’s quite precarious, you always fall over and you’re surrounded by drunk Norwegians letting off fireworks. At the bottom there is a huge cave where Traena’s original settlers lived 10,000 years ago. They have a concert in this cave and this July, it featured an imposing guy called Sysselman playing a 12 foot long Alpine horn through a load of FX, mixed in with field recordings of the sea and local wildlife. I’d love to go there for a few weeks at winter and experience the permanent dark some time.

9.) IF YOU DIDN’T HAVE YOUR ART WHAT OCCUPATION DO YOU THINK YOU WOULD BE DOING?
This is a knotty question for me as I have mixed feelings about what ‘art’ actually is. I consider myself as having a trade – albeit a creative one – rather than an art. To paraphrase the Belgian poet Émile Cammaerts, the trouble with people stopping believing in God isn’t that they believe in nothing, it’s that they’ll literally believe in anything. And art has certainly become a religion among the liberal bourgeoisie – to the extent that a lot of contemporary art, sculpture, dance, avant garde music etc. is essentially seen as being ‘sacred’ or above criticism; which, to me, is extremely unhealthy. However to answer in the spirit of the question; if I didn’t have writing in my life I would have carried on drinking therefore I would be dead and unable to work. However if I had to give up writing in 2015 in reality I’d probably be doing some temping work in an office or data entry and I’d be very unhappy. I guess ideally, if I really had the choice, time and money to retrain, I’d like to work outdoors, as a tree surgeon or building dry stone walls but that really is pie in the sky stuff.

10.) IF THERE IS ONE THING THAT YOU WOULD WANT THE WORLD TO KNOW ABOUT YOU THAT YOU HAVE NEVER CONVEYED IN AN INTERVIEW BEFORE WHAT WOULD THAT BE?
I stole Redrum. I got bored with it after three days and set it loose on Bodmin moor, where it lives happy and free, foraging for shrubs and polo mints, to this very day.