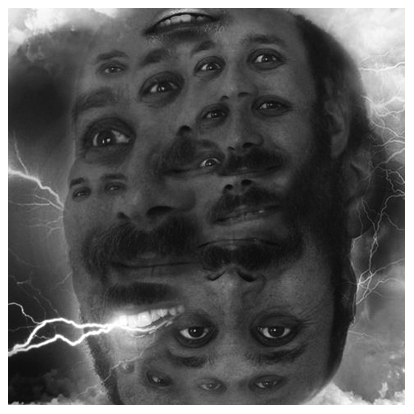 Matt Waldron is the sound artist behind irr. app. (ext.) and a visual artist in a variety of media. Since 2005 he’s been one of the core quartet making up the Nurse With Wound live band and an occasional NWW studio collaborator. Other collaborations include R K Faulhaber, Blue Sabbath Black Cheer, Andrew Liles, At Jennie Richie, Stilluppsteypa, Thomas Carnacki, Petit Mal, Fovea Hex and Faun Fables.

He appears on many Liles albums including SCHMETALING MONSTER OF ROCK, MURDERERS, MANIACS, MADMEN & MONSTERS, MURGATROYD THE MONSTER (A NORTHERN NOIR) and THE VORTEX VAULT.

This answer will brand me as irredeemably uncool (which is unimportant since my own music & artwork, not to mention my winning personality, has achieved that already) but I’d honestly have to say ‘I Robot’, the second album from one of the uncoolest bands in history: the Alan Parsons Project. Plenty of records have influenced me along the way, but this was the first one to really broaden my musical awareness in a substantial way. When I was 12 years old, the song ‘Eye In the Sky’ was getting occasional radio play and I became completely obsessed with it, and this motivated me to gather together my meagre funds and visit the chain record store at the local mall (the only kind of record store accessible to me at the time) to buy a record for myself for the first time in my life. I had to settle for a cassette, since that was all I could afford. It turned out they didn’t have any copies of the ‘Eye In The Sky’ album on cassette, but they did have one called ‘I Robot’ which had a really neat-looking robot illustration on the cover, so I decided to go for that instead. (I still love the cover: it was drawn by George Hardie, who did a lot of great work for the design company Hipgnosis, including Black Sabbath’s ‘Technical Ecstasy’ (another one of my favourite album covers) and the stylised handshake logo for Pink Floyd’s ‘Wish You Were Here’.) When I got home and listened to it, my tiny little consciousness was forever changed.
It probably won’t be understandable to anyone listening to it today, but you have to keep in mind that I was only 12 and had mostly only heard whatever was being played on mainstream radio. Here was a record that started off with a trippy, electronics-oriented instrumental embellished with operatic vocals and choirs before getting to anything conventionally ‘song-like’. A lot of the album is essentially pop music, but it’s never entirely straight-forward: modern/dissonant orchestral & choral arrangements, unusual electronics & textures, sequencers, exotic instruments and location recordings are all blended in, sometimes overtaking the pop element entirely (as in the ‘Total Eclipse/Genesis Ch. 1’ finale). Long before I discovered Pink Floyd, King Crimson or even the more experimental songs by The Beatles (much less Nurse With Wound or anything like that) the APP was pointing the way.

2.) HOW MANY HOURS DO YOU SPEND A WEEK RECORDING/PLAYING/CREATING?
If I’m at home, I’m usually working on some aspect of either music or artwork every day. And I’m at home most of the time: sometimes weeks can go by without my leaving the house. So I’d say on average I spend around 50+ hours a week on creative work. Why would I want to leave the house when I can do that? It’s what I always hoped I’d be doing with my time.

3.) WHICH OF YOUR OWN CREATIONS IS YOUR FAVOURITE?
I can’t really answer that. I’m happy to have amassed a decent catalogue of audio & visual work, but to me it all looks like preparation for what comes next. In some of the things I’ve done I can see the seeds of what I would consider to be genuinely great work, but nothing so far has remotely achieved that. I might never achieve it. I’m not too preoccupied about whether I do or not, but I do wish I were more productive so I could perhaps get a bit closer a little bit faster. And as I get older I see the process as more important than the artifacts: I’d rather enjoy what I’m doing than be a miserable bastard burdened with some notion of a ‘masterpiece’.

4.) WHAT IS YOUR BIGGEST REGRET?
My most overwhelming regret is the unhealthy, misguided mindset I developed in childhood and maintained up until my late 20s/early 30s. I’m still struggling to free myself of the residue of it. I had no practical notion of how to function effectively in the world, how to relate to other people, or how to accomplish anything worthwhile — or what ‘worthwhile’ even meant. Getting things done was always such a struggle, and I never failed to focus on the negative and transfer the blame in any situation. I was mired in destructive religious thinking and the tainted perspective that goes along with it: believing that my life was outside of my control and feeling disempowered and detached from it all. Sometimes I’d indulge in ‘rebellious acts’, but they were always empty, childish gestures that showed that I was still allowing the irrational ideas of the culture around me to dictate my behaviour. I guess that’s a learning process that everyone has to go through in some way, but I can’t help but wish I’d snapped out of it much earlier in life. In my early 30s I came across a very useful quote from Wilhelm Reich: a decent paraphrase of it is that “under unhealthy conditions, unhealthy behaviour becomes perfectly normal”. Understanding that helped me to understand my behaviour a lot better, and continues to help me take a more constructive view of it.

5.) WHAT DO YOU DO TO RELAX?
I like to walk. When I lived in California, I used to live in close proximity to a Redwood forest, and I’d love to take long hikes out there and look for banana slugs. I don’t have easy access to anything as impressive as that in my current neighbourhood in Oregon, and the slugs are much smaller, but there are a few decent places nearby. And sometimes I just want to sit back and watch a movie. But, mostly, I enjoy playing with sounds. I like making visual art, too, but I don’t find it relaxing: it takes a lot more effort than music.

6.) OTHER THAN FRIENDS AND FAMILY WHAT IS YOUR MOST CHERISHED POSSESSION?
I’m still fixated on bits of my record collection. It doesn’t dominate my life like it used to, but I still have near-complete collections of a few favourite projects like Nurse With Wound, Organum, The Hafler Trio and Circle, and I continue to get a bizarre degree of pleasure from this. I wish I could give a better answer, but it wouldn’t be true.

7.) TELL ME THREE OF YOUR HEROES/HEROINES?
Hmmm… well, I don’t really indulge in having ‘heroes’ anymore. Human beings are all small, flawed, temporary creatures, and a complete inability to achieve actual greatness has apparently made us obsessed with continually feigning some version of it. We love to give out awards and build monuments and organise things into ‘best of’ lists — and countless other sad attempts to associate ourselves with the imaginary greatness we pretend to bestow on others. Which, not coincidentally, is also a central motive behind religion: to invent some huge, impressive, absolute authority of some kind and then (of course) claim we’re its own special, glorious creation so we can indulge in the delusion of imaginary greatness through imaginary association.
I suppose the most influential people for me would be Wilhelm Reich, Robert Fripp and Steven Stapleton. Reich is a controversial figure and I can’t really dispute that he got a bit reckless with his claims (and even downright nutty) later in life, but his ideas about the functioning of the human mind & body were the first I encountered that were genuinely relatable to my personal, day-to-day experience, rather than merely sounding clever or pushing some phony, feel-good platitudes. Reich, at least for a time, seemed determined to uncover the stark truth about human behaviour, regardless of the personal cost to himself. He also seems to have been somewhat overbearing in his attitudes, dismissive of anything that contradicted his viewpoint, and increasingly prone to messianic delusions. I’m not going to build a shrine to him as a personality, but his best ideas are still well ahead of where we are as a culture. Robert Fripp was my first major inspiration as a musician, whose ideas helped motivate me to develop enough self-discipline to begin following through with my own creative impulses, while also prompting me to explore the organic, improvisational side of music. And his public journals were very helpful in alerting me to the kind of repulsive dishonesty that pervades the music & creative industries. Fripp also seems to be a bit churlish and severe in his attitudes sometimes, but, as with Reich, I’m happy to take on all the good stuff and leave the personality quirks as an irrelevant aside. Steve has been a great inspiration for me in both the audio and visual spheres: he demonstrated to me how to be completely fearless in one’s work, that genre boundaries (and creative boundaries of any kind) are irrelevant, and he was also the perfect gateway to discovering the work of countless other inspiring sound & visual artists. And he’s a lovely person to be around. I most definitely prefer having him as a friend than as a ‘hero’.
Sorry, no women on the top three list. They’re too scary. But Kate Bush has also been a profound source of inspiration for me.

8.) WHERE IS YOUR FAVOURITE PLACE IN THE WORLD?
I’m mostly eager to visit new places, but if I had to pick amongst the places I’ve already been… I always enjoy spending time at Cooloorta and the Burren in the west of Ireland, and have been there enough times in the past 15 years that it feels like a second home to me. The landscape of the Burren is unique and inspiring — as is Cooloorta itself, of course. There’s also the matter of there being some people who live there that I love. I have to say that I’m a sucker for Yorkshire as well, particularly a little village in the west where a certain bald, surly musician has made his home. The countryside there is so gorgeous and moving to me — and there are also a couple people there that I dearly love, which makes it even more special.

9.) IF YOU DIDN’T HAVE YOUR ART WHAT OCCUPATION DO YOU THINK YOU WOULD BE DOING?
Hanging myself.

10.) IF THERE IS ONE THING THAT YOU WOULD WANT THE WORLD TO KNOW ABOUT YOU THAT YOU HAVE NEVER CONVEYED IN AN INTERVIEW BEFORE WHAT WOULD THAT BE?
I’d want all the ladies out there to know that my penis is made of magic and is capable of doing things beyond their most fevered imaginings.
And I can play a vaguely-in-tune version of ‘Popcorn’ by clicking my thumbnail against my front teeth. Take your pick.