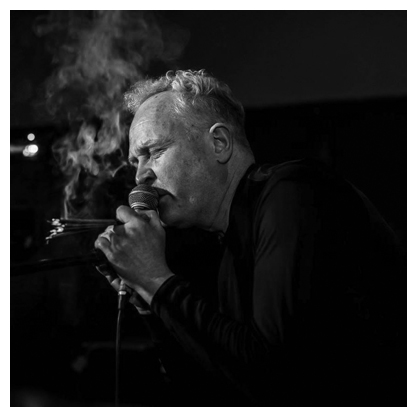 Martin formed Attrition in Coventry, England in 1980. The band emerged from the experimental post-punk scene of the early 1980’s and contributed to the development of industrial music in the UK.

1.) WHICH RECORD HAS HAD THE MOST PROFOUND INFLUENCE ON YOU?
The Sex Pistols “Anarchy in the UK”, it was a rallying cry to the lost and angry teenage me. I don’t know if I would have done anything in music without that.

2.) HOW MANY HOURS DO YOU SPEND A WEEK RECORDING/PLAYING/CREATING?
Never enough. I spend a lot of time producing other people in The Cage. but never enough on my own… perhaps that keeps it special.

3.) WHICH OF YOUR OWN CREATIONS IS YOUR FAVOURITE?
That would change with the seasons…. but for now I shall pick “Fate is Smiling” from the second album. “Smiling, at the Hypogoner club”. 1985

4.) WHAT IS YOUR BIGGEST REGRET?
In April 1980 thinking that I would catch Joy Division next time they played…

5.) WHAT DO YOU DO TO RELAX?
I do enjoy filling in questionnaires …. or cooking… I do like cooking a lot… its another creative outlet as long as it doesn’t burn…

6.) OTHER THAN FRIENDS AND FAMILY WHAT IS YOUR MOST CHERISHED POSSESSION?
My studio, my Cage!

7.) TELL ME THREE OF YOUR HEROES/HEROINES?
Marcel Duchamp, David Lynch, Crass (can I have a band here?)

8.) WHERE IS YOUR FAVOURITE PLACE IN THE WORLD?
That place between waking and sleep where I can know so much more about me.

9.) IF YOU DIDN’T HAVE YOUR ART WHAT OCCUPATION DO YOU THINK YOU WOULD BE DOING?
I have no idea whatsoever! Can this one be a multiple choice question?

10.) IF THERE IS ONE THING THAT YOU WOULD WANT THE WORLD TO KNOW ABOUT YOU THAT YOU HAVE NEVER CONVEYED IN AN INTERVIEW BEFORE WHAT WOULD THAT BE?
If after all this time there was still something I hadn’t told the world then there is probably a very good reason for it.