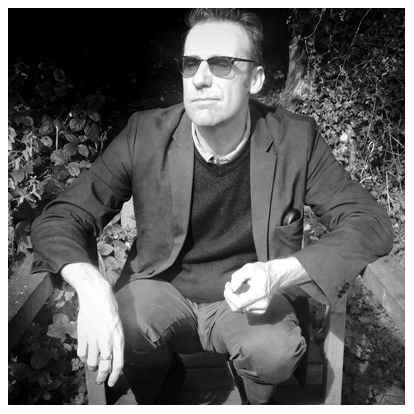 Michael Begg formed Human Greed in 1999. After being joined by Deryk Thomas they released Consolation in 2001. Pilgrim: New World Homestead followed in 2006 and in 2009 Black Hill: Midnight at the Blighted Star, which featured guest contributions from Julia Kent, Clodagh Simonds, David Tibet and Fabrizio Palumbo.

Dirt on Earth (2012) was greeted as a milestone release.

After Dirt On Earth Begg collaborated extensively with the Moscow theatre company blackSKYwhite, resulting in the internationally performed show OMEGA, and the accompanying soundtrack release OMEGA.ost

In 2014 Human Greed released their most compelling and accomplished musical statement to date, World Fair, which featured contributions from Chris Connelly (RevCo, FiniTribe) Colin Potter (NWW) and Steven R. Smith. The release made the Brainwashed.com end-of-year list, and was hailed album of the year by the UK’s Was Ist Das, and Belgium’s Dark Entries.

1.) WHICH RECORD HAS HAD THE MOST PROFOUND INFLUENCE ON YOU?
Side 2 of Brian Eno’s Discreet Music. It’s his methodical, clinical dis-assembling of a formal piece of music (Pachabel’s Canon in D). I really didn’t ever care about the process, the method or the science underpinning the whole thing – but the results just wipe me out. It is only very seldom that I can actually play the record. It just sends me screaming back to late, snowy nights spent walking too far from home, to the very mechanism that bound me together, to a smothering, blissful nostalgia that just makes me want to cry and cry. Only when I put on a few years subsequent to my first exposure to it did I engage with the whole notion of pulling and teasing things apart and letting them slide together again in order to be surprised by random and not-so-random collisions.

2.) HOW MANY HOURS DO YOU SPEND A WEEK RECORDING/PLAYING/CREATING?
The same amount of time that the pope spends shitting in the woods. I really have no idea. I am engaged every day, but some days the engagement might not be so clear to the casual observer. Suffice to say that probably the biggest tension in my marriage and in my relationship with my sons is the efforts they have to go to in order to get me out of the studio – and the moods which grip me if I am denied my retreat to that space.

3.) WHICH OF YOUR OWN CREATIONS IS YOUR FAVOURITE?
Lets say *musical* creations to keep my kids sweet, ok? My own creations, frankly, are acts of voiding. The product of having to wring, squeeze and heave some dark thing out of the system, so that doesn’t lend itself to having a favourite, merely a sense of relief each time a record is finished. Rather, what gives me the biggest thrill and the warmest pleasure are those moments where I have managed to draw from a fellow traveller a remarkable contribution to my records; Julia Kent’s cello arrangement of the Fortress Longing chord sequence on The Green Line, Steven R. Smith’s coruscating guitar and spike fiddle on World Fair’s Chrysler, Clodagh Simond’s piano improvisation that closes Black Hill, these efforts that folk have contributed just thrill me so much – they bring a neurotic outburst out of the swamp and accord it a degree of dignity that just makes me shine like chrome. Lovely, lovely souls each and every one.

4.) WHAT IS YOUR BIGGEST REGRET?
1980 – using Dulux gloss on a homemade Killing Joke template. Man, that was one uncomfortable T-Shirt. Smelly, too. A few nights in hotels that could have gone one way or the other – and I wish they’d gone the other. A certain evening, by a certain river, with a certain (at the time) famous actress – I kind of regret that, but only kind of. I vaguely regret that being a country mouse prevented me from engaging fully with the activity that was going on around me when I went into town as a youngster. I am incredibly sad that there was nothing I could do to prevent cancer claiming one of my dearest friends, but I suppose a regret is something that perhaps you had the chance of avoiding, or concluding differently. I can’t help but feel regret for losing touch with one or two folk I met through music who no longer keep in touch. Nuff said.

6.) OTHER THAN FRIENDS AND FAMILY WHAT IS YOUR MOST CHERISHED POSSESSION?
I wanted a Fender Jaguar for so many years – and now I have one. I also have a fragment of terracotta from a Minoan honey amphora which I stole from Knossos on Heraklion. A black Elysee pen that Paul Bowles used to sign one of his books for me when I imposed myself upon him in Tangier. Each of my finger rings has a story to tell.

8.) WHERE IS YOUR FAVOURITE PLACE IN THE WORLD?
In the shadow of Black Hill, in the Pentland hills, south west of Edinburgh. I am partly, biologically, made from that hill, you know.

9.) IF YOU DIDN’T HAVE YOUR ART WHAT OCCUPATION DO YOU THINK YOU WOULD BE DOING?
Now, I know you don’t have time for anything remotely pretentious or self consciously “arty” but I have to take you up on correlating ART with OCCUPATION. Occupation is whatever has to be done to keep my family afloat and out of debtors jail and free from rickets and scurvy. To that end, I’ll do whatever it takes. Art is different. It has no alternative. You see, there are, in my less than humble opinion, two interpretations of creativity – that of science and that of art. The science view of creativity is that it is to do with expression, sharing, finding an exciting medium through which to share an experience on common ground and unleash potential and yadda yadda yadda. Whereas the art perspective on creativity is that it is an unending process of engagement with neurosis, anxiety, fear and dislocation – trying to find some means of bringing something REAL into the world that has hitherto remained hidden. My friend from blackSKYwhite, Dimitry, refers to it as being in a garden of bare dirt, and scratching away at the frozen ground with your fingernails until you come upon a mysterious surface – glass – and it turns out to be a box, with something inside – and you keep scratching and clawing at it until the box becomes clear. But the process is so long that by the time the box is clear and the contents realised it already seems familiar, commonplace. And you wonder to yourself – when did I bury this box? Why did I lose it in the ground? What else have I buried?

10.) IF THERE IS ONE THING THAT YOU WOULD WANT THE WORLD TO KNOW ABOUT YOU THAT YOU HAVE NEVER CONVEYED IN AN INTERVIEW BEFORE WHAT WOULD THAT BE?
I always try so hard to be benign in interviews, so… I am singularly resentful, bitter, seething with rage and leaking puss and bile from every pore that the clique of on-trend cunts that lead the underground/left field/avant garde/experimental electronica/sound art promoter/club/label circuit accord me so little attention while gushing endlessly over equally on-trend crud that is fit for nothing but the garbage disposal. They are fucking worthless pond life hipster cunts to a (wo)man and I wish them every enmity. I hope they choke on their own vinyl. They have killed music. They have killed my will. Music is Dead. Long live music.