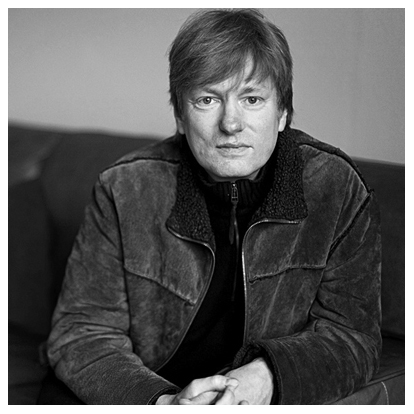 Michel is the author of the Whitbread-shortlisted novel Under the Skin which was brought to the big screen in 2014 by Jonathan Glazer. He is also the author of the highly acclaimed The Crimson Petal and the White, which was adapted into a four-part TV series for the BBC in 2011. He has also written the novellas The Hundred and Ninety-Nine Steps (2001) and The Courage Consort (2002) and has won several short-story awards, including the Neil Gunn, Ian St James and Macallan. His latest book is The Book of Strange New Things (2014).

Born in Holland, brought up in Australia, he now lives in the Scottish Highlands.

Michel has collaborated with Liles on the album ‘Ohwurm’ and the forthcoming E.P. ‘A Million Infant Breaths’.

I’m constantly seeking out new music that’s unfamiliar to me so I don’t revisit an awful lot. I remember that A YOUNG PERSON’S GUIDE TO KING CRIMSON – the one with the fab Fergus Hall cover  was pretty important to me as a 16-year-old. Before that, I was entranced by ‘Revolution No.9’ on the Beatles’white album. Most people regarded that track as proof that the Beatles had lost the plot. I was just intrigued by it as a sound collage and I have no doubt that it put me on the road towards Nurse With Wound and Current 93.

2.) HOW MANY HOURS DO YOU SPEND A WEEK RECORDING/PLAYING/CREATING?
Before my wife Eva got sick, many. After she died, very few.

3.) WHICH OF YOUR OWN CREATIONS IS YOUR FAVOURITE?
Possibly a short story called ‘The Fahrenheit Twins’. But I’m proud of everything I’ve done. I wouldn’t have put it out there if I wasn’t.

4.) WHAT IS YOUR BIGGEST REGRET?
Not keeping a diary during the 26 years I was with Eva.

5.) WHAT DO YOU DO TO RELAX?
Database my comics and music collection.

6.) OTHER THAN FRIENDS AND FAMILY WHAT IS YOUR MOST CHERISHED POSSESSION?

7.) TELL ME THREE OF YOUR HEROES/HEROINES?

I’m not the hero-worshipping kind, but there are artists whose work I particularly admire. I like the way the Beatles, when they got fantastically famous and successful, did not go down the obvious route for pop performers of their era – playing Las Vegas for hugely inflated ticket prices, etc – but decided instead that it would be fun to shake everything up and transform the musical landscape beyond recognition. You can just imagine Caesar’s Palace saying, “Hey guys, why not put on a tux and sing ‘Michelle’for us?” But the lads were busy playing Mellotrons backwards, creating tape loops and collaborating with Indian musicians.

8.) WHERE IS YOUR FAVOURITE PLACE IN THE WORLD?
Bed, while sleeping. Utrecht is pretty good too.

9.) IF YOU DIDN’T HAVE YOUR ART WHAT OCCUPATION DO YOU THINK YOU WOULD BE
DOING?
Nursing.

10.) IF THERE IS ONE THING THAT YOU WOULD WANT THE WORLD TO KNOW ABOUT YOU
THAT YOU HAVE NEVER CONVEYED IN AN INTERVIEW BEFORE WHAT WOULD THAT BE?
The first LP I asked my parents to buy for me, as a birthday present way back in 1974, was Olivia Newton John’s ‘First Impressions’. I liked it, too. Spooky, breathy backing vocals on Ámoureuse’ which, for the 14-year-old me, were as close to an Andrew Liles remix as it got….