Michele Howarth Rashman is an artist specialising in figurative mixed media sculpture. Born in Liverpool she now lives in Yorkshire. She has developed a process of work meticulously hand stitching larger than life-size sculptures. Her work has been shown both nationally and internationally alongside many of her more celebrated contemporaries, however Rashman remains an elusive figure, working alone and exhibiting rarely. She describes her art as a ‘defiantly unmanly method of working in a persistently macho art world’.

1.) WHICH RECORD HAS HAD THE MOST PROFOUND INFLUENCE ON YOU?
I can vividly remember being in my childhood home in Liverpool when ‘Michelle’ by the Beatles first played on the radio, and my mother telling me it was ‘MY’ song. Thing is I took this to mean literally, believing it to be written about and for me. I’d have been about three years old at the time. It was at that exact moment that megalomania set in.

2.) HOW MANY HOURS DO YOU SPEND A WEEK RECORDING/PLAYING/CREATING?
It entirely depends on the weather, my mood, nuisance friends and the health of my cats.

3.) WHICH OF YOUR OWN CREATIONS IS YOUR FAVOURITE?
A large piece I did in 2011 called ‘She Still Calls Herself Mrs’. It must be good because like all of my best works it remains unsold, in my living room. 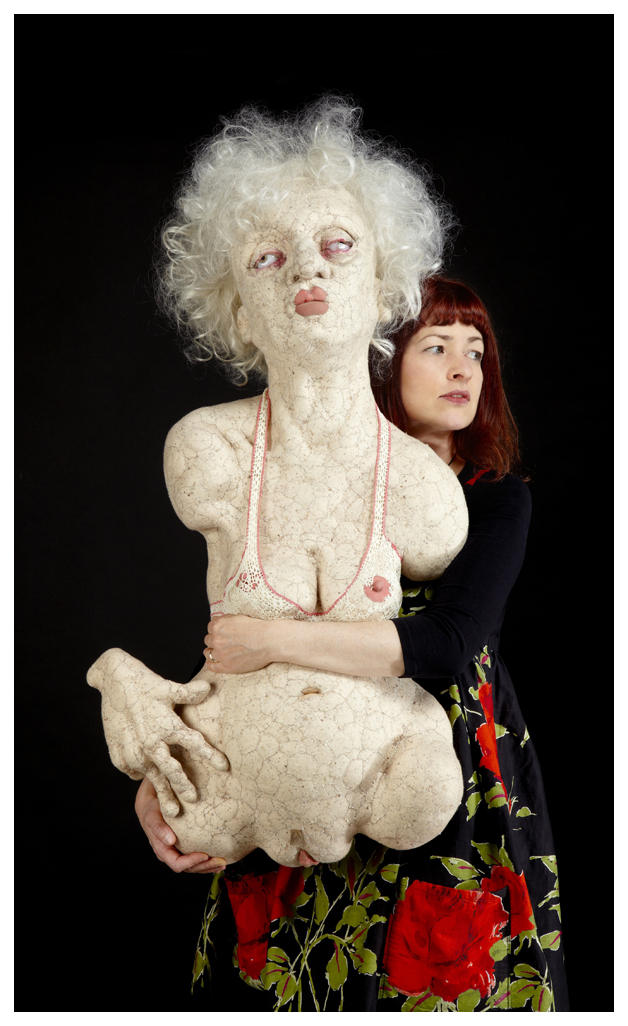 ‘She Still Calls Herself Mrs’ held by Michele.

4.) WHAT IS YOUR BIGGEST REGRET?
Not looking after my teeth in childhood. (Same is true for posture).

6.) OTHER THAN FRIENDS AND FAMILY WHAT IS YOUR MOST CHERISHED POSSESSION?
A magazine I wrote when I was seven or eight. It was for a competition at school and the prize was a tin of toffees in the shape of a London bus. My entry was 40 pages long and I remember slapping it down on the teacher’s table knowing I’d blown all the competition out of the water. I found it recently and it’s page upon page of death and destruction. I won the toffees though*.

*Probably the last fair and just decision of my professional life.

7.) TELL ME THREE OF YOUR HEROES/HEROINES?
Whistleblowers, the Hillsborough families and the woman who runs Yorkshire Cat Rescue.

8.) WHERE IS YOUR FAVOURITE PLACE IN THE WORLD?
Until about three weeks ago**, my studio.

9.) IF YOU DIDN’T HAVE YOUR ART WHAT OCCUPATION DO YOU THINK YOU WOULD BE DOING?
I worked at a dating agency for nine years. I quite enjoyed prying into people’s lives, so it would have to be something with an element of intrusiveness.

10.) IF THERE IS ONE THING THAT YOU WOULD WANT THE WORLD TO KNOW ABOUT YOU THAT YOU HAVE NEVER CONVEYED IN AN INTERVIEW BEFORE WHAT WOULD THAT BE?
I do a passable Joan Armatrading impersonation.