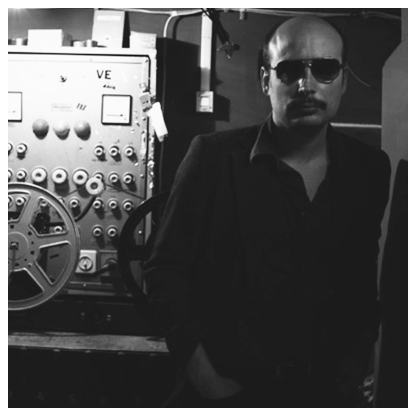 Peter Strickland was born in 1973 to a Greek mother and British father, and grew up in Reading, Berkshire. He is a director and writer, known for Katalin Varga (2009), Berberian Sound Studio (2012), Björk: Biophilia Live (2014) and The Duke of Burgundy (2014). He is also a member of The Sonic Catering Band and runs his own record label, Peripheral Conserve. For most of the last decade he has lived in Eastern Europe.

Liles worked on sound design for Berberian Sound Studio which was released on 10″ in 2014 as The Equestrian Vortex. Along with several remixes for the Peripheral Conserve label Liles has also remixed Peter’s group The Sonic Catering Band.

‘I Wish I Never Saw The Sunshine’ by The Ronettes for taking misery to delirious, operatic heights.

2.) HOW MANY HOURS DO YOU SPEND A WEEK RECORDING/PLAYING/CREATING?
If I’m answering these questions then it’s obvious not enough time is being spent on actual work.

3.) WHICH OF YOUR OWN CREATIONS IS YOUR FAVOURITE?
It’s too difficult to gauge any work I’ve done in terms of whether it’s good or bad. I tend to judge my films purely on the experience I had making them.
The Duke of Burgundy is my favourite purely because we mostly had a blast making it. Pretty much every stage of the film was thoroughly enjoyable and that’s never happened before. Of course, there were bad days as there are with any job, but I have very fond memories of the process and of the great support and trust to make a particular film in a particular manner.

4.) WHAT IS YOUR BIGGEST REGRET?
Not keeping up my Greek. I’m half-Greek and it’s frustrating that I struggle with the language. I only have myself to blame. I also regret getting involved with certain people regarding work. I’m partly to blame for ignoring the warning signs.

5.) WHAT DO YOU DO TO RELAX?
Swim. I don’t count the lanes I’ve done or any such ‘upkeep’, as that would be too depressing. I just swim as fast as I can for forty minutes and that tends to clear my head and take away any stress. There’s a really good pool in my neighbourhood with 50m lanes, but the etiquette is atrocious. I’ve witnessed and been the butt of just about every conceivable act of inconsiderate behaviour that a human being could get away with in water, which means I often leave the pool more stressed and wound-up than when I entered.
That’s a long way of saying I don’t relax.

6.) OTHER THAN FRIENDS AND FAMILY WHAT IS YOUR MOST CHERISHED POSSESSION?
My Braun Nizo 148XL Super 8 camera. I bought it for £15 in 1990 and it’s been a trusty companion since then. I’ve even slept with it.

8.) WHERE IS YOUR FAVOURITE PLACE IN THE WORLD?
I’ll be predictable and say New York.
I first visited when I was 21 in 1994 and it was surprisingly easy to make friends there. Friendships were based on curiosity and wonder instead of social status or any other hierarchy.
I remember seeing Crash Worship play at The Cooler in the meat packing district and having a bucket of pigs’ blood thrown at me. That made me fall in love with New York, though if it happened now in my forties it’d probably put me off the place for life.

9.) IF YOU DIDN’T HAVE YOUR ART WHAT OCCUPATION DO YOU THINK YOU WOULD BE DOING?
Either teaching or public information films on swimming pool etiquette. I used to love teaching English to office workers during evenings. You have to give so much of yourself when you teach that you forget all your problems.

10.) IF THERE IS ONE THING THAT YOU WOULD WANT THE WORLD TO KNOW ABOUT YOU THAT YOU HAVE NEVER CONVEYED IN AN INTERVIEW BEFORE WHAT WOULD THAT BE?
Just that I’m more grateful to audiences than I let on. To have people spare their time and money to see your work is something very special, which you can never take for granted. I’ve been overwhelmed recently with the amount of good will from the audience and I’m not very good at showing my appreciation. If I could be nicer to my viewers and nastier to my fellow swimmers, that would be an achievement.