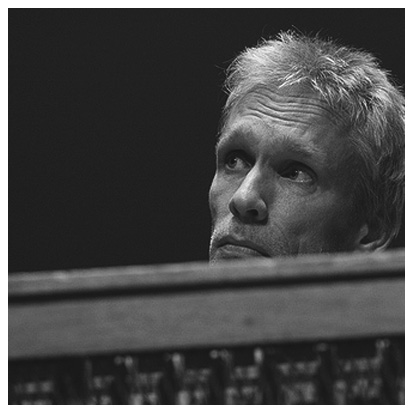 Reinier van Houdt is a virtuoso pianist who studied piano at the Liszt-Akademie in Budapest and the Royal Conservatory in The Hague. He has built himself an unusual repertoire from collaborations with composers and musicians, archive research and unorthodox studies of classical music. He has premiered music by Robert Ashley, Alvin Curran, Kaikhosru Shapurji Sorabji, Francisco López, Charlemagne Palestine, Yannis Kyriakides, Maria de Alvear, Jerry Hunt, Michael Pisaro and Walter Marchetti. He has also worked with John Cage, Alvin Lucier, Luc Ferrari, Olivier Messiaen, Current 93 and Christian Marclay.

1.) WHICH RECORD HAS HAD THE MOST PROFOUND INFLUENCE ON YOU?
Through the years it’s been constellations of records that I’ve been obsessing over: music that bypasses all the conceivable possibilities & varieties of style and genre:
Robert Ashley: Automatic Writing
Nurse With Wound: Soliloquy For Lilith
Andrew Chalk/Giancarlo Toniutti: Tahta Tarla
Tony Conrad: Slapping Pythagoras
Current 93: Nature Unveiled
Also Edwin Fischer playing Bach.

2.) HOW MANY HOURS DO YOU SPEND A WEEK RECORDING/PLAYING/CREATING?
Physically my limit is at 6 hours a day, but it’s pretty much always on my mind.

3.) WHICH OF YOUR OWN CREATIONS IS YOUR FAVOURITE?
Something that is strictly speaking not my own but I made this my own creation: I deciphered, studied and performed a manuscript of a 5 hour composition by Kaikhosru Shapurji Sorabji. I’ve worked on it for 5 years and played it in concerts in 2003. A release of a live-recording is in the works.

4.) WHAT IS YOUR BIGGEST REGRET?
I just regret that I can’t work faster than I do.

5.) WHAT DO YOU DO TO RELAX?
Being with my girlfriend, taking the dogs for walks, hanging out, drinking and eating with friends.

6.) OTHER THAN FRIENDS AND FAMILY WHAT IS YOUR MOST CHERISHED POSSESSION?
Not surprising: my piano. But not because it’s a special piano or brand or something, but just because I have a piano in my studio. It’s the focal point and kind of a totem for all my work in music.

7.) TELL ME THREE OF YOUR HEROES/HEROINES?
Quentin Meillassoux – he opened up the world of thought to the great outdoors again, where human existence is no more likely than that of a spaghetti-monster, and where miracles prove the non-existence of a god.
Robert Ashley – a hero for raising, writing and making music to a surreal level, encouraging and inspiring many people he met on the way.
Eliane Radigue – a heroine for developing and adding so much more dimensions to early electronic music.

8.) WHERE IS YOUR FAVOURITE PLACE IN THE WORLD?
At the moment it’s Los Angeles.

9.) IF YOU DIDN’T HAVE YOUR ART WHAT OCCUPATION DO YOU THINK YOU WOULD BE DOING?
So many possibilities, I don’t know how feasible they would be right now though. To pick one: working with animals. Or: physics, cooking, philosophy, mathematics, running a music-venue, brewing beer. But without art I also might very well be an addict of some sort.

10.) IF THERE IS ONE THING THAT YOU WOULD WANT THE WORLD TO KNOW ABOUT YOU THAT YOU HAVE NEVER CONVEYED IN AN INTERVIEW BEFORE WHAT WOULD THAT BE?
I have no idea. I’m part of the world, but I’m kind of obsessed with stepping into areas where people don’t go. So there’s a pretension there, I guess. The world is deeply flawed, full of faulty ideas, pointless suffering and death, but I don’t think it is a closed stable logical system. I look for a step beyond.