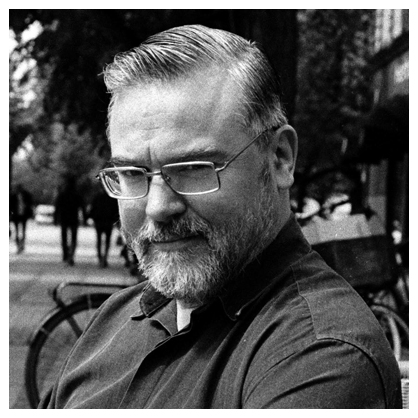 Stephen is a writer and musician born in Lancashire. In 1985 he began writing reviews for the seminal horror magazine Shock Xpress before launching his own film periodical Eyeball in 1989. His first book, Beyond Terror: The Films of Lucio Fulci, was published in 1999, followed by The Eyeball Compendium (2003) and Nightmare USA: The Untold Story of the Exploitation Independents (2007). His most recent work is Murderous Passions; The Delirious Cinema of Jesús Franco.

As a musician he is renowned for his work with Coil, and his current bands Cyclobe (with partner Ossian Brown) and UnicaZürn (with David Knight).

In terms of one single jolt, probably “Virginia Plain” by Roxy Music. Hearing it was like someone switching on a whole new segment of my brain and flooding it with energy. Exciting, raucous, exotic, weird, joyous, mysterious. The day before I heard it, on Radio Luxembourg, I was a kid vaguely mucking around in a world with no definition; the day after, I was obsessed. And of course suddenly I had really great taste in music (this has never deserted me).

But “Virginia Plain” hasn’t influenced my recorded work very much. At a subliminal level, the most influential music for me growing up in the late 1960s and early 1970s was the BBC Radiophonic Workshop’s incidental music for Doctor Who. The best example is Malcolm Clarke’s score for “The Sea Devils” (1972) – total synth madness. For years I kept my memories of old Doctor Who in a different category to my musical tastes, but when some CDs of the Radiophonic Workshop came out in the 1990s it dawned on me how influential those scores had been. Strange sounds and uncanny sensations.

I’d also like to pay my respects to a United Dairies album that struck a chord (if that’s the right word) in my late teens: “Rapid Eye Movements” by Operating Theatre (aka Roger Doyle). Sometimes, when I’m working on longer pieces, I often find myself thinking of that album: a multi-levelled trip through another consciousness.

2.) HOW MANY HOURS DO YOU SPEND A WEEK RECORDING/PLAYING/CREATING?
I don’t work at a constant rate. I can go for weeks and weeks doing nothing, and then suddenly it’s all systems go, working ten or twelve hours a day for a couple of weeks. It’s all or nothing really, I can’t seem to do it in dribs and drabs.

3.) WHICH OF YOUR OWN CREATIONS IS YOUR FAVOURITE?
One song: “If You Want to See That Nothing Is Left” from The Visitors.
One album: Wounded Galaxies Tap at the Window.
Or if I can choose something that I listen to for fun, my disco music for the film Trouser Bar.

4.) WHAT IS YOUR BIGGEST REGRET?
The need for abstinence.

5.) WHAT DO YOU DO TO RELAX?
I like to watch recordings of the old in-out-in-out.

6.) OTHER THAN FRIENDS AND FAMILY WHAT IS YOUR MOST CHERISHED POSSESSION?
If friends and family could be considered possessions then I guess cats could be too, in which case it’s my three cats. Not that they are my possessions – quite the opposite!

I don’t really have cherished possessions. I have stuff that I like, but if I had to let it go I’d be fine. My only cherished possessions are the external hard drives my work is stored on. If there was a fire, and all my stuff went up in flames, the only things I’d get emotional about would be those.

8.) WHERE IS YOUR FAVOURITE PLACE IN THE WORLD?
Simple answer: home. Apart from that, Winnats Pass near Castleton in Derbyshire, as seen in The Living Dead at Manchester Morgue. I’ve been there twice to visit, and it’s even more majestic and eerie in real life.

9.) IF YOU DIDN’T HAVE YOUR ART WHAT OCCUPATION DO YOU THINK YOU WOULD BE DOING?
Astronomy, perhaps, with a PhD in Beardy Mumbling.

10.) IF THERE IS ONE THING THAT YOU WOULD WANT THE WORLD TO KNOW ABOUT YOU THAT YOU HAVE NEVER CONVEYED IN AN INTERVIEW BEFORE WHAT WOULD THAT BE?
Sleazy and I once rigged up a photo-electric motion detector so that whenever John Balance walked into his sitting room chez Coil, two-bars of chintzy scene-linking music from The Golden Girls would play.