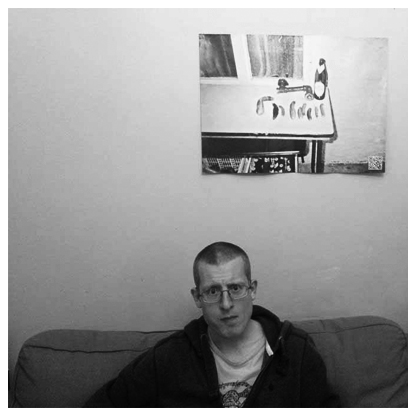 Zeke Clough is responsible for some of electronic music’s most shockingly morbid and detailed sleeve art. His twisted designs came to define the aesthetic of Skull Disco, the groundbreaking Dubstep label. Clough has also been commissioned to provide the art for Kevin Martin’s (of the Bug / King Midas Sound) Acid Ragga label, and has had exhibitions in Berlin, Tokyo and Manchester.

1.) WHICH RECORD HAS HAD THE MOST PROFOUND INFLUENCE ON YOU?
Tough one this, maybe ‘Songs the Lord Taught Us’ by The Cramps, not the first Cramps album I heard, but much loved and it opened my ears up to their influences, plus I find their music relaxing.

2.) HOW MANY HOURS DO YOU SPEND A WEEK RECORDING/PLAYING/CREATING?
Not sure, everyday tasks seem to take me a long time, but when there aren’t any other obligations I’m usually drawing, also I take a sketchbook with me when I’m out and about to draw in.

3.) WHICH OF YOUR OWN CREATIONS IS YOUR FAVOURITE?
Either the cover to the Ekoplekz album, ‘Unfidelity’ as it opened a new world of pencil crayon powered marine futurism. Or the comic strip I’m just finishing as it has a sustained narrative that I’ve found a very good distraction to the usual troubling thoughts I’m plagued with.

4.) WHAT IS YOUR BIGGEST REGRET?
My regrets are so monumental and numerous that they’ve coalesced into a vast, amorphous worry blob, that manifests as a nagging ache in the back of my head. To counter this I’ve developed a form of voluntary amnesia, so can no longer remember what I regretted, not good for learning from your mistakes I suppose, but it’s better than the alternative.

5.) WHAT DO YOU DO TO RELAX?
Nothing terribly exciting, I read comics and books, go for walks, mess around on the computer, socialise or do some drawing, I like talking and drawing in the pub.

6.) OTHER THAN FRIENDS AND FAMILY WHAT IS YOUR MOST CHERISHED POSSESSION?
Probably small sketches that people have given me, as a drawing is a window into a person’s mind and these drawings are from people I like, they make me happy to look at. Also that someone’s actually bothered to sit down and draw a picture then give it to me. They don’t have to be ‘good’ drawings either, ones by non-artist friends can be equally valued and are often more entertaining.

7.) TELL ME THREE OF YOUR HEROES/HEROINES?
Because of the accessibility of formerly remote people on the internet which along with my advanced age of 42 has utterly trampled any romantic notions I may have been nursing about former heroes, I’m not sure I have any left. However, there are artists whose work I greatly admire. So Roberto Matta, King Terry and Basil Wolverton to name three of many, also the divers I watch on nature programmes who dive with Humbolt Squid at night or Great White Sharks, I admire them.

8.) WHERE IS YOUR FAVOURITE PLACE IN THE WORLD?
There isn’t one particular place, I love the countryside around Calderdale a lot though and liked it in Tokyo when I went there in 2011, especially the concrete waterways that were lined with trees that had big ravens in them, that was good.

9.) IF YOU DIDN’T HAVE YOUR ART WHAT OCCUPATION DO YOU THINK YOU WOULD BE DOING?
No idea, I lose the will to do anything if I don’t draw regularly, as melodramatic as that may seem. I’d like to say ‘marine biologist’ as that’s what I wanted to do when I was a kid, but I don’t have the dedication or the brains and can’t even swim.

10.) IF THERE IS ONE THING THAT YOU WOULD WANT THE WORLD TO KNOW ABOUT YOU THAT YOU HAVE NEVER CONVEYED IN AN INTERVIEW BEFORE WHAT WOULD THAT BE?
That I’m not the deranged maniac my art might suggest, I’m actually polite and unassuming, (I just see the world inwardly with a rabid desperation).