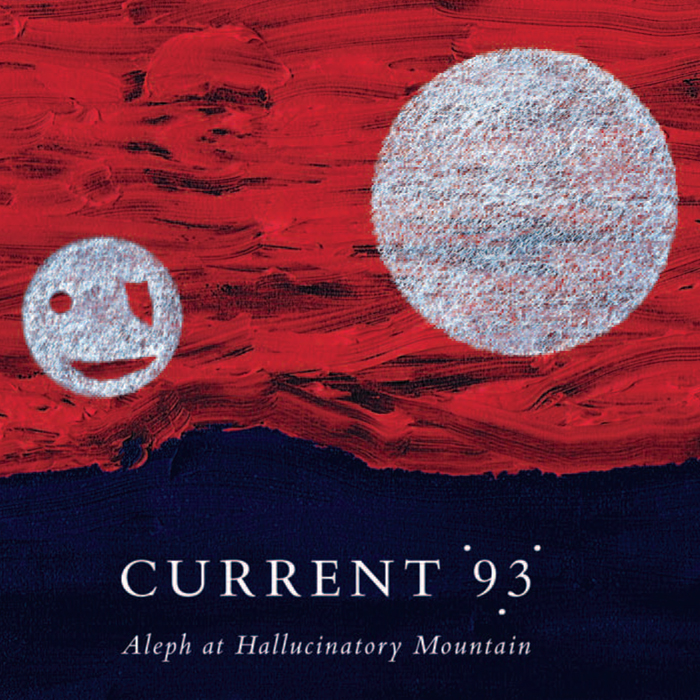 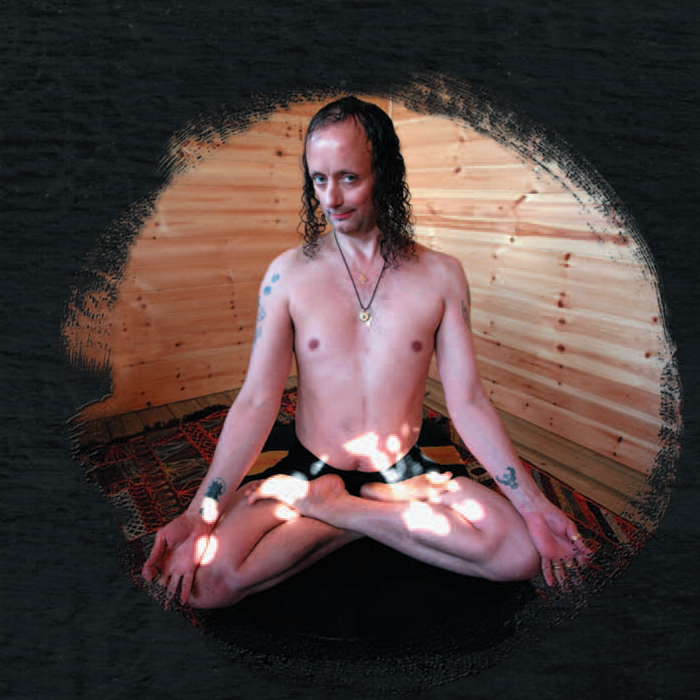 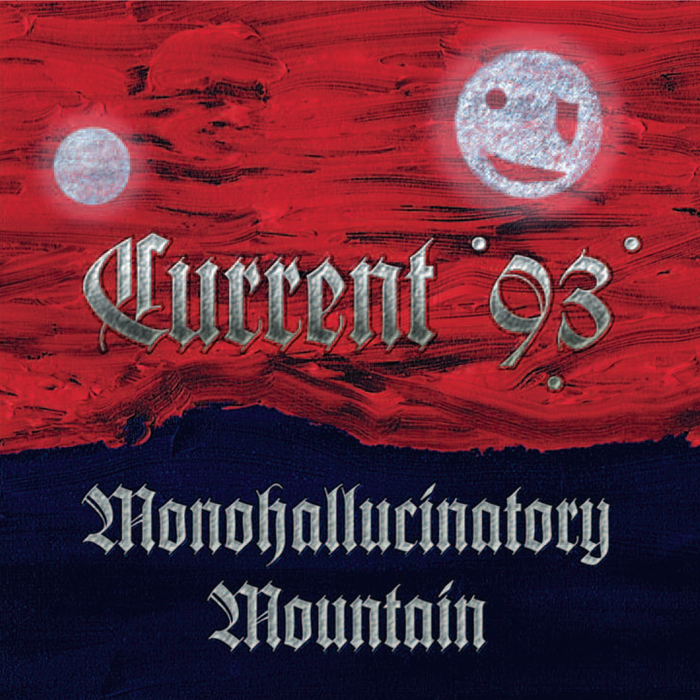 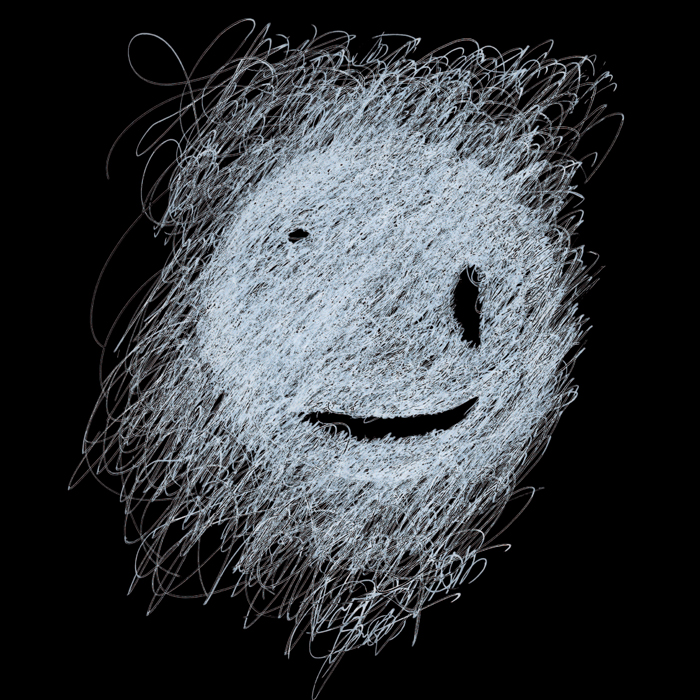 Also released in a Monophonic version as –

MONOHALLUCINATORY MOUNTAIN
(The monophonic version of ‘Aleph at Hallucinatory Mountain’)

Tyranny of Stars
Small of Destroyer
Oh Microwave, Oh Galaxy Kill
Six or 3 Suns
Rise of the Butterfly (We are not the Disco)
Murderer
Queen Morning (Kissing Rain, Killing Stars)

PITCHFORK
Four tracks into Aleph at Hallucinatory Mountain, David Tibet finally relaxes his draconian, dramatic voice: “My teeth are possessed by demons and devils/ And I was by myself but not myself,” he offers calmly through a patter of circular jazz drumming and a stout bass throb. For Tibet, who’s spent many of the last 30 years pushing against reductive self-definition in Current 93, these two lines might be as close to an artist’s statement as we’ll ever get. Tibet has long written from the troubled threshold between his mind and God, juxtaposing images of himself as a heretic and an acolyte while sorting through interpretations of Christianity, mysticism, the occult, and the inane. In Tibet’s gnostic vision, none of us– God included– is perfect or beyond reproach, so Current 93’s oeuvre serves as a tool for self-flagellation and self-assessment. On his 1992 masterpiece, Thunder Perfect Mind, Tibet suggested that, “In the dark, you must look in your heart.” With Aleph, Tibet– a devout Christian who reads the Bible in Greek and occasionally writes and sings in the ancient Coptic language– recognizes his troubles in another moment of solitary desolation. This time, he’s asking for help.
Behooving a sinner, Tibet’s rarely been alone for his most personal explorations: From Antony Hegarty and Ben Chasny to sound artist Hilmar Örn Hilmarsson and Nurse with Wound’s Steven Stapleton, he’s amassed a revolving army to provide sounds worthy of such intimate and existential conflicts. Aleph is a charging, rock’n’roll appraisal of Tibet’s central concern– living with respect to himself and to God– supported by one of the best casts yet. Stapleton, improvisational drummer Alex Neilson, Chavez’s Matt Sweeney, and harpist Baby Dee return, along with Andrew W.K., Rickie Lee Jones, guitarists James Blackshaw and Keith Wood, and the artistically ambitious porn star Sasha Grey. Carefully orchestrated beneath Tibet’s uncanny voice, they create not only Current 93’s most rock-oriented album to date but also a fine, fitting crown for Tibet’s prolific decade. A surprisingly tuneful, consistently compelling mix of industrial stomp and folk grace, Aleph offers both a career-spanning capitulation for newcomers and a bold push forward for zealots.
As with most of Current 93’s albums, specifically 2006’s sprawling, apocalyptic dream-state manifesto, Black Ships Ate the Sky, Aleph is a concept album of connected scenes and themes. At its center stands an exploration of the archetypes we often reduce into binaries– good and evil, dark and light, God and Satan. Aleph, the murderer, and Adam, Eden’s original innocent, personify the warring factions of Tibet’s mind. Instead of opposites, he makes them equals, where the existence of one implies the other: “Almost in the beginning was the murderer,” two children chant by way of introduction, Tibet reverting to his decades-old trope of letting the most innocent of babes reveal the most difficult of truths. Purity doesn’t last long, and anything less would be unbearable, the album posits. For instance, during its triumph, “Not Because the Fox Barks”, Aleph has given into goodness and is “creating starlings with brightness.” Bored and brooding, he hates it. Tibet understands: “This is Terminal Eden/ A killer of dreams/ Of hopes/ Of galaxies.” Aleph rages again against Adam.
Aleph’s music synthesizes many of Current 93’s directions over the last three decades into a potent, relatively lean 54 minutes. In the early 1980s, Tibet emerged from a stint in Psychic TV with a handful of audacious industrial albums, in particular 1984’s Dogs Blood Rising. Though certainly not formless, Rising bent barbaric howls and noise floods into long tracks that treated traditional song structure and quiet as anathema. In the late 80s, inspired by a nascent interest in English folk, Tibet shifted to vaguely song-oriented music written largely for acoustic instruments. Aside from various electronic pieces (see the excellent Faust and I Have a Special Plan for This World) and several heavy exceptions, Tibet’s long kept his intensity but foregone the early cacophony. But Aleph unites those extremes imaginatively, plating rather pretty arrangements with slabs of distortion. Serrated drones slowly overrun the 12-string Blackshaw array that opens “Poppyskins”, while blades of cello knife through the lumbering metal of “On Docetic Mountain”. Drummer Neilson bridges both aesthetics, pushing the songs forward but complicating with nuance. It’s arguably the most populist music Tibet’s ever made.
Unfortunately, no amount of explanation or influence can move many beyond the hurdles of Tibet’s chilling voice or his earnest quest for religious revelation. And, sure, Tibet can sound like the Devil himself, and any lyricist that’s as wont to reference Reese Witherspoon or Tupperware as he is to recite scripture or quote in Coptic is bound to frustrate the majority. Perhaps the rising stars of writers like the Hold Steady’s Craig Finn or Destroyer’s Dan Bejar– both wild-voiced poets who compose in hypertext, connecting ideas across multiple releases while incorporating rapacious literary minds– have expanded our collective interest in singers who sound like no one else and write with something bigger in mind than the next hook. If so, David Tibet’s got approximately 50 records waiting in his back catalog, with the latest– the excellent Aleph at Hallucinatory Mountain– suggesting he’s still a long way from the Omega. Grayson Currin, July 7, 2009

RECORD COLLECTOR
Along with Nurse With Wound, Current 93 have enchanted, infuriated and sonically entertained in equal measure, as mainman David Tibet weaves his preoccupations and obsessions into compelling cobwebs over music that oozes, trickles, grinds, sears and permeates like a thick but not unpleasant odour.
Three years after Black Ships Ate The Sky, Current 93 return with an album that’s the equal to that widescreen blockbuster. Opening track Invocation Of Almost features grinding guitars that support Tibet on his metaphysical pronouncements; Poppyskins melds acoustic guitar tingles with minimal percussion and harsh guitar mixed to a murmur that serves as a pillow for Tibet’s vocals. Urshadow is another meditative track that, because of its musical restraint, gives the melancholy lyrics a perfect frame. Better still is 26 April 2007, opening with a subtle guitar hook before the pliant bass line allows Tibet to unfurl his thoughts like a Lovecraftian narrator, complete with great references to the likes of “crowns with cats heads on them”. A wonderful track, it ends with a spooky dog howl no doubt warning of the approach of Cthulhu. After nearly 30 years at the coalface, Tibet still mines a very rich seam.