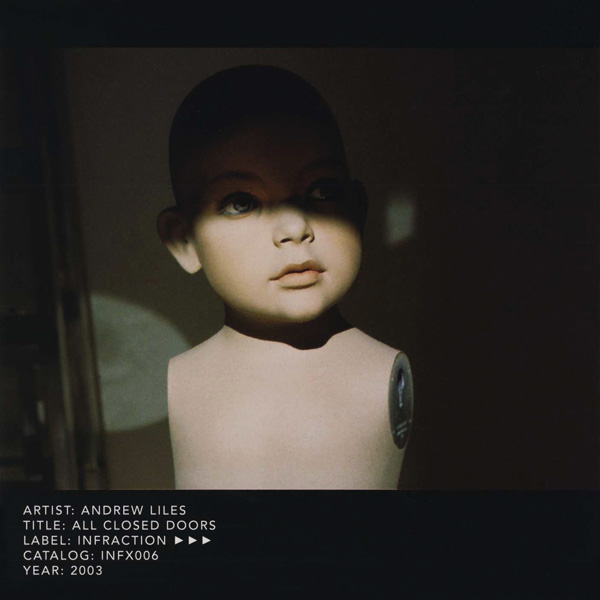 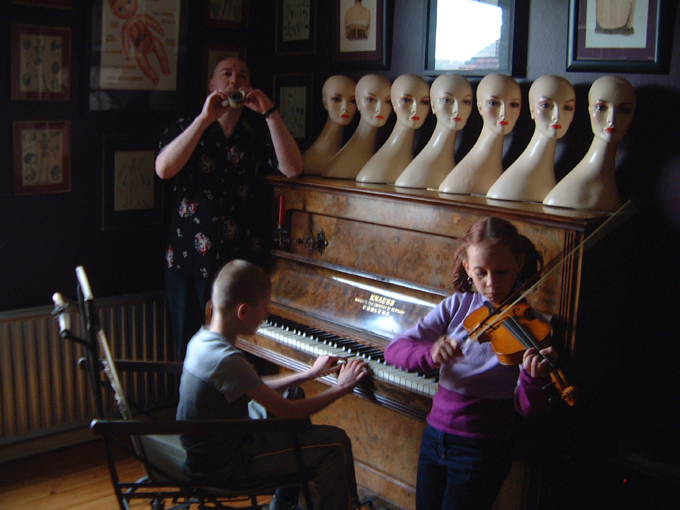 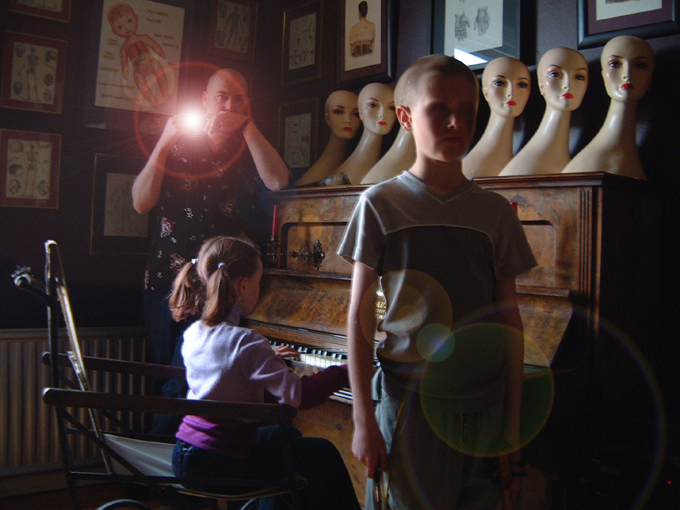 All Closed Doors was first issued in 2003 as a CD by Infraction records.

It was later issued as download version which contained the 2003 mix of the album, an enhanced 2011 mix and 3 bonus tracks.

Vital Weekly
In Vital Weekly 380 we discussed Andrew Liles’ second CD ‘Aural Anagram’, but that was a more recent CD than this ‘All Closed Doors’, which was delayed for reasons unknown. Liles is from the UK, from Brighton to be precise and has been around for a great number of years, but so far without much luck for getting his name around. Which is sad, because his music might appeal to some people with a love for dark, but surreal music, say the areas of Nurse With Wound. Liles operates on his own in a more electronic than good ol Nurse With Wound. Synths and sound effects play a big role in his music, but his input consists also of samples from voices, piano’s, orchestras or sounding objects. In a bed of ambient related drone musics, Liles paints his surreal landscapes, with children voices singing ‘que sera’ or the sound of doors opened (or closed). Less thematic than ‘Aural Anagram’ and therefore a little bit more scattered and fragmented and at times not entirely focused. Maybe I heard this material too often, seeing him a couple of times live. But in case you haven’t, this might be a very worthwhile CD to have, certainly if the dark alley is yours anyway. FdW

ear-rational.com
“The sound design on this album is perfect.The last song has the sound of walking and doors closing. It is fascinating. There is a lot more to it, though, than just doors. My favorite parts on this CD are the voices, what they say and how they are effected. A male voice asks why you let him down. A child speaks of their dreams. Mouse tittering electronics whirl around in structured patterns, a piano fades into the past. A violin loops into water. The wind howls to you in a Hafler manner. The music is best thought of in the terms of ‘experimental,’ but not in a noise sense. This could be a distant cousin to the energetic non-silly NWW albums. Any fan of different music should check this out, it really is perfection. – Don Poe

Brainwashed
The art of the sound collage and drone music has a group of key members. Mirror, Christoph Heemann, Andrew Chalk, William Basinski, and perhaps just a few more are known and loved and create music that invokes images from other worlds; be those images frightening, sublime, or esoteric, it is impossible to deny their visceral impact. Andrew Liles has been added to that list of elusive and wonderful musicians with this release. From the first moment All Closed Doors submerges me into a universe I’m unfamiliar with and perhaps slightly scared of. Furniture drifts through the air, children laugh and disappear down long hallways, shadows scream and laugh at each other when there is nothing to cast them, and the echo of something ancient pours down over me in the form of a vacant sky. The impact of Liles’ sound worlds on this disc is unavoidable, his imaginative and spectral cadences whisper and glide through the air in ways that effect the brain; scary stories are told without the aid of a voice, heaven spills over from the speakers into the room even though such a thing is unthinkable. There’s a strange light that bounces and reflects off of everything in this world; there are oceans of singing fish and mountains bellowing their hate onto the helpless below. I can’t stop coming up with images, it’s as if my mind is flooded with an invisible light that forces it into overdrive, into a creative process that can’t stop, that wouldn’t stop if the album didn’t end. Very rarely do I find an album so immediate and compelling as this; I often have butterflies while listening to it. It is perhaps the equivalent of a sexual release extended over fifty minutes of sound. None of the overtly sexual material from Liles’ Aural Anagram/Anal Aura Gram is here, but there’s that mysterious and ancient something looming over the whole of this release. It’s a tension that can’t be avoided, a physical tension created in the presence of an erotic and secretive resonance. – Lucas Schleicher http://www.brainwashed.com