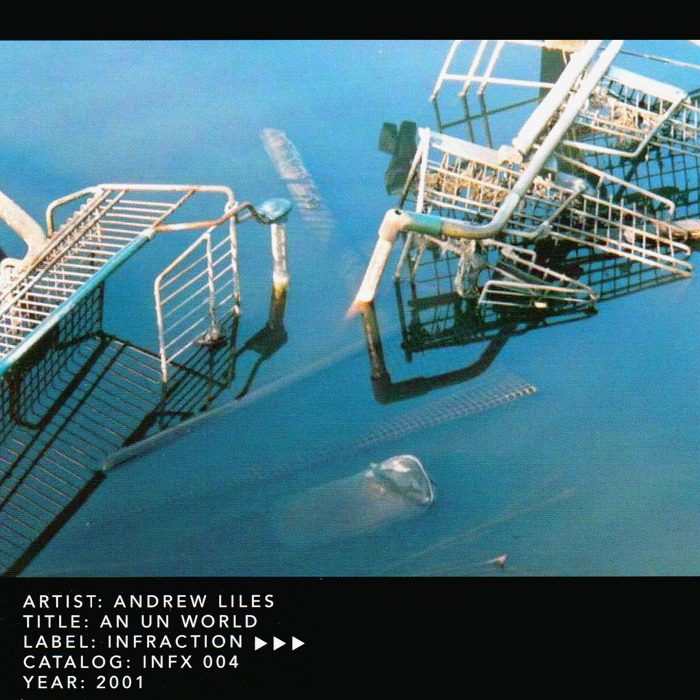 Anything, Everything, Nothing
Where?
No Ending - No Beginning
Untitled *
Over Before It Began
Nocturne
Untitled
Nothing At All
An Un World
No Future
Beneath Green Wave, Or In The Brown Mould
Untitled *
Left Behind
Won't Nowhere
Untitled
An Un World (Outro)

* Do Not Appear On The CD Version Of 'An Un World' 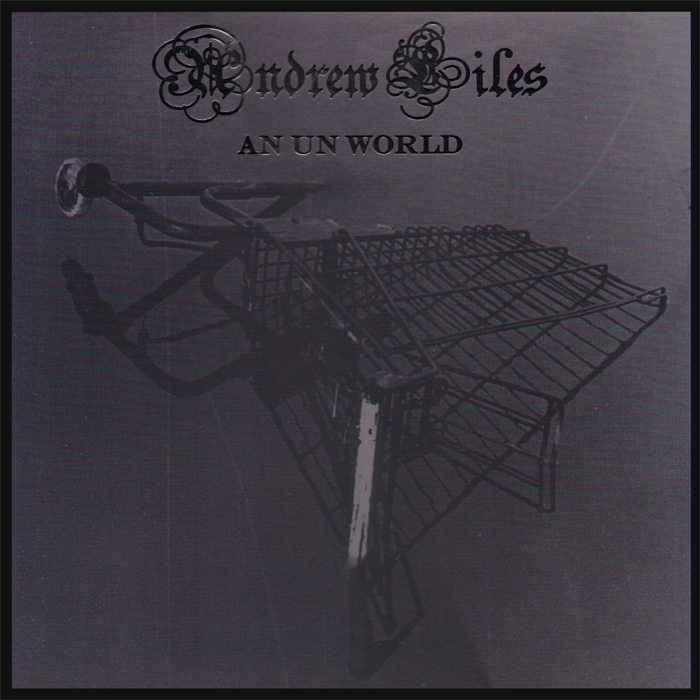 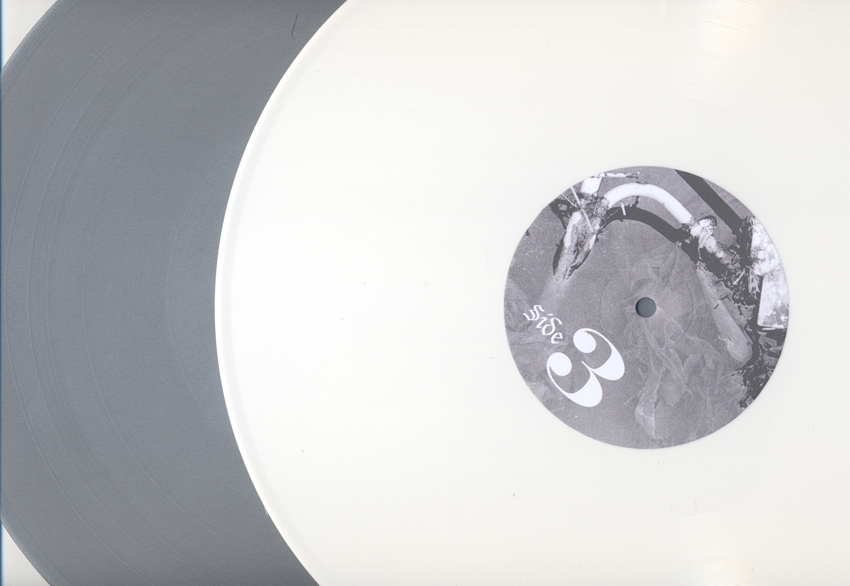 An Un World was originally released on CD by Infraction records in 2001 and in 2009 on deluxe double vinyl by Eroto Tox Decodings.

The vinyl edition (300 copies) is a double coloured vinyl (one disc silver, the other white) housed in a gatefold sleeve with silver foil embossed lettering.

Recorded in London, England from November 2000 to July 2001.
Mastered for vinyl by Thomas Dimuzio.
Photography on both formats was by Nathan Haynes, spelled incorrectly as Hayes on the CD release.

Side-Line
Released back in 2001, this album by soundscape constructivist Andrew Liles only reached us now. It’s the first recording of 4 by Liles. Coming up are 10 X 10″s on the UK label Macrophonies of “Love song”, followed by “All closed doors” on his US label Infraction and “Aural Anagram” on Macrophonies. On this first output Liles mixes both minimal strings with soundscapes that range from sampled rain (which reminds me of the cracking of a record) to voices down the hall. Extremely minimalistic sadness compiled into 14 tracks. Material that will please the instrumental Coil adepts and will leave the other ones numb. This is audio material for the trained ear only.

Unknown Origin
“…this ain’t no party, this ain’t no disco, this ain’t no foolin’ around…” Talking Heads, from Fear Of Music
This ain’t no fooling around, indeed! Infraction Records’ second disk is the debut of Andrew Liles, an Englishman who has brought back notice of another world to our ears, an un world. Thin and wispy, disturbing and dissonant, the music Liles has recorded sketches out a multitude of unearthly visions, all heavily processed, eerie and electronic but avoiding all clichés to date. This is original, surprising music and is not the least bit derivative, at least to my ears. The disk starts with a jarring intro that could easily come from the soundtrack of an ax murder with you as the surprised guest. Surprise! Then, the music skates between lush analog and harsh digital confetti to find a home on the borderland of smooth and fractured sounds. Two note loops provide the sole backdrop on several cuts while electronic voices and samples pop up elsewhere, including either harshly processed rain or frying, I can’t tell which. Voices speak and we feel their urgency but we can’t understand them. Noises, tones and voices come and go. The main operative word, my primary reaction, is summed up by the word “eerie” with enough “disturbing” added to the mix which keeps this well away from the term “new age”. No, this is mature, adult music so put the kiddies to bed. And this is not sleepy music, this demands attention on almost every other cut but rewards attention on all of them. This is the sort of disk you might not “like” right away but find yourself playing again and again. Liles has brewed some primordial stuff here that some will need badly in this mediocre age. I don’t recommend headphones on your first listen but I do recommend a listen. Liles has said a lot here with, I understand, more to come. Just be careful with that ax, Andrew.

Vital Weekly
Recording since the mid 80s, having released many CDRs, paid finally off in releasing a real CD in 2001. Andrew Liles works with environmental sounds, processed through sampling and computers. He does this in a very subtle way. Short samples of instruments are set against long environmental recordings, but it’s hard to define what these recordings are. It’s not really important. Liles plays his stuff at a most modest level, but it’s filled with rich textures, played with great detail. In general his music is more ambient then musique concrete, certainly towards the end of the CD when ringing tones take over. The electronics used are mostly sine waves, but they too act on a low level. Liles plays unearthly music, using very down to earth sounds. He takes his inspiration as much from The Hafler Trio then of any electronic minimalist, like Oliverios or Radigue. Maybe too ambient to be in the same group of people as Gunther or Meelkop, but certainly too experimental for any downright ambientheads.

All Music Guide
Andrew Liles offers little hope or joy on his meticulously crafted album An Un World. Over the course of 14 tracks comprised of various sound sources tweaked into dark ambient soundscapes, the producer carries you through an often fantastic, sometimes frightening world of sound, characterized by its tone more than its individual components. Every song features its own unique palette of sounds. For example, indecipherable voices murmur beneath a haunting wind-like buzz on “Over Before It Began,” and a locked-groove piano record loops infinitely beneath a hushed monsoon of rain-like static on the title track. Just as the album comes to a calm yet harrowing close, “Left Behind” lumbers on for over 13 minutes, carried along by ghostly ambient tones that waver slightly and seem somehow natural, in an otherworldly kind of way. It’s a truly disquieting epic that summarizes the tone of this album more than any other song here. The fact that it lumbers on and on only confirms its haunting quality and, in a way, brings An Un World to a fitting conclusion. Such wonderfully dreary music obviously isn’t intended for the masses, but taken for what it is, Liles’ work here continually startles you, both with its hushed subtlety and psychological effect. – Jason Birchmeier

Rective
Andrew Liles has been making his own particular brand of vertiginous, disturbing and disjointed music since the mid eighties. Already with a whole library of CDR releases to his name, Liles has emerged from the London experimental scene as both an inventive and forceful presence and a purveyor of some of the most surreally mournful and otherwordly music you are ever likely to hear.
His first non-CDR release, An Un World (Infraction 2001) opens with ‘Anything, Everything, Nothing’ immediately swallowing the listener in layers of hypnotic tones and electronic chattering; buried voices slowed to a crawl, unexpected crescendos hit like meteorites then fall away to nothingness. ‘Where?’ paints a bleak, alien soundscape of stretched chimes and drowning violin and is followed by the brittle crackling of an ancient gramophone and the lost strains of forgotten music in ‘No Ending – No Beginning’; all the while discontented murmurings and distant collisions bubble beneath. “This is your life, your pathetic life…” drawls the opening of ‘Over Before It Began’ an electronically shredded vocal stuttering as the waves of tones and stolen snippets of music flutter effortlessly in and out of the mix. This record is the sound of the cavernous emptiness which exists, tardis-like, inside us all, the immeasurable gap between hope and failure; a magnificent symphony of sadness and stifled dreams. ‘Nocturne’ is a dark and rainy night in purgatory, while the first of two untitled pieces on the album strikes out against the soporific drones with sparks and pulses of malfunction.
The title track consists chiefly of the sound of a stuck record, a strangely touching looped piano refrain going nowhere, ad infinitum… A kind of serenity of loneliness is reached with ‘Left Behind’ as the lamenting tones drift across one another, intermittently coalescing into beautiful waves of sound. ‘Won’t Nowhere’ is a single, unsettling loop sampled from WW2 standard ‘We’ll Meet Again’; the album comes to an end with a reprise of the title track ‘An Unworld (outro)’. A definite stand-out among much of the soundalike dross of the electronic ambient and avant garde world, An Un World is a more than promising first release from an accomplished and affecting sound artiste.