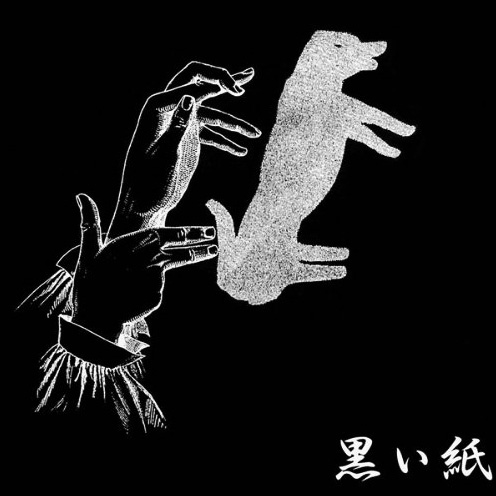 Forming part one of ‘The Vortex Vault’.

Vital Weekly
…The Vortex Vault series, a series of no less than 12 CD’s of both archive and new recordings plus the odd collaboration thrown in. On Black Paper he collaborates with Japanese artist Kenji Siratori, who contributes spoken word and whisperings, delivered in an urgent and dynamic fashion. As my Japanese is poor, I have no idea what he’s talking about, making the voice sound more like an additional instrument, which perfectly suits Liles’ collage-like style of music. Black Paper is a great CD (though at 30 minutes a bit brief), which made me want to listen to the second Liles CD in this series even more.

RE:GEN Magazine
Andrew Liles’ new series of CDs, The Vortex Vault, is as ambitious and eclectic as the composer himself, including everything from archival releases to new collaborations spread out over 12 CDs. The first part is a collaboration with Kenji Siratori, the prolific and avant-garde author who’s recently risen to prominence in the industrial scene by working with everyone from Portion Control to Nordvargr. On Black Paper, the first impression you get from Siratori is one of intensity; whether or not you understand Japanese, his growled speech on opening track “Barometer II” sounds angry and threatening. “VTR” is less emotional but no less unsettling; like Siratori’s writing, it’s cold and mechanical, with Liles’ sampled mechanical sounds making things even more jarring. “Jaguar,” on the other hand, is almost tranquil in places, with Liles building soft atmospheres by looping and layering Siratori’s monologues and smoothing them over with judicious sustain effects. Perhaps the most intriguing piece, though, is the title track. A bit like Einstürzende Neubauten’s quieter “floor pieces,” it builds a gentle rhythm from clattering metal, with melodic accents provided by what sounds like a xylophone. Though its sound sources—including Siratori’s muttered monologue, which pans back and forth across the stereo channels—its use of at least some structure makes the arrangements all the more uncanny. Between Liles’ own sonic eccentricities and the fact that few English-speaking listeners speak Japanese, Black Paper is by definition of interest only to a select few, but for fans of the avant-garde it appears that The Vortex Vault is off to a good start.
Posted: Wednesday, July 25, 2007
By: Matthew Johnson

Smooth Sailing
Andrew Liles, from the UK, is an experimental sound artist with a pretty diverse output. I’m only familiar with a few of his releases, but they ranged from sound art, to ambient soundscapes, drone, experimental electronics and the occasional foray into noisier directions. Some good points of reference, as far as his ambient and drone works are concerned, would be andrew chalk and vidna obmana, two artists he’s also happened to work with.
Kenji Siratori is a Japanese cyberpunk author who’s had a hell of an outpouring of non-paper releases last year. This is mostly because he pimped himself out by “writing to as many industrial, ambient, ebm and goth bands he could find, including “reviews” of them in his idiosyncratic style, and asking to collaborate. (this) scattergun approach proved successful, despite his reviews of non-sequitirs and non-sensical cyberspeak being interchangeable” [discogs.com]. After all was said and done he’d put out fifteen total albums, including three that are on net labels and are availiable to download for free at smell the stench and dystonia. The bulk of them have been in the form of collaborations, most notably with gx jupitter-larsen (the haters), torturing nurse and henrik nordvargr björk (hh9, folkstorm, mz.412, et al.). I would be surprised if that last one is anything short of amazing. I…must…stop…buying…things…
Black paper opens up with barometer ii, a beautifully haunting piano piece by liles, which siratori soon begins speaking over. His words are all spoken in japanese. Emphasis on spoken. This could be poetry or god knows what, but it sounds great. He’s got this gruff sounding voice that immediately made me think of splinter’s voice from the teenage mutant ninja turtles movies. I love it. There’s some great layering of his vocals near the end, too.
Vtr is one of the least musical (most experimental) cuts on here. There’s a whole mess of noises, electronic bleeps and textures from andrew, and kenji’s vocals are affected, in parts, and panned all over. It easily has the most overall stuff going on at once, but it works well, due partly to how andrew progresses it. If that was the album’s exercise in maximalism (i think i just made that word up), the title piece is its most rhythmic. Half of this piece features with some very catchy xylophone (i’m guessing) playing, the rest focuses on kenji’s vocals, manipulated the most here. One of my favorite parts is where its just him with no music, and there’s also his sped up vocals shooting back and forth between the speakers.
Jaguar is black paper’s absolute highlight. Over liles’ sparse backdrop there’s a vocal track in the left speaker, a different one in the right, a repetitious one in the center and then another, different track in the center. It’s completely hypnotic, wonderful and memorable. Then when that piano comes in towards the end, jaguar achieves total brilliance. It all strikes me as being rather noir, while maintaining an underlying sense of beauty. The next two tracks mainly feature andrew doing some nice, slightly stark, experimental electronic work. The closer, barometer iii is vocal less and revises the pianos from barometer ii, but adds some terrific electronic noises over it.
There’s actually two separate collaborations by kenji siratori with the title black paper, the other is with tardive dyskinesia. That may cause a bit of confusion, but this one is only available from andrew liles’ website or beta-lactam ring. It’s part of andrew’s 12 cd set, the vortex vault, limited to only 300 copies. Once those 300 are gone, that’s it. No reissues. I think if you get one from andrew it will be signed by him.
I’d also recommend his collaboration with gx. While it’s not as memorable as this one here, there’s some mighty fine noise by him, and who doesn’t like mighty fine noise? After hearing all of this from kenji i’ve definitely become interested in his literary work…at the very least it should be interesting.