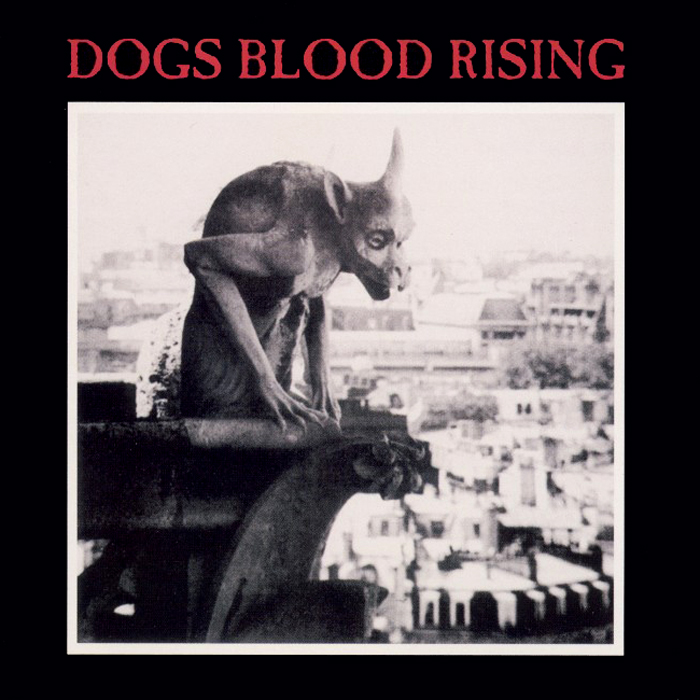 CD released with first 1000 copies of the remastered original recording.

Released concurrently with the reissue of Nature Unveiled is Dogs Blood Rising another Current 93 release from 1984. Once again this reissue reverts to the original track list with the first 1000 copies coming with a remix CD by Andrew Liles. Dogs Blood Rising is by far a more abrasive recording than Nature Unveiled, making greater use of huge swathes of frequencies and drones. Many people have found it to be a powerful release but it’s one that I’ve never been completely convinced with. Some of the tracks appear to be carried over from Nature Unveiled but less thought out. Words are quite often just reduced to one or two phrases, and Steven Stapleton’s effects are less effective and much more visceral. Perhaps the use of harsh electronics is down to the involvement of John Murphy, his rhythmic efforts certainly form the basis of ‘From Broken Cross, Locusts’.
‘Christus Christus (The Shells Have Cracked)’ is awash with manipulated chanting shadowed by shrill electronic undertones. ‘From Broken Cross, Locusts’ simply comprises looped ceremonial voice, with percussive flourishes and crashing cymbals, and Tibet’s heavily distorted voice growling “anti-Christ” throughout”. ‘Raio No Terrasu (Jesus Wept)’, likewise, is stripped to constant reiterations of “Christus, Christus..”, and “anti-Christ, anti-Christ..” above a series of shrill and piercing effects, looped sound sources, before being sucked into elongated droning. Tibets’ vocals are given similar treatment to Nature Unveiled.
Dogs Blood Rising is best represented by ‘Falling Back In Fields Of Rape’ and ‘St Peter’s Keys All Bloody’, two diverse tracks that contained formative traces of motifs that Current 93 would rely heavily on through subsequent releases. ‘Falling Back In Fields Of Rape’ appeared to be a comment on the banality of evil and man’s capacity for violence: a modern apocalypse. It featured variations on the now famous lyrics “In A Foreign Land, In A Foreign Time, Reaping Time Had Come”. The track opened with chants that would be quickly enveloped by a hammering drum beat, backward processing spliced with the recurring cry of “War”. With the hurried diatribe bellowed by Steve Ignorant of CRASS – “It could not happen here” – it took on an accusatory and defiant tone, mixed with the extended lyrics that would later be edited by Douglas P. to better effect on ‘Behind The Rose (Fields of Rape)’ by Death In June. Percussion threshes manically and cuts to a child’s recital of the nursery rhyme ‘Mulberry Bush’, and then amidst spinning backwards processing a child, Ruby Wallis, intones the recurring lyrics: “In A Foreign Land, In A Foreign Time, Reaping Time Had Come…’, a distant voice gruffly recites the lyrics over a hovering drone. It cuts again to Diana Rogerson delivering a litany of atrocities, before a singing melodically over incongrous drum machine. At last Tibet takes his turn intoning the lyrics in his refined, nasally tones. Here though the words take on a religious dimension as if Tibet is conversing directly with Christ. It is a tremendously powerful track, carefully constructed and a fine example of Current 93’s nightmare sounds.
Much simpler but no less effective is ‘St Peter’s Keys All Bloody’, a sinister reading of Simon and Garfunkel’s ‘The Sound of Silence’ whispered by Tibet, juxtaposed against a male recitation of the ballad “Scarborough Fair”. Layered behind is the voice of Tibet delivering curt statements on the impermanence of life.
Although Dogs Blood Rising shares an affinity with Nature Unveiled it is a far darker, more crepuscular release and indeed possesses an aura of malevolence. It is quite a unique release amongst their work but it does however signal the introduction of children’s voices, nursery rhymes and old English folk music touchstones for later Current 93 material.
The first 1000 copies include Dogs Blood Ascending, a remixed version of the original by Andrew Liles. Liles has done a fantastic job here – remixing and reinterpreting the elements to attain a clarity and coherence absent from the original recordings. The key passages of ‘Falling Back In Fields Of Rape’ are reassembled to stunning effect, and threaded with constant droning it becomes far more cohesive than the disjointed collage of the original. Fresh tones and textures are added to the heightened percussive interplay of ‘From Broken Cross, Locusts’, and with some frantic edit cuts it becomes much more focussed and forceful. ‘Raio No Terrasu (Jesus Wept)’ is completely overhauled and rendered in subdued ominous drones with Tibet’s overlong “Christus, Christus…” words left lurking in the shadows. ‘St Peter’s Keys All Bloody’ is reduced to a toy-box melody accompanied by the recitation of ‘The Sound of Silence’ by Tibet, while the old English ballad is caught in a morass of voices. On Dogs Blood Ascending Liles has maintained the atmosphere but altered the focus significantly to create a version that is more refined and approachable but nonetheless remaining a foreboding piece of work. Dogs Blood Rising has never been a necessary purchase but with the addition of Andrew Liles beautiful remix this is well worth seeking out.