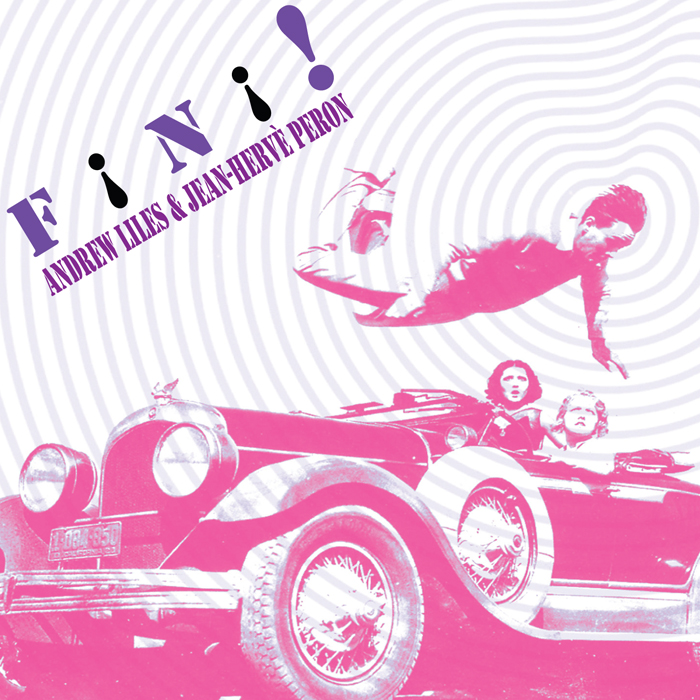 The Drummer is on Valium
I Do Not Like to get Wet
Shut Up and Sit Down
Cuculiformes
We Are Ready Here
Sans Paroles
The Fly on the Windowsill is Dead
Shake your Hooves
Nosferatu
I Lost Faith in Words
Congo Bongo La La La
?
It's Too Loud
Fini! 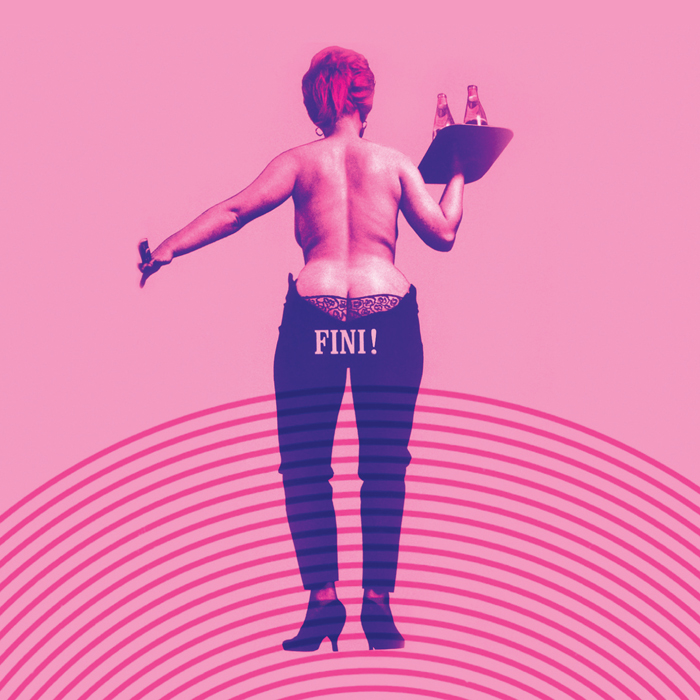 My Ears, My Ears!
A collaboration between Jean-Hervè Peron of Faust and Andrew Liles of Nurse With Wound.
Andrew Liles seems to be flavour of the month at the moment. Popping up here there and everywhere. From remixing classic Current 93 albums, to performing with Nurse With Wound to this most unlikely of collaborations. If you’d have asked me who I thought Andrew Liles was likely to be working with next, Jean-Hervè Peron would never have been someone I would have thought of. I always associate Andrew Liles with a very electronic/ experimental sound much more built up from samples and keyboards and then processed rather than the more traditional sounds of guitars, drums and vocals that we get here. That said this does work pretty well and they have created a very entertaining album.
The album starts with its longest piece “The Drummer is on Valium.” I love this track. Basically consisting of JHP saying “The Drummer is on Valium,” backed by a tribal sounding drum pattern sounding not too dissimilar to Faust or maybe Nurse With Wound’s “Swamp Rat.” After a couple of minutes a guitar comes in with a sound very much like that from Faust’s “Baby” from 71 Minutes of Faust. The eight minutes this runs for fly by and I’d be more than happy to have an extended version to listen to.
Next up is “I Do Not Like To Get Wet,” a cheerful little piece played on what sounds like a couple of different brass instruments with the odd other sound thrown in for good measure. No vocals on this one and it has a sort of oompah pah feel to it.
“Shut Up and Sit Down,” follows, a pleasant acoustic guitar track as the back ground with some little “additional “ sounds that have Andrew Liles written all over them. Vocally we get JHP basically saying the title in French with slight variations here and there. All reminds me of Daevid Allens early 70’s solo albums. It’s piece that wouldn’t be out of place on Faust IV.
“Cuculiformes” is a short gentle guitar piece that follows on nicely from “Shut Up…” it’s a nice interlude before the heavier sounding “We Are Ready Here,” starts. This begins with a deep resonant synth line that suddenly is blasted away by a powerful synth solo line and trebly distorted guitar. All very manic and underpinned by the original synth line that’s hiding nicely in the background waiting until it get s a bit of quiet to get itself noticed again. This is very much a Faust track to me. Andrew Liles isn’t particularly noticeable or at least is contributing in a style I wouldn’t expect of him.
“Sans Paroles,” is another one of those gentle guitar tracks that wouldn’t be out of place on Faust IV.
Then we have “The Fly on the Windowsill is Dead.” There’s definitely a big Nurse With Wound influence going on here, or at least a Steven Stapleton one. This reminds me very much of Current 93’s In Menstrual Night album. An eerie sounding track with lots of creaking, groaning and low pitched hums only given slight respite in the middle with a montage of vocals by JHP and some brief speech samples. I would have to suggest this track is too short and it would really benefit from being given longer to develop more and to be allowed to really suck you in. It’s a good piece but I could definitely have done with more of it.
“Shake Your Hooves,” is another piece that is more Faust than anything else. It’s a huge groove of bass, drums and guitar sounding like it could have been the noisier more extrovert brother of Faust’s ”Listen To the Fish”, or “Hurricane.”
“Nosferatu” is another pleasant guitar interlude with some whistling and singing from JHP to accompany it. A calming track to take you down from the intensity of the previous two.
Next is “I Lost Faith In Words.” It’s a jazzier affair. The sort of backing you might get to a Kerouac spoken word album. Instead of Kerouac we have JHP narrating in both English and French. Not a bad track but probably my least favourite on the album.
Then we’re back to the NWW humour “Congo Bongo La La La.” Starts with some ambient drones backed with some gentle bongos only to suddenly turn itself on its head with a burst of humourous vocals very much in an early Nurse With Wound style.
Another guitar interlude arrives as “?” the shortest piece on the album but perhaps just there as a break before “It’s Too Loud.” One of the strongest pieces of the album this starts with what sounds like some string synth sounds and the occasional guitar note and JHP discussing the sound levels with Andrew Liles. It’s mutates into JHP speaking German and then slowly builds. The intensity of the sounds increases with a guitar riff some snare drum and JHPs vocals and becomes a lovely piece of prime Krautrock.
The whole album finishes, appropriately enough, with “Fini.” A short one minute track with a small thud and some crackles as a background to JHP talking and then it all ends with the word “fini” repeated a few times.
I was really unsure of what to expect from such an unlikely collaboration but I found it to be a really enjoyable album and one that I’ve returned to plenty of times in the last week and can see myself continuing to do so for some time to come.

Brainwahsed
Faust’s Jean-Herve Peron joins Andrew Liles for an album full of childlike joy. From the electric colours of the sleeve to the electric performances on the disc, this is a wonderful way to spend three quarters of an hour. Both artists sound like they are having fun and the cheer definitely filters through.
This is a fitting sister album to the Faust and Nurse With Wound collaboration Disconnected. There is a more playful vibe to Fini!, from Peron’s lyrics (although some of it sounds like idle studio talk removed from its original context; “Is this Kate Bush?”) to Liles’ disorientating arrangements. Taken together, the 14 tracks that make up this album are as varied as anything dotted throughout the Faust or Andrew Liles back catalogues but all the songs sound like they belong together. There is the kraut stomp of “The Drummer is on Valium” and the philosophical “I Have Lost Faith in Words;” both similar in spirit but very different in execution.
The majority of the pieces here are on the shorter side of things, ranging from 40 seconds to a couple of minutes in most cases. Sometimes I feel like they have been stopped far too early, ideas that could go further are stopped short but it never feels like I have been short-changed. Tracks like “Congo Bongo La La La” might well deserve to be longer but they still pack the punch that you want and realistically, there is only so many long songs an artist can do in their careers before they need to shake things up a bit (and both Liles and Peron are no stranger to long songs).
Not that it is all little snippets of sound, there are some meatier pieces on the CD. The twisted Middle Eastern music by way of Wümme in “Shake Your Hooves” is very satisfying. For five glorious minutes, a fuzzed out bass guitar propels the track along like a runaway horse. It is the perfect length, not outstaying its welcome but sticking around long enough to sink your teeth into. However, things get even better with “It’s Too Loud” as Peron appears in both stereo channels in various languages while a Velvet Underground style guitar rhythm builds up in the background. If VU kicked Lou Reed out of the band and hired Peron in his stead then “Sister Ray” would probably have started like this.
Considering Liles has played live as part of Faust and there is at least one planned performance of Fini! later this year, I dearly hope he continues to work with Peron either in or out of Faust. This album is full of superb moments and it would be a shame if this was to be the only release by the duo.

Weirdomusic.Com
When mayhem artists like Nurse With Wound’s Andrew Liles and Faust’s Jean-Hervé Peron conspire, the result might be described as acousmaniac. Fini! is an arsenal of fun that comes on like a vibra-gun blast to the pineal gland. The glorious studio tomfuckery of “The Drummer is on Valium,” Fini!’s opening cut, let’s us know in no uncertain terms that Krautrock hasn’t stopped mutating after all these decades, nor has it been successfully recycled by the archons of mainstream airwaves. That’s one thing that makes Fini! delightful. It comes on like an artifact from an alien culture excavated by reanimated Dadaists from five feet of moon-dust. Touch not the obelisk lest centuries of Germanic gnosis light up your central nervous system like Meister Eckhart’s pinball machine. This wanton little orgone-grinder is enhanced with blasts of blago-bung plus multi-lingual spoken word. “Congo Bongo La La La,” coming in shy of two minutes, stands out with brilliant eccentricity, teasing us with a slow build up of La La La before the Congo Bongo briefly shakes the bachelor tree house until it disgorges all the monkeys. While most cuts are incredibly brief, leaving the listener a little hungry for more, much more, and seeming to be the disc’s connective tissue, “Shake Your Hooves” rises up like a delirious five-minute ethno-pagan evocation of Pan.
A sweet release like this demands its own context, maybe a dainty tea-party of genteel aristocrats at which you, stripped naked with cabalistic signs emblazoned on your shaved body, spin Fini! at maximum ear-bleeding intensity before setting fire to the curtains and riding off on a white ass. You can claim that you did this at the behest of “It’s Too Loud,” which sounds like it was recorded on a Messerschmitt. If this impromptu circus doesn’t result in the New Aeon of Amon Düül IV, all is lost. Out of this world! – Steve Aydt

Wonderful Wooden Reasons
It doesn’t take a genius to infer from the name of this zine that it’s writer is something of a Faust fan (it’s a line from the track Meadow Meal on the first Faust album). I’m besotted by the music these fellas make (in whatever incarnation) and Fini! is no exception.
Very much in the Faustian spirit this is a tangled morass of sounds and ideas that works really rather well. We even get to hear (on track 9) the side of Peron that is rarely seen these days, that of the acoustic troubadour as he slowly weaves his guitar and voice (and whistle) around a happy little ballad. Occasionally the album drifts into fully abstracted experimental territories but this is really to be expected of both participants and their wonderfully obtuse sensibilities but at all points you feel that they are working to a cohesive vision that they never once loose sight of. If only everything in life was this good.