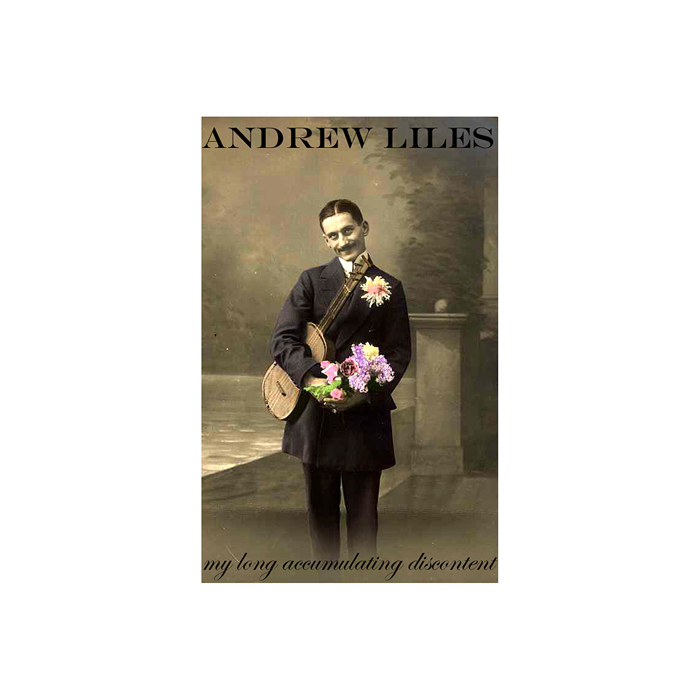 Is there anybody there?
Skobniki
The Ether Reel
Dream of the One Legged Woman (Version)
Dissolved (Te Whare Ao Aitu)
Dormiveglia
The New Motor or The Wonderful Infant
The Children’s Infirmary
A Cold Spring in Summerland
My Long Accumulating Discontent
An Unkempt Garden or the Cod Cape
Last Orders
The Captain’s Apprentice
Shadow Song
The Mind as an Engine that Hitherto
Ceases to Function Correctly
The Sour Accompaniment
By Sewers’ Side

Brainwashed
The most important and pleasing aspect of Andrew Liles’ latest full-length is that it doesn’t depend on any one formula, nor does it ever venture into the realm of total and complete chaotic madness. At times the music is wonderfully melodic, featuring ballroom-like music circa 1930s or 1940s and, at other times, it is an admixture blossoming with strange digital reverberations and analogue distortion. Most notably, however, My Long Accumulating Discontent features intelligible vocal parts and nearly unedited instrumental passages. His music is ever-expanding and finding new modes of existence. There is no sense here in talking about drones or noise. Though the music can be a collage of random samples and instruments at times, this record also features a queer and convincing logic that stems from its almost antique sound. Tracks like “Dissolved (Te Whare Ao Aitu)” and “The Sour Accompaniment” make a direct appeal to antiquity and play on the notion that these songs are all part of some morbid dream set far in the past; almost like Tim Burton’s vision of America at the turn of the century. On the other hand, there are soft and fluid pieces such as “The Children’s Infirmary or Precious and Sugar Foot” and “A Cold Spring in Summerland” that play off less familiar sounds and structures. While sounding distinct and perhaps more inviting than their musical neighbors, they ooze an aroma woven out of dust, old age, and memories better forgotten. I have an inkling of an idea that there is some form of a band environment behind these seventeen tracks—saxophones, nervous cymbals, melodic vocal parts, and narrative elements all play a part in various places—and there is, periodically, a very direct and uplifting song structure that stands out among the other pieces without being a show-stealer. I doubt Liles is forming a familiar band whatsoever, but the music that’s ushered forth from his mind and those of the musicians used on this album is undoubtedly more structured and mesmerizing than anything else I’ve heard from him. Despite this, he’s also managed to maintain the haunting, demonic, and perverse demeanor that makes his music so unique and alluring. It’s the addition of new sounds and structures to his music plus his ability to manipulate those structures that make this record stand out so sharply in my collection. Songs like “An Unkempt Garden or the Cod Cape” and “The Captain’s Apprentice” are the most emotionally stunning songs I’ve heard come from Liles and it is in their shape and movements that they become so remarkable. It’s a shame that I missed this record in 2004, it deserves a great deal of attention as it is one of the most exciting records I’ve heard from the realm of all music subconscious and spectral. – Lucas Schleicher

Vital Weekly
For long time readers of Vital Weekly the name of Andrew Liles should be a familiar one. In the past he has released his works on his own label, but also on Infraction Records from the USA and now a new album on the Czech label Nextera. As on his recent CD’s ‘Aural Anagram’ and ‘All Closed Doors’, Andrew Liles has by now a refined personal style.Processing sounds through his equipment (mainly a synth and loads of sound effects), adding ‘field’ recordings, which in Liles’ case is mostly voices of children but also an almost neo-folk singer in ‘The Captain’s Apprentice’, thus creating a highly surreal soundscape. As noted before the influence of Nurse With Wound is never far away here in Liles’ work, but I must also note that Liles develops his style more and more and it’s in these special, small refinements that he builts quite a strong CD. Maybe the strongest so far. Some of his previous works were maybe a bit too uniform, dwelling too much on one idea, but here he takes his various ideas – ambient, musique concrete, electronic and surreal hörspiel – into account, and uses for each of the seventeen tracks elements from these ideas. Although I am not sure what the underpinning theme is here, I believe (so I am told) that it has to do with the current state of England – the violence, the pub closing early so everybody drinks too much – and that is was never any different. Liles uses old english songs to make his point clear. Maybe for the non-native english man this is all hard to understand, and it is a damm fine album. (FdW)

Side-Line
Liles is an artist who’s already exploring the wide fields of experimental music for quite a long time. He released an impressive list of CDRs, vinyls and CDs. He now comes back with this amazing new production released on the Czech Nextera label. AL built up a strange universe where his taste of experimentation has been placed in an ambient progression of mysterious moods. The violin takes an important part in this production, but has been often used in a very experimental way. The different sound effects and noises seem to be more important than the usual sound and play of the violin. It all sounds like strange and sometimes frightening signals coming from an imaginary world. A few pieces contain some childish vocal parts, adding a funny aspect to the work of Liles. This is an unusual album with a real fascinating content! (DP:6/7) DP.