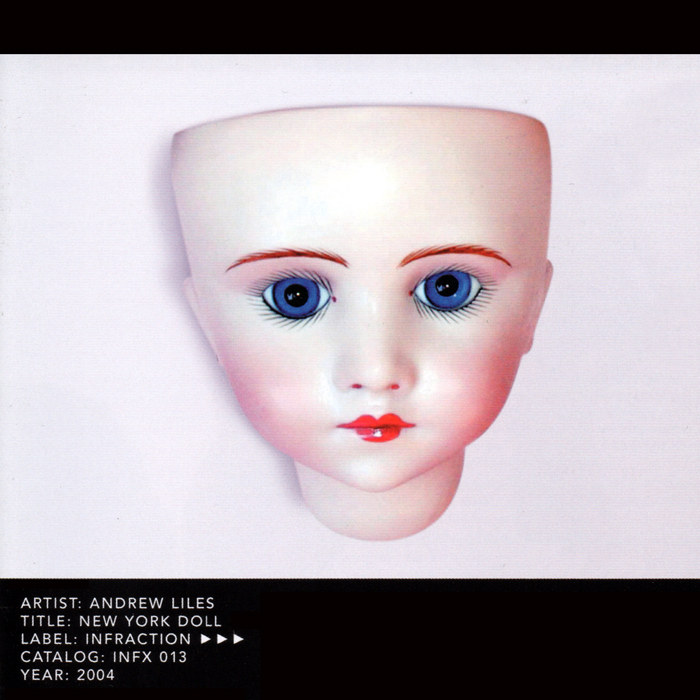 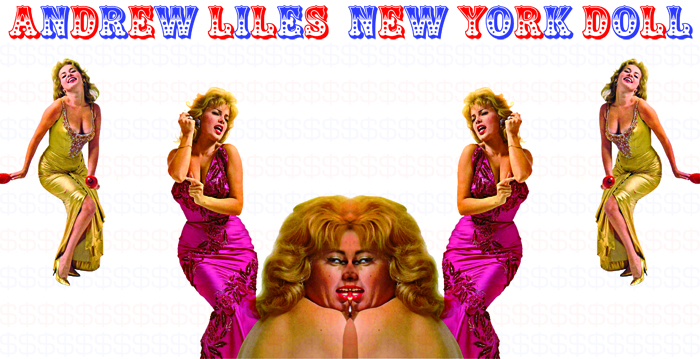 VITAL WEEKLY
Andrew Liles may be regarded as Infraction Records’ stable artist, since ‘New York Doll’ is already his third release on the label. This new release is entirely based on concert recordings by Liles in the USA, UK, Sweden, France and the Czech Republic. These recordings are now chopped up and re-assembled at home. As I had the pleasure to see at least ten of his concerts in the USA, I know that Liles doesn’t play the same tune every night, but rather has a few guidelines, a few sounds, that he mixes around when playing live. Sometimes the emphasis is more the synthesizer/ambient part, sometimes the taped sounds (people talking, girls singing, a telephone conversation) play the leading part. Still there is a great sense of inspiration from the likes of Nurse With Wound, but Liles nevertheless has a strong identity of his own. His collage work is set against a hybryd of drone related music, that can suddenly change mood and texture. It works quite intense at times. This double CD shows that Liles is also producer of great concert sounds. (FdW)

EAR RATIONAL
I have become quite a Liles fan in the past year, much to my happiness. Droney tones pulled long, like salt-water taffy, he doesn’t take his music too seriously, this is obviously fun for him to create. And it is fun to listen to! Think Soliliqy for Lilith with about 1000 more things going on to keep it interesting, yet still as subtle and sublime as the Nurse With Wound album. Blended into the drones are interesting effects, like in the track on disc 1, Foreigner(but wait, there are 3 songs called Foreigner here!), you can hear scissors slicing back and forth, stereo-wise. Lots of mangled voices here, slowed down a little, other times sounding like they are coming out of a little velvet box in the corner. Other voices are in other languages, but my favorite part is when a women’s voice just starts going off “Blah blah blah bla blah.” This 2 disc set has a porcelain doll on the cover and 50’s stylings women on the interior. What New York Doll means, I don’t know. A wonderful listen. I am happy to have this one!

BRAINWASHED
The liner notes read, “This recording is numerologically accurate and anagrammatically active.” It’s a journey from the recesses of the human mind to the world of words and sounds; Andrew Liles has resurrected his love for the anagram and created two discs of inverted uneasiness practically bathing in the dread and fear of every human psyche. If a model were to look into the mirror and see past all the make-up and fake admiration, he or she might see their face arranged into something dreadful, like the sounds Liles swoops up and twists into shimmering strands of crawling self-doubt. Beginning with a “Journey” and ending it in the same (but massively rethought) place, Liles deconstructs an already geographic puzzle of locations and ideas in order to reveal the parodies inherent within communication, thoughts, and recordings. Voices pan, distort, and stretch to their limits, connecting the seemingly empty space between aural recognition and the dead maze of concentrated mass that floats through the soul of the drone. New York Doll has been around for awhile, now, and as much as I love Liles’ work, I’ve been absolutely afraid of this piece. All the loose ends and contradictory paths lurching beneath the electric activity of the mind are pieced and sewn together on this record. The entire album reeks of a discomfort that places my head in a discrete and incredibly uncomfortable position, much like viewing the whole of an enigma, which simultaneously does and does not make sense. I’ve found myself listening to this record more out of curiosity than out of enjoyment and, with but the second disc excluded, much of what Liles has done on this full-length feels more like a puzzle than a record. The notes on the sleeve, the titles of the songs, the hauntingly robotic words, and the general ghastliness all add up to a kind of riddle, beseeching me to move around inside of the album and find its bones, discover its DNA, and finally unravel it in a self-destructive fit. The album pans between consistent tones, clicks, static, and eerie atmospheres composed of pianos, telephones, and urban pandemonium. Never confident than any one approach will exact the necessity of his paranoia, Liles fills this album up with all the conspiracy and awkward connection of the most damning philosophical theories. After finishing the record it is impossible to deny that everything is connected by necessity, a limb of some central organism throbbing and decaying, pulsing through every heartbeat and uttered word in human and animal history. There is something waiting in the spaces between this album and its the most unnerving portrait of the soul he’s yet to conceive. Even as recognizable voices fill the stereo spectrum on the second disc, Liles is laughing at the opinion that it must be terrestrial, of this world, and not some product of the mind extracting itself from nothing. – Lucas Schleicher