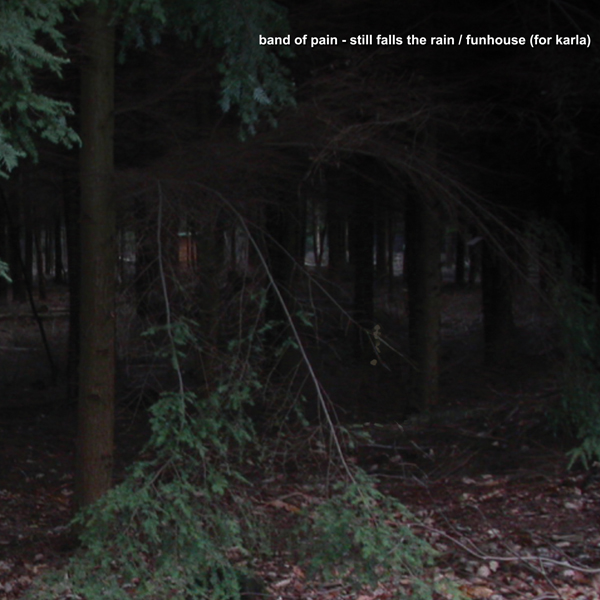 SIDE ONE
Still Falls the Rain

SIDE TWO
Funhouse (For Karla) 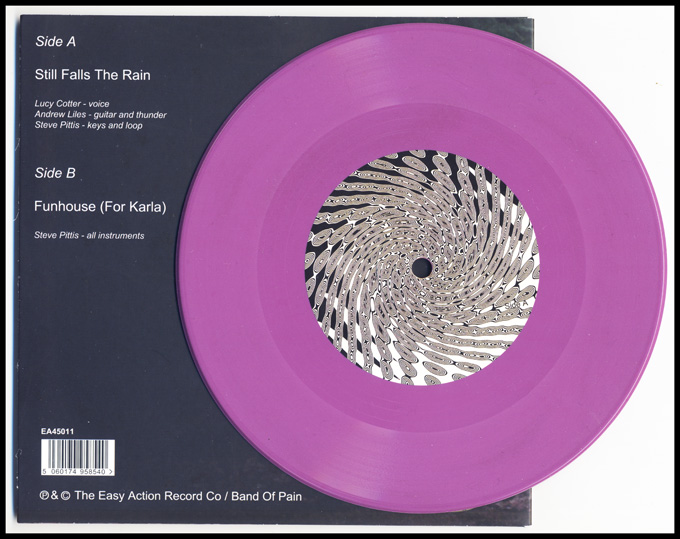 The A Side of this record, “Still Falls The Rain” uses the poem printed on the inside gate fold sleeve of the first Black Sabbath album. The poem is read by Lucy Cotter and Andrew Liles plays guitar.

Press Release
After an absence of a good few years, Band Of Pain return with a 7” single for Easy Action. Steve Pittis: “Since I got the first Black Sabbath LP when I was 12 years old, the poem inside the gatefold has held a huge fascination for me. I’d read it over and over again, looking at the sleeve, and of course listening to the record. It kept occurring to me that they never used it in any lyrics, so 45 years later, it was time to put that right.”

The A Side of this record, “Still Falls The Rain” features that poem, read beautifully by Lucy Cotter, along with Pittis’ atmospherics and Nurse With Wound’s Andrew Liles’ blistering guitar. All research seems to say that the writer of the poem remains anonymous, so if you’re out there, we hope you like it.

Side B’s “Funhouse (For Karla)” deals with the gruesome misery of an execution chamber and is a powerful journey into the horrors of those barbaric places.

FREQ
Where most bands opting to record a take on of one of their influential favourites would opt for a more or less straightforward cover version, Band Of Pain main man Steve Pittis chooses instead to invite Andrew Liles and Lucy Cotter to join him in re-imagining the anonymous poem “Still Falls The Rain”, as found inside the upside-down cross adorning the inner gatefold sleeve of Black Sabbath‘s eponymous first album.

This they do in suitably doom-laden style, all clangour and tolling of deep-down bells smeared over with some excoriating paint-stripper guitar from Liles that bears a passing, if distended, resemblance to Sabbath. An equally ominous threnody washes over the stifling atmosphere, which Cotter’s plain-spoken words cut through the thunderstorm of sampled rain with a distracted, almost hypnotised air. Not so much metal as post-Hendrix fed-back skronk, the results waver from the suitably discordant into the eerily unheimlich, with the ghost of a mordant smile nevertheless playing faintly around the snooker hall klang. What Tony Iommi would make of it is anyone’s guess.

The flipside is yet more unnerving and gloomy, dwelling on the subject of imminent state-sanctioned execution on “Funhouse (For Karla)”, and what words there are buried so deep into the mix as to be almost imperceptible at first. Environmental flickers switch back and forth in the deep, dark mix, riding limpidly beneath relentless monotone pulsations that well up in into a tachycardic rhythm modulated to sets the pulses racing as soundbites on the death penalty pass behind the unfolding sense of dread and doom.

For dark, stormy nights, and even glummer moods.