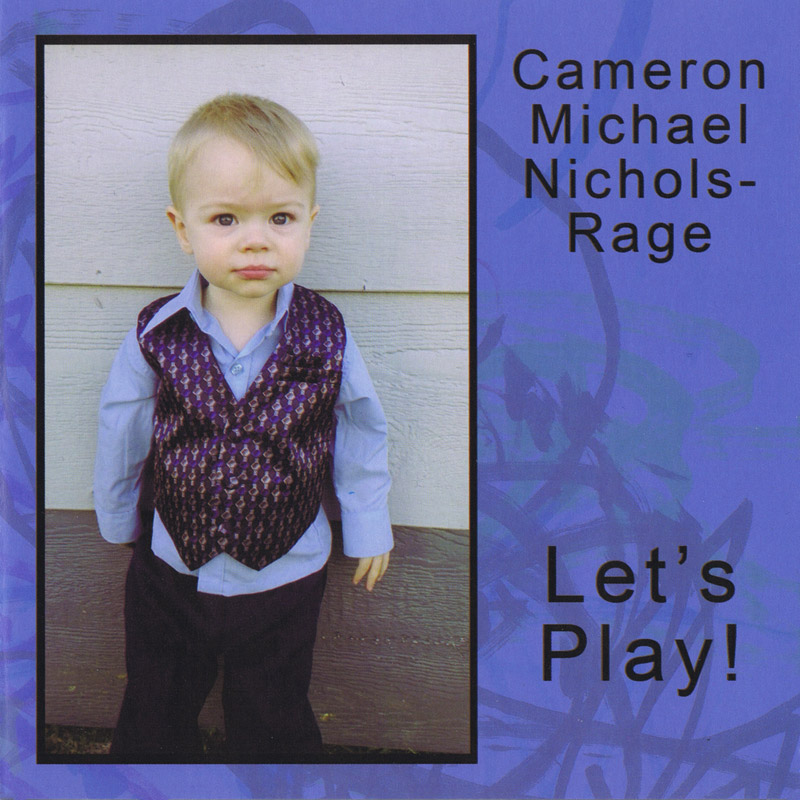 Cameron’s drum parts and vocals were recorded in March 2013 when he was 20 months old making him the youngest musician in the world with a full-length release.

The individual tracks were recorded by the respective artists between March – October 2013.

KFJC On-Line
There’s a Pere Ubu song that has David Thomas warbling about finding his shoes while in the background the drummer hits the snare drum repeatedly as if someone is knocking at the door. That’s the first thing that came to me when I heard Cameron Michael Nichols-Rage’s “Let’s Play”. There was this pounding snare drum and I thought, “Hmmmmm, someone knows their Ubu.” Then came the toddler sounds, babbling talk. Oh, that’s clever. Then it continued into other tracks. And the drumming with electronic twists and noodlings, distorting sounds. Wait. What is going on here? Well something pretty great.
It seems Cameron was 20 months old when this was recorded, drums pounding, voice wailing wonderfully. It was heard by Kawaguchi Masami of New Rock Syndicate fame, who asked Cameron’s father if a collaboration could be made. Thus the stage is set for this interesting and exciting work. Cameron’s family know some pretty interesting folks in the music world who agreed to collaborate with Cameron. Musicians and groups including Numinous Eye, Andrew Liles, alvarius b., Magnetic Lucifer took tracks of Cameron playing and singing and worked with those to make some very fresh, very enjoyable sounds. Call it psychedelic, call it rock, call it experimental sound making, call it improvisational jazz. It is that and more. Just remember when you listen: 20 months! 20 MONTHS!
Reviewed by Naysayer on April 2, 2014 at 12:35 am