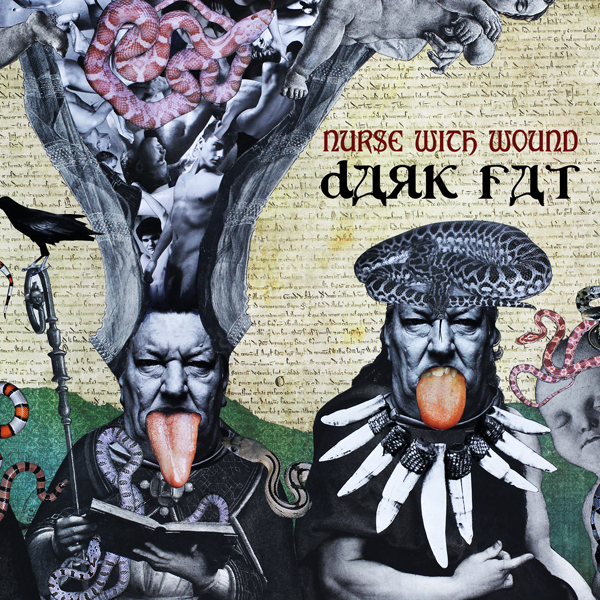 Dark Fat is a celebration and documentation of 10 years of NWW shows but to call Dark Fat a live album is far too simplistic. It is an entirely new recording constructed by combining the most interesting moments of the past decade into unique tracks. We have M.S. Waldron to thank as he is archival commandant of the NWW oeuvre and since 2006 has recorded everything and we mean EVERYTHING. He has recorded all the live shows, sound-checks, rehearsals, off-stage events and even covertly recorded the private conversations of the band. These recordings have been studiously and lovingly crafted into a unique sonic tapestry by Waldron and Stapleton with delicate embroidery and filigree added by Liles and Potter. Listen in the Dark and soak up the Fat.

FREQ
…two CDs worth culled from over ten years of live Nursery action. As you can imagine, it’s a star-studded affair, the vocal list alone is extensive and instrumentally it’s equally massive. Steven Stapleton and Matt Waldron helm in a load of goodness, unleashing plenty of ear-worthy vermin, aghast in halfglimpsed, ill-tampered, darkly woven humour.

Unlike most live albums though, they’ve opted to fickle-finger the fuck out of the time-space continuum and montage the daylights out of everything. A cheeky take on the whole genre, wormholing plenty of still-wet futures, tickled pink in off-stage shenanigans, covertly recorded conflabs and much more chucked into the mincer, ground-up and spat out in bent-up psychedelics and twirling spaghetti.

The first disc breathes a familiar spooked-out ambience, a soured sonic tapestry of sine subsidence with gutsy propellants that we’ve all come to love from this lot. Ertswhile and trippy scoopings that feather-fly into a freaky wing fest. Co-co-oohhh(ing) onto a Nina Simone-esque vocal supplied by Lyn Jackson, her sultry neon spattering delivery giving the blues a much needed resuscitation. A flavoursome Huffin’ Rag lounge bespeckled in creepiness, with zoologicals sliding down some lush, vaguely Faustian guitarscapes. Sweet additions working their many tendrils in sardonic seduction – each listen revealing a host of unheard pleasures that I swear weren’t there on previous sittings. Those sporadic outbursts of rehearsal goo letting fly into screamy dreams and floating saxophonic smears and little midges of sound mulling the ordure until some Brando-type bemoans the liner notes on Soliloquy For Lilith.

“I gaze into the deep still water and that stillness will be in me”, goes a deep ashtray voice over. “Your dreams are also my dreams… I will show you the shape changing and you will become the animals”, this sinister farmyard taking musical hold, flying out in rioting shapes and noisy fallouts, withering on behind the scene antics to jump quickly into a rashy eruptus of fevered auctioneer babble. Forty-five(ish) minutes that whip past you far too quickly, leaving the second disc to unleash a further 72 minutes on your senses.

Now this disc is my fav. Not only does that soulful diva of first instalment return with renewed vigour, but everything seems more focused in its wrongness, frothing topsy turvy with jarring angles; a Disraeli Gear slip of the highest order. There’s also this great re-dux of “Rock’n’Roll Station” on the fourth track that literally coughs’n’splutters into action with blinding brilliance. The taut bassline and wipersnapped recoils milked by vocal nonsensicals. Jacques Berrocal is credited on vocals, but sounds more like Jean-Hervé Péron spearing the leviathan in Francophone mumble and wavering cicada before the puppet strings are cut in favour of 22 minutes of tip-top sonic effrontery that is “The Machinery Of Hearing”, a breathtakingly broken track that riffles erratically through an rather extensive toolbox, taciturned inward on nocturnes of Spanish guitar. Lumber-punching the laundry-mart service washes, it bubbles up on blasts of acidic weirdness and hauntingly executed musique concrète — vibes that will take months to unravel.

Nice spacey moments follow to clear the way for that groaning foghorn of the Surveillance Lounge slowly wiped away on screams and slowed conversation, false starts and boxing shadowed pile-ups. Then booom!!! The hidden track hits – giving the package that must-have status. A “Rock’n’Roll Station” deluxe that wipes the previous version clean away. This may be from The Forum in London a few years back (an I was there moment that glows fondly in my memory), Stapleton’s voice given a nice echoing multitude as Mr Liles‘ wah passions slide all over it, plenty of sonic garbage leaking the edges too. Tickety-booing down the corridor to a cool beer, but not before blitzkrieg(ing) the place in some heavenly noise.

BRAINWASHED
I gave up trying to make sense of Nurse With Wound’s sprawling, self-cannibalistic, and absolutely inscrutable discography quite some time ago, but it definitely seems like it has been a very long time since Steven Stapleton has released anything that meets my not-particularly-stringent “this is an actual, legitimate new album” criteria (excellent Graham Bowers collaborations aside, of course).  Consequently, I was hoping Dark Fat would be the album to end NWW’s long and perversely prolific silence (it was explicitly billed as “long-awaited,” after all).  Alas, it is not exactly the bold new artistic statement that I was hoping for.  Instead, it is a sprawling collection of “live” recordings ranging from rehearsals to sound checks to actual gigs.  Despite its dubious hodge-podge origins, however, Dark Fat actually feels an awful lot like a studio album–quite a damn good one, even.  While longtime NWW fans will probably experience many flickers of recognition over the course of these two hours, Stapleton and his collaborators have so thoroughly reshaped and recontextualized everything that it all feels fresh, vibrant, inspired, and appropriately disorienting all over again.

The best way to summarize this album is to say that it feels like Steven Stapleton assembled an entire village-worth of like-minded artists for a very abstract and cavalier traipse through some of NWW’s greatest hits.  In a way, I suppose that is exactly what he did, but the twist is that it was a very fitful, slow-motion, and “revolving door” process that spanned six years.  In any case, aside from the core group of Stapleton, Colin Potter, Matt Waldron, and Andrew Liles, Dark Fat features a head-spinning roster of avant-garde luminaries in cameo roles ranging from Jacques Berrocal to Stephen O’Malley to James Blackshaw.  As if that were not enough, it also features some unwitting contributions from Klaus Schulze, Michael Schenker, and Cream’s Jack Bruce (if the roll call during the final untitled track is to be believed).  Clearly, even the deceased were clamoring to get in on this party.  Naturally, that deranged eclecticism extends to the instrumentation as well, covering everything from Hawaiian guitars to saxophones to cornets to smoke bombs.  Given all that, it is unsurprising that Dark Fat is a deliciously difficult album to wrap my head around, as it is massive, freewheeling, and kaleidoscopic in the extreme.

Lamentably, I do not have total recall of NWW’s entire back catalog (does anyone?), so the only real “hit” that jumps out at me is “Rock’n Roll Station,” which turns up twice in impressively mangled form.  On “Rock n Rolla 1959,” the original groove is transformed by the addition of a laid-back bass line and a bizarre, stream-of-consciousness monologue from Jacques Berrocal.  Later, on the untitled album finale, the band reprises the song in more recognizable form, but stretches it out into a lazy 9-minute jam peppered with squalls of wah-wah guitar, hard rock shredding, stage banter, and bouts of extreme noise chaos.  If any one piece can be said to represent the entirety of Dark Fat in microcosmic form, it is undoubtedly that one, as a recurring theme throughout the album seems to be hallucinatory abstraction coupled with amusing nods to conventional rock tropes.  The lion’s share of the album, however, just feels like an amorphous and unpredictably evolving collage of everything NWW does best: ominous ambience, garbled vocal cut-ups, odd juxtapositions, snatches of old exotica records, and a host of electronic blurts and squiggles.  The sole significant exceptions are “Devil Dreamin’” and “Devil is this the Night,” as Huffin’ Rag Bluesvocalist Lynn Jackson returns for a satanic pair of blearily soulful noir-jazz numbers that actually feel like legitimate songs.  In addition to being the album’s finest moments, the Jackson pieces highlight yet another recurring theme that pervades this collection, which is inventively recalling the spirit of a previous NWW highlight rather than just explicitly reprising it.  Consequently, much of Dark Fat feels simultaneously new and familiar, like hearing some lost outtakes from a favorite album.

Naturally, a two-hour retrospective of soundchecks and rehearsals is going to have some faults, but Dark Fat actually has far fewer flaws than I would have expected.  The worst offenses are probably just that a few pieces overstay their welcome and that the band was definitely in a very self-indulgent mood at times.  Also, the variations on “Rock’n Roll Station” are not nearly as good as the original, though the intent was clearly aimed towards gleefully pulling it apart and détournement rather than something as banal as improvement.  A far more fascinating subject is how Stapleton inventively makes a virtue of Dark Fat’s flaws, as this seems like a totally phoned-in album on paper.  In reality, however, this eclectic, free-form grab-bag is actually one of the strongest NWW albums in recent memory.  It is not definitely not new for high art, low art, homage, surrealist lunacy, impish humor, and just general dicking around to all coexist on a Steven Stapleton album, but it rare for them all to do so quite this effectively and naturally.  Dark Fat is essentially an unexpectedly brilliant editing tour de force, masterfully distilling a large part of NWW’s bizarre and wide-ranging legacy into richly textured fever dream of an album.

THE QUIETUS
A command of chaos is always guaranteed at a Nurse With Wound show. Despite being a legendary dealer of surreal suppositories for the ears since 1979, its live incarnation is only ten years old. Instead of the predominantly solo stewardship of Nurse With Wound’s releases by Steven Stapleton (assisted by one or other of his semi-regular co-conspirators), the gigging band is a veritable super-group, pooling the long-toothed talents of engineer of outsider electronics par excellence Colin Potter, master manipulator of foreign objects, Matt Waldron (AKA irr. app. (ext.)) and Andrew Liles’ rude and excessively excellent earwormery. Together they cast their expertly charged rods of melting modes over, under and into Stapleton’s bowed, ominous sediment.

Being a reliably awkward band, Dark Fat isn’t quite a live album in the regular sense, but is formed from recordings of their shows and rehearsals, all meticulously collaged together by Stapleton and Waldron into a generous two-hour dose of brimming excitement, equal parts danger and delight.

After a while it comes across like a phantasmagoric journey on a Victorian steam train where creaking carriages are populated by Ray Harryhausen’s skeletons whose bones clack in time with the voodoo-like rhythms of the wheels on the rickety track while the air is filled with the engine’s diverse, intoxicating vapours. The irregular stops at many and varied stations and maintenance depots see the carriage doors open up onto alien interzones where unpredictable excursions ensue, ranging from psychedelic wig out to electro-acoustic skullduggery.

While growing up in the eighties I tried to imagine what sort of futuristic bands I might see in the twenty-first century should I survive the supposedly imminent nuclear apocalypse. On the evidence of Dark Fat (a term they use to describe “Psychopathic scumbag individuals, regimes and corporate filth”) I now realize Nurse With Wound are that band, nobly and gleefully playing against the absurdity of our times.