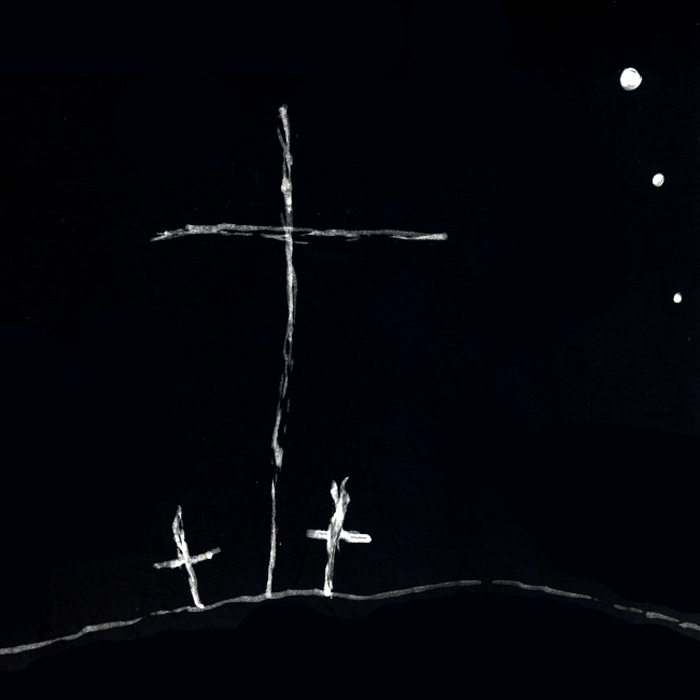 Honeysuckle Æons immediately sets itself apart from Current 93’s recent trilogy of revelatory works (Black Ships Ate The Sky, Aleph At Hallucinatory Mountain, Baalstorm; Sing Omega), abandoning the ambitious and heavily collaborative towers of sound and shutting itself away in a quieter, more introspective space. Sonically, the focus of this new album is melody and the minimal timbral vessels that carry it – instead of passing his initial composition fragments around a wealth of different personnel and building upon them, David Tibet has left them comparatively pure and untouched, placing his streams of lyricism in the sparse melodic company of piano, guitar and organ.
It’s a very strong start. “Moon” is a haunting piano piece, encircled by phantom Theremins that wail in a mournful vibrato. Tibet traces the melody to begin with, but his voice trails off into a torrent of his own thoughts, a bleak and heartfelt voice granted its own desolate space in which to reverberate. “Persimmon” is more measured and pensive in its delivery but retains the piano core, and Honeysuckle Æons seems to be set upon a theme at this point, coming across like a ghoulish, Theremin-laced re-visitation of Soft Black Stars.
But from here on in, the album states its intent to explore elsewhere – “Cuckoo” taps into the ritual percussion and middle-eastern oud found on Baalstorm; Sing Omega, “Jasmine” sets out a simple duet between Tibet and a catchy organ loop, “Honeysuckle” chirps like a deathly fairground ride. Experimenting with different sounds and moods is still high on the C93 agenda, even if this occurs within a less elaborate palette.
However, Honeysuckle Æons starts to struggle when some of Tibet’s melody loops crumple under the harsh light of intense focus, and this seems to occur more frequently as the album progresses into the second half. “Sunflower” and “Lily” spring to mind in this respect, and while Tibet’s vocal delivery strives to galvanise these pieces with purpose, they’re simply devoid of the strength to withstand the relentless repetition they’re placed under. This is an inevitable danger when moving from a saturated sonic landscape and back into a “bare bones” approach – these compositions no longer have towering forts of sound in which to hide and be strengthened.
But on the whole, the album is refreshingly concise – wiping away the grand layers of sound and placing Tibet’s words and melodies squarely at the forefront again. Lyrically, the imagery seems to surge in thicker and faster than before, rich in an impenetrable ambiguity that tugs the mind in several directions at once. It’s nice to be quietly and unexplainably stirred by Current 93’s music in this manner. It doesn’t knock you back with the direct velocity of Aleph, or the panoramic scale of Black Ships At The Sky, but, like those ghoulish Theremins that creep into view on many of these tracks, Honeysuckle Æons haunts you, beckoning you back with its rich and unfathomable sense of intrigue.

BRAINWASHED
Considering this new album has arrived so soon after David Tibet had finished his Aleph trilogy, it is not a shock to find that it essentially continues from where Baalstorm, Sing Omega left off. However, where Baalstorm, Sing Omega was vibrant and colorful like a decadent religious feast bathed in sunlight, Honeysuckle Æons is a night album; the yawn of a night sky speckled with stars and celestial bodies. The rock excess has dissipated and in its place Tibet returns to the introspective poet last encountered on Soft Black Stars and Sleep Has His House.
This introspection is not restricted to Tibet, the sprawling cast that was Current 93 of recent years has been reduced to a handful of players. Baby Dee returns to the piano stool, her playing poised somewhere between her usual music hall style and Maja Elliott’s raven-like playing on Soft Black Stars. As well as piano, Dee also plays some terrific organ on “Jasmine” and, on “Honeysuckle,” she picks up on the carnival organ theme explored briefly on the last album (although with far less violence this time). Dee’s piano is paired with a mournful theremin, Armen Ra operating the ghostly synth with a control that is so often absent from the instrument. The theremin adds to the nocturnal atmosphere, there is something pitch black about its tone; it sounds like a gap between the stars.
Baalstorm’s African and Middle Eastern flavors are also reprised as Eliot Bates makes a return appearance, playing both melodies on the oud and percussion on the bendir and erbane. His gorgeous contributions are enhanced by the inclusion of the kalimba (played by Lisa Pizzighella). There is a split running through the songs on Honeysuckle Æons, roughly half of the songs based on the piano or organ and the rest centered on the oud. At first, it made Honeysuckle Æons feel fractured, like two different albums half made and half finished. Yet, as I listen to it again and again (and especially after dark), I realize it all works together perfectly. The organ and the traditional instruments link together like the different aspects of the faith explored by Tibet in his lyrics; the more modern rituals of Christianity linked back to the original ideas seeded in the Coptic texts that Tibet has taken such inspiration from. This linkage is helped by Andrew Liles’ treatments of the music and words (subtle but there) and his job mixing the album; as disparate as the piano and oud-based songs could be, he makes them feel like different sides of the same instrument.
Looking more closely at the lyrics, Tibet has taken the same ideas that ran through the Aleph trilogy but condenses them into an even more apocryphal and apocalyptic tale. Yet where there was drama and excitement in the Aleph trilogy, here he brings it back down to a personal and spiritual oblivion (“Stripped back to the real me”). His singing reflects the music’s gentle but insistent push; the screaming and the shouting have given way to realization and acceptance. That is not to say that the eschatological leaning of Tibet’s words is gone, the album is peppered with these references (everything from the “Bloodface” of Black Ships Ate the Sky to allusions to Milton’s Paradise Lost). Now these references seem to be almost psychological, not the actual Armageddon of this world but of Tibet’s world.
This more sedate and solemn version of Current 93 makes sense in the context of the year that was for Tibet. Change in the form of death, both Sebastian Horsley and Peter Christopherson’s passing left their mark on Tibet, and in the form of a new beginning as he embarks on a new phase of his academic career in Coptic studies. Events like these make you take account of your life in their own way and Tibet has put these feelings into Honeysuckle Æons rather than a diary. Like Sleep Has His House was a requiem for his father, Honeysuckle Æons is a goodbye to lost friends and a hello to the future. John Kealy