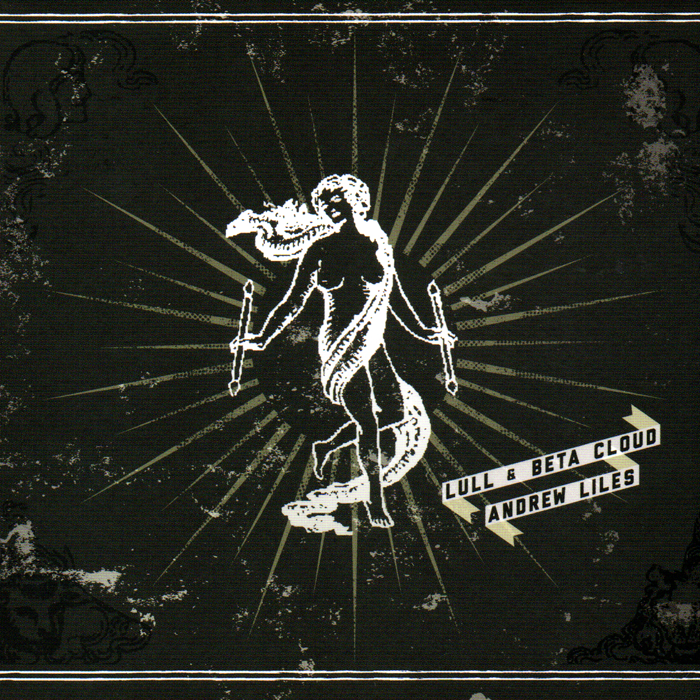 Circadian Rhythm Disturbance is a collaborative piece by Lull and Beta Cloud based on the concept of how insomnia can effect thought patterns, originally released as a limited a 3″ CDR on Laughing Bride Media in 2008.

This deluxe Digipak edition includes the original track and a remix/deconstruction of it by Andrew Liles, with new artwork referencing tarot cards, sleep deprivation and chronobiology – the study of circadian rhythm.

CHAIN D.L.K
Have you ever been compelled to deal with keeping a vigil over baggage by some strike by airport’s personnel, extreme atmospheric disturbances or Icelandic volcanoes? Have you ever experienced zombie-like condition during daytime for a bad jet-lag or strong occupational stress? If so, you could have experienced the malaise mentioned in the title of this release, the mildest one as the most serious case circadian or nycthemeral rhythm disturbances are related to worrisome sleeping sickness. Originally released on a 3″ CD-R by Laughing Bride Media four years ago, this sonic pearl by Lull, the forerunning beatless dark project by that hyperkinetic musical genius of Mick Harris, who has been considered one of pioneer of the so-called Isolationist ambient music, and Beta Cloud, project of NY-based musician Carl Pace, who gained some respect in the scene since its catchy release “An Open Letter To Franz Kafka” with Aidan Baker ad for some interesting soundscapes in his album Lunar Monograph for its ability in setting field recordings in muffled drones and dark-ambiuent gelatins, “Circadian Rhythm Disturbance” is a 20-minutes lasting piece, re-issued by Cold Spring which assigned visuals to talented designer Chase Middaugh. It looks like a sonic description of what many insomniacs experience while they’re caught by that disturbing hypothalamic sensation after a long period of sleep deprivation or chronobiological disfunctions, sonically represented by an oppressive drone where other sonic stimulations such as alerts, chatters, chirps, pulses, clicks, trafic noises and so on have been turned by a fatigued consciousness into something extremely upsetting, a sonic translation of yuppie flu or eyestrain, body temperature alterations, peevishness and other symptoms related to sleep disorders. The second track is a reconfiguration (or better…another toothpick…) by one of the most eclectic veteran of sound arts, Andrew Liles (Nurse With Wound), who tips over the sonic pelting so that it seems he departs from “inner” spaces (for instance the chattering which are in the beginning of the original version have been placed at the end of the track) by putting the emphasis on field recordings and gradually disturbing sonic hype, noisy streams (it’s nice the transmutation of a notebook fan blow into an air-jet turbine engine!) and boulder-strewn sonic paths within narrow sequences of pulses, disquieting harpsichord arpeggios and chimes, matsuri-like hits, interrupted by random disturbing sonic sketches such as squeaks, clinks, newborn screams and…shhhh…babies are sleeping!
Review by: Vito Camarrett

DUSTED MAGAZINE
Dark Ambient is often a frustrating and unrewarding genre. Whereas “regular” ambient music remains dominated by the theories and ethos of Brian Eno, managing to be both immersive and intangible, Dark Ambient’s focus on fear and oppressiveness mean it’s rarely either discreet enough to work as background music, nor has it the melodic elegance that made Music For Airports such a haunting work. Maybe a comparison with standard Ambient is unfair, and misses the we-wanna-scare-you point, and there are exceptions (KTL, William Fowler Collins, Lustmord), but for the most part Dark Ambient seems hamstrung by its own focus on being unsettling, and over the kind of track lengths used in ambient music, it quickly becomes dull, overbearing or irritatingly oblique.
That said, any genre can deliver remarkable results if one applies a robust and clearly thought-out concept, and that is exactly what Lull & Beta Cloud did in 2008 on their limited-release CD Circadian Rhythm Disturbance, which has been given the reissue treatment by Cold Spring. Lull — better known as Napalm Death’s Mick Harris — and Beta Cloud’s Carl Pace explore the state of insomnia, and their deep bass drones and snippets of intangible voices and sound effects recreate that dreadful state, when your mind hovers between wakefulness and near-sleep and where every sound from outside is too quiet to latch onto but loud enough to jar every sense in your body. The duo’s moody, fiercely tense sonic expanse, in which everything progresses in a state of near-stasis yet remains deeply involving, manages to eschew the clichés of “dark” music to create something that is so conceptually relevant it slips under your skin and haunts your thoughts without you even noticing.
If Harris and Pace’s take on the concept of “Circadian Rhythm Disturbance” is haunting, albeit whilst relying on the listener’s foreknowledge of the ideas contained within, Andrew Liles’s curious “remix” (the quotation marks are necessary) takes things to a different level altogether. A better word for what Liles does would be “destruction,” as he chops up the doom-like drone of the original like a madman equipped with a pair of scissors and promptly ups the angst and the noise. Disturbing, ear-shattering samples and found sounds crash into the mix, tearing any sense of equilibrium to pieces and leaving gaping holes of morose silence. The sounds Liles introduces are often unrecognizable, distorted to the point of atonality in the manner of Jason Lescalleet and Graham Lambkin’s Air Supply album. Sudden surges sound like motor vehicles accelerating, intensifying the disorientation and near-physical sickness of insomnia.
Circadian Rhythm Disturbance was a pretty brilliant approach to Dark Ambient in and of itself, meriting comparison with Thomas Köner at his most atmospheric. With Liles onboard to fuck things up in even more unsettling and intense ways, it has grown into a messy, haunting and unrelentingly powerful beast. By Joseph Burnett

MUSIQUE MACHINE
Circadian Rhythm Disturbance, a 20-minute piece created through a cross-Atlantic collaboration between Birmingham, UK’s Mick Harris and New York’s Carl Pace, was first released in 2008.
Harris’ Lull project first saw the light of day in the early nineties when it was incorporated into the awkwardly named ‘isolationist’ category that brought together other beat-makers in need of respite from the tyrannical grids of their MIDI sequencers with post-industrial artists exploring darker textures in ambient music. While the tag didn’t last for long, a preoccupation with sound and how it can affect our perception of the world continues to drive ever-increasing amounts of artists to work with field recordings to create mediated realities. Beta Cloud has been doing just that since 2006, often adding dreamy, improvised guitar manoeuvres to coerce our attentions into going beneath the mundane, predictable surfaces of everyday life. And for Circadian Rhythm Disturbance, Pace and Harris aim was to present the psychological affects of insomnia through processed recordings with added atmospheric augmentations.
The result is a miasma of cars and voices streaking by, presumably through the open window of the compromised insomniac, as a hi-pitch needle injects an unpleasant tinnitus-like tone. Then, as if the listener has ingested sleeping pills, things start getting blurry as the needling is mercifully drowned out by the urban ambience increasingly soaked in reverb and delay as it coalesces with layers of slowly churning, deeply breathing subsonics. Both paranoid and somnolent, the cycling surges extend until three-quarters of the way through the piece when the hi-pitch tone violently returns to cut through the murk. Rudely roused, it makes the outside ambience take on a less soporific hue as the cars and voices become recognisable once more.
For this re-release, Cold Spring drafted in Nurse With Wound’s Andrew Liles to ‘reconfigure’ the experience as only he knows how. Belligerently ditching most of the original, Liles presents an array of clicks, whirrs, snips and squeeks in his proprietary high-definition fashion, sounding like the assembly of clockwork machinery that regularly and rudely interrupts the odd subterranean rumble. From here it builds into a battery of looped industrial hits, sometimes seeming like the CD has stuck, as they hammer and crash regularly and stubbornly like some kind of industrial gabba. But, despite growing to destructive levels the beating is never left alone for long, but faithfully curtailed by the mechanical ratchetting, like some kind of battle between time as it is tightly measured and how it is more loosely perceived. All this aggression is variously visited by snippets of music hall piano, lightly tinkling bells, stately Spanish guitar and lithely twisting glassy tones to form a bemusing but no less beguiling piece in stark contrast to its predecessor.
And it is this contrast that makes this release a particularly exciting, involving experience that travels from the disturbed drift of the original to the vicarious violence of Liles’ phantasmagorical time attack. Russell Cuzner

COMPULSION ONLINE
Circadian Rhythm Disturbance Reconfigured features an original collaboration between Mick Harris’s Lull and Beta Cloud’s Carl Pace, originally released as a 3-inch CD in 2008 on Laughing Bride Media. The new Cold Spring edition, with brand new artwork, is bolstered by a radical remix from sound artist Andrew Liles.
The opening moments of the original piece feature environmental sounds such as street chatter and passing traffic – as if caught from an open bedroom window. Although existing simultaneously with Scorn, Lull was born as a project for Mick Harris’s beatless excursions. It’s more than probable therefore that the slight rhythmic undertow of gentle pummel here was supplied by Beta Cloud’s Carl Pace. Either way, it is there underneath the lulling ambient shimmer and low, low shape-shifting drones that comprise ‘Circadian Rhythm Disturbance’. With voices half-glimpsed voices set against slight changes in tone with the occasional piercing frequency, the overall atmosphere remains foggy and muggy with muffled indeterminate sounds succinctly conveying the feeling of insomnia where sounds are detected but never fully deciphered. And while it captures the hinterland between sleep and an attentive waking state, the end section delves deeper into denser and murkier terrain with lolling dark ambient reverberations, capturing the frustration and anxious moments of sleep deprivation.
The Andrew Liles remix is altogether different, and with its recurring cuts, it seemingly captures cycles of interrupted sleep patterns. Liles’ time with Nurse With Wound is brought to the fore with the sound abstractions on his ‘Another Toothpick’ remix. Drone sounds are cut with grainy ambient rhythms. Moments of silence and squeals are replaced with industrial drone, ambient shimmer and grainy clicks and cuts. Those clicks, it could be argued, might even represent the interrupted ticking of a clock. Liles’ ‘Another Toothpick’ remix becomes more of a headfuck later on with thumping heavy charges and escalating drone attaining a heavy rhythmic force with its stuttering beats and charged explosions. The entire piece sounds like an abstract collage of disquieting tones spliced with moments of silence before returning to the street chatter that opened up the original, That, however, would be failing to mention the short passages of harpsichord, jet engine propulsions, bells and electronic thuds and the ambient drone and shimmer that underpinned the original work by Lull and Beta Cloud.
As the original edition of Circadian Rhythm Disturbance Reconfigured was limited to a mere 100 copies or so, this haunting sound creation was ripe for rediscovery, and here alongside Andrew Liles’s skull-smashing radical remix, it’s a more than worthy (re)issue.