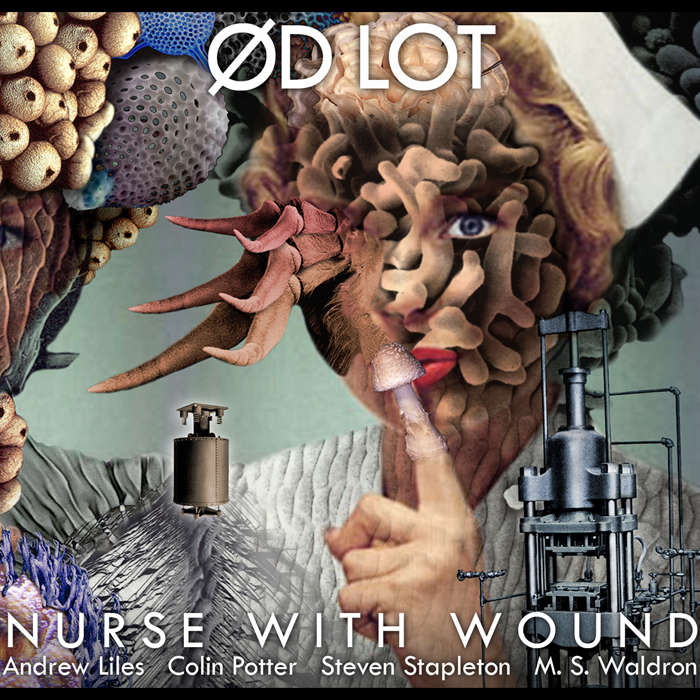 Available only from mailorder and at live shows.

AQUARIUS
The title pretty much says it all, if you were to pronounce it “odd lot.” That should go without saying for any given Nurse With Wound record, and this one certainly qualifies, even though technically Od Lot shouldn’t be considered a proper Nurse With Wound record. Rather, this is a four-way split between the four touring members of Nurse — Steven Stapleton, Colin Potter, Andrew Liles, and Matt Waldron – each offering a set of solo tracks. Colin Potter’s pieces are worth the price of admission alone, with the first being a creepy, creepy horrordrone that ranks as some of the finest that we’ve heard from Colin. Hissing pulses swell into an undergirding rhythm that guides a series of undulating, arching tones. Much closer to a really dark Biosphere or maybe even some of the later digitally sculpted Zoviet France pieces. His second piece plods with a mechanoid plod culminating in a huge guitar crescendo. It’s surprisingly straight forward for a Nurse With Wound project; but it’s actually pretty damn amazing, more like a brighty rendered Troum or Nadja piece. Mr. Liles offers a series of dada-exotica following his contributions to The Bacteria Magnet with some fucked-up skronk laced around slinky disco cuts with funky wah-wah guitars and freakish whisperings upfront in the mix. The Stapleton track features a vulgar rant by Hazel Two-Twigs against an unknown Texan hipster, who probably had “it” coming to him; and Stapleton’s backing noise is a signature, wild collage of splutter, squiggle, low-slung prog basslines clinging to a breakcore rhythm (remember his long-promised hip-hop album?). Waldron’s solo track is a splattered semi-improv number for bass, guitar, and drums, more in keeping with what’s been found on his Perekluchenie album and some of the proggy live material he’s done as irr. app. (ext.) in recent years.