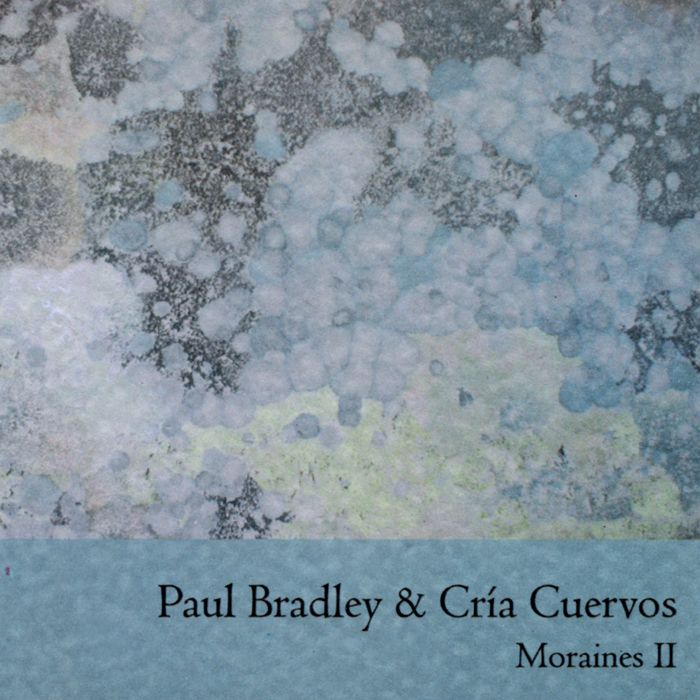 Moraines II is a radical re-working of the limited CDR release ‘Moraines’. The original recordings have been augmented, re-worked and newly mixed into an entirely different piece of music.

VITAL WEEKLY
About two years ago we reviewed ‘Morainos’, a collaboration between Paul Bradley and Eugenio Maggi, aka Cria Cuervos from Italy (see Vital 516). Since they have been working on ‘Moraines II’, or rather re-working the first one. Such can be the world of drone music. One drone – endless possibilities. The original recordings have been used, highly processed field recordings that is, and together they created quite a dark album of drone music.
Rather than moving about in one single drone, this new piece moves along various paths, clearly divided into separate parts, each with it’s own build up and changes, before moving to the next piece. Some clear field recordings punctuate the music, such as rain sounds, birds and footsteps. Perhaps nothing new, but the minor changes, such as the various parts approach, make this however quite a nice disc.
Plus more treatments arrive through the work of Andrew Liles, who was given all the material and made a remix (a phrase we should not use for the first track).
Liles has a distinct sound (well, as far as I know, as his output is vast and incomplete here) that is somewhat close to the more eerie Nurse With Wound sound. Here via the reverse sound approach, like a single wave washing ashore and a metallic drone rumble make up a creepy soundtrack to a perfect nightmare. Sounds arise from previous, and make this a more singleminded piece. Quite a nice one at that. FdW (Vital Weekly)