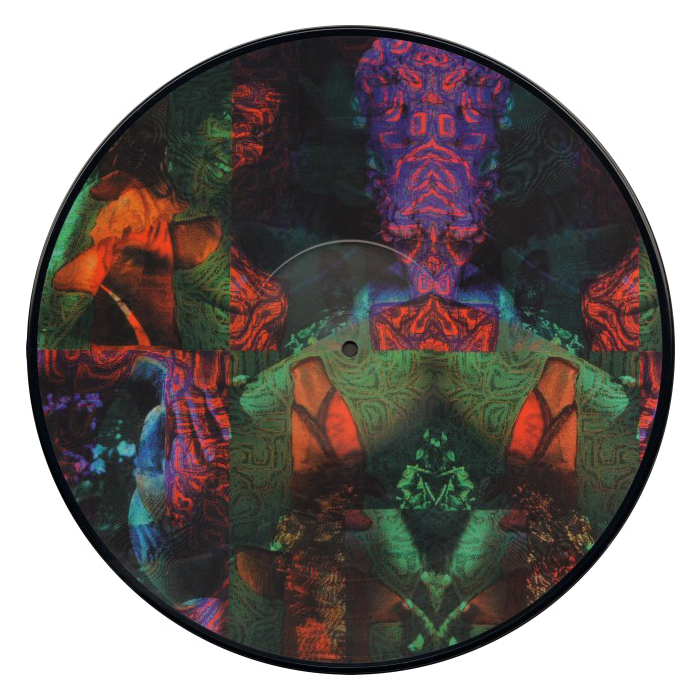 “Cruisin’ For A Bruisin'” and “Thrill Of Romance…?” appear in an alternative guise on the CD “Huffin’ Rag Blues”. “Bei Mir Bist Du Schön” also appears in an alternative version as the final section of the last track on the album entitled “All Of Me”.

Limited edition of 300 on white vinyl of which 100 were distributed randomly with the regular black vinyl edition while the remaining 200 were available from the label mail order and are signed by Steven Stapleton & Andrew Liles.

The picture disc version was in an edition of 500 unique copies, each disc signed and/or drawn upon by Andrew Liles and/or Steven Stapleton. The paper parts to the disc were signed and altered before the record was pressed so the signatures lie under the actual vinyl.

In a situation that is not entirely unexpected, the latest album from Steven Stapleton has caused much controversy amongst fans with opinions ranging from it being one of his best to it being one of his biggest turds. Even here on Brainwashed, opinions were mixed with the review here concluding that “disappointment” sums up the album to my own view that it is pretty damn good. This 12″ will probably not change many people’s views of the album, it is an aside that those who are enjoying Huffin’ Rag Blues will dig but I am not so sure about those who found it hard to stomach.
Two of the album’s tracks get reworked on The Bacteria Magnet. The first is “Cruising for a Bruising,” one of the better offerings on Huffin’ Rag Blues whose motorik beat and collage of noise sounds like Faust covering Kraftwerk’s “Autobahn” (which would be a very lovely thing if it were to happen). Unfortunately the mix on The Bacteria Magnet is not quite as captivating. It is a bit flaccid here, lacking the oomph of the album version. It is like listening to the same song coming from someone else’s car as they drive frustratingly slow in front of you.
However, this is the only stumble on the 12” and from here on in, things are mightily interesting. The alternative mix of “Thrill of Romance…” works far better than the Huffin’ mix. The twisted spin on MOR jazz is menacing and mesmerising; Freida Abtan’s vocals seem almost dead, the emotion stripped down to a lonely husk. The music moves from being a fairly standard double bass and organ arrangement to a progressively stranger buzzing and whirring swirl of sound.
The two non-album pieces are both of a high quality. “Bei Mir Bist Du Schön” takes the slow, jazzy romance song and turns it on its head. The pulsing noise (out of time with the vocals) and the shimmering Lilith-esque drones make for quite an unsettling experience. “The Bottom Feeder” is more like old school Nurse than any of the other pieces here. It is a chaotic mess of sound, switching between destroyed rhythms and aural abstractions that make Nurse With Wound the constantly rewarding beast that it is.
The old time rock’n roll and surf influences along with the sheer strangeness of Stapleton’s arrangements bring to mind David Lynch’s appropriation and warping of ’50s and ’60s American pop music in his movies to make the surreal situations seem more familiar than they should be (such as the prostitutes dancing to “The Locomotion” in Inland Empire or the jitterbug scene at the start of Mullholland Dr.). Maybe because Lynch and Angelo Badalamenti have done this sort of thing so well for so long that Nurse With Wound’s move in this direction does not sound so fresh. I know Stapleton has tried something similar before with Sylvie and Babs but to my mind, this is a Lynchian approach to those rock’n roll and lounge standards. The Bacteria Magnet and Huffin’ Rag Blues are a great experiment but I wonder if this is a temporary digression by Stapleton or whether he will be working with similar sources for a long time (and if so, does this style have the longevity to warrant another album)?

KFJC
Track One, Side A: The Bacteria Bitch Mix of Cruisin’ For A Bruisin’ would be a great track to play if you wanted to assault listeners during the morning or evening drive, (that is if it weren’t for the naughty language) tires screech, sirens wail, chaos abounds in a catastrophic aural onslaught, ok maybe I have gone to far, no wait it is the collective that is NURSE WITH WOUND that has gone too far, leaving skid marks on your eardrums and broken glass in your face.
Track Two, Side A: Total departure from first track. Picture yourself if you will in David Lynch’s world of the film Blue Velvet…a chanteuse is forced to sing for you while a man in black inhales nitrous oxide in the corner…Woman singing with sparse piano and all sorts of ominous atmospherics. CREEPY.
Track one, Side B : More Lynchian undertones with stand up bass, percusssion, effects and dreamy detached female vocals “the night is cold and i am so alone, i would give my soul to call you my own…” Very nice and a bit reminiscent of Julee Cruise and the Wild At Heart soundtrack.
Track Two, Side B: Another departure, noisey industrial, vocal manipulations, whirling, crashing, looping, screams, blurps and beeps, did I say noisey? Yeah, I almost forgot, throw a music box on top, honk at it and smash it with your fist. This nurse will help with your wound, after she inflicts it.