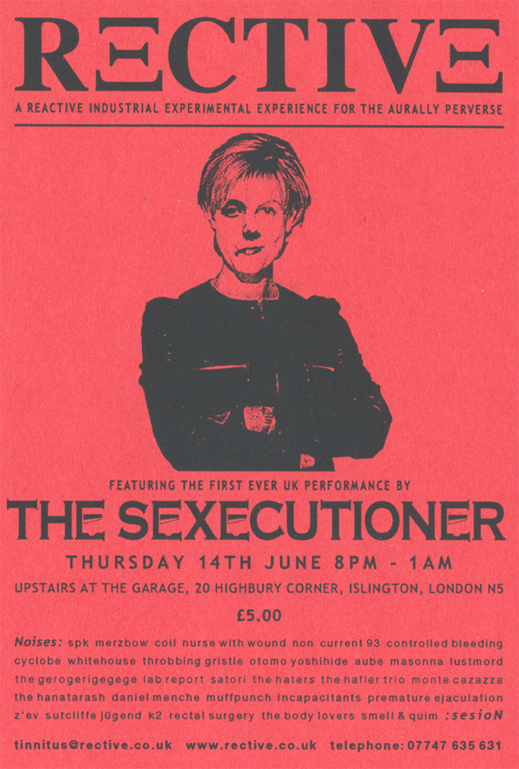 Album recorded for a one off live show at noise club ‘Rective’ in London, UK, 2001. Under the pseudonym ‘The Sexecutioner.’

The album was also re-released in 2020 as a slightly remixed version compared to the download and original mixes. Each individual copy was unique as a semi-pornographic, juvenile drawing by Andrew Liles had been EXECUTED on each and every disc. It was issued in an edition of 23 copies.

The strange and enigmatic figure of The Sexecutioner is that rarest of things, a true innovator and breath of fresh air in the hackneyed and sound-a-like world of power electronics. While many copycat power electronics acts think it enough to simply blast out white noise and shout the word ‘fuck’ every so often in the hope that it’ll offend their parents, The Sexecutioner has tackled this sub-genre from a totally different and individual perspective.
His debut release, the lavishly titled Enter The Ovum Deluxe (CDR 2001), opens with the bawdy and untainted strains of burlesque classic ‘The Stripper’, only to have its rhythms twisted back on themselves, slowed and disjointed; “Do You cum here often?” asks a heavily processed female voice. Crashing white noise blasts out, interrupted by the comic sounds of a cuckoo clock. Track two begins with still more burlesque sleaziness, torn apart a moment later by cascading noise, cut up and reverbed before bursting yet again into another synth distortion fest, interspersed with harsh, jazzy plunderphonics. From here on in the album descends into a truly depraved catalogue of sexual perversions and taboos, each explored with unflinching sickness and characteristic lack of restraint.
The stuttered, whispering vocals of ‘Insex’ are spat out over the sampled, looped refrain of “My Pussy belongs to Daddy”, crackling classical music changes to droning, which is decimated by crippled electronic noise, liquid sounds play beneath a distorted/vibrato entreaty to “drink from the bearded cup”, all deviant life is here, all delivered with either the blackest of humour or a most worryingly accomplished fervour. The piece de resistance of this CDR though is undoubtedly ‘Prinsexdie’ a scathing attack of the sycophancy and cloying sentimentality surrounding the death of Princess Diana. Revving engines, distorted vocals seethe “Princess, Princess why did you leeeave us?”; amplified sounds of car crashes are followed by grinding repetitious noise, relentless and abrasive. The track ends in a scathing parody of jingoism with a whole choir singing ‘Jerusalem’. The Sexecutioner is a one man cabaret of misanthropy and depravity, like the Carry On team meets de Sade, like a legion of lingerie wearing mental patients on an alcohol fuelled scatological and orgiastic raping spree; both a truly original and worthy addition to the world of power electronics.