Voice Of The Seven Thunders 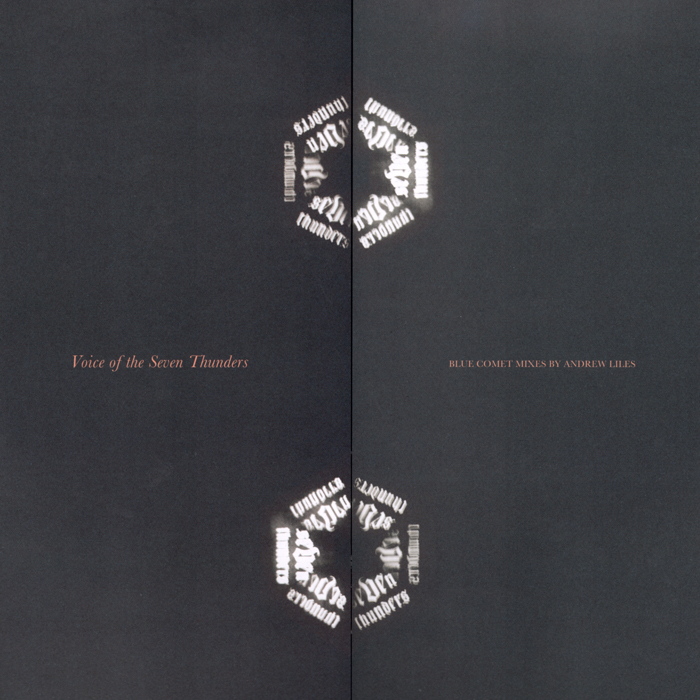 4 songs from the 2010 Voice of the Seven Thunders LP with remixing and additional instrumentation by Andrew Liles.

Comes in a custom gatefold sleeve: Litho-printed, hand folded and glued, with tip-in photograph. There were 2 different photos used.

Boomkat
…Over a year since he pushed into deeply psyched terrain on his ‘Voice Of The Seven Thunders’ LP, Rick Tomlinson presents four mystical ‘Blue Comet’ reworks by NWW’s Andrew Liles. An engineer and producer of some exceptional calibre, Liles is a fine nomination for this project and adds a genuinely lysergic twist to the original recordings. With his Full Leather Jacket mix of ‘The Burning Mountain’ we’re dragged by the ears over tumultuous psyche rock scraping chisselled with Liles’ endless studio trickery, while ‘Cylinders’ The Test Dream Mix sets the mind on an astral trajectory over swirling raga scales, rippling tablas and uncontrollable stray electronics. Flipside ‘Out Of The Smoke’ emerges from a maelstrom of infernal guitar to a ritualist folk rock sermon preached from a mountaintop, and his Pine Barrens Mix turns ‘Set Fire To The Forest’ into a widescreen vision of scorched earth modular electronics and windswept riffage. Invigorating stuff, we’re sure you’ll agree.

Norman Records
Voice of The Seven Thunders new EP sounds like all the best bits of progressive/classic rock, wedged betwixt some hefty slices of alt rock bread….or summat like that. It has enough quality moments to get any long hair by on a wet night at The Brittania..but who’d want to go there anyway!? It kicks off in proper slaying fashion with a beast of a track called “The Burning Mountain” that sounds like Hawkwind ..if they had just stuck to pot rather than ingesting every drug known to man.Like I mentioned not so long ago, this EP slays the proverbial rock beast. All the tracks have had the remix treatment by Andrew Liles (of Nurse With Wound “fame”) and he has added a layer of swoosh and a certain ambience to the proceedings. I was a bit cautious at first, as I’m not really a fan of Nurse With Wound..I find being in the same room as one of their records is a bit like being trapped in a sauna with Harry Redknapp…uncomfortable and violated…not to mention bored stiff. But this record is like a trip back in time to an episode of the Old Grey Whistle Test, its loud and it sounds ace. The playing on this record is top notch, and the progressive nature of the songs give the tracks a sprawling hypnotic quality that I find beguiling. The tracks sometimes have acoustic “passages” that give you time to fully appreciate the riffs and arrangements. The final track “Set Fire To The Forest” is a prime example of the template of this record. Its two parts heavy rock exploration then it winds it way into a slower groove with multi layered vocals and guitars. All in all this is a heady sprawling record that will ease the craving of many rock twats every where. Norman Records understands that these guys have been sighted in Walsall and are going to undergo a medical…We’ll keep you posted…