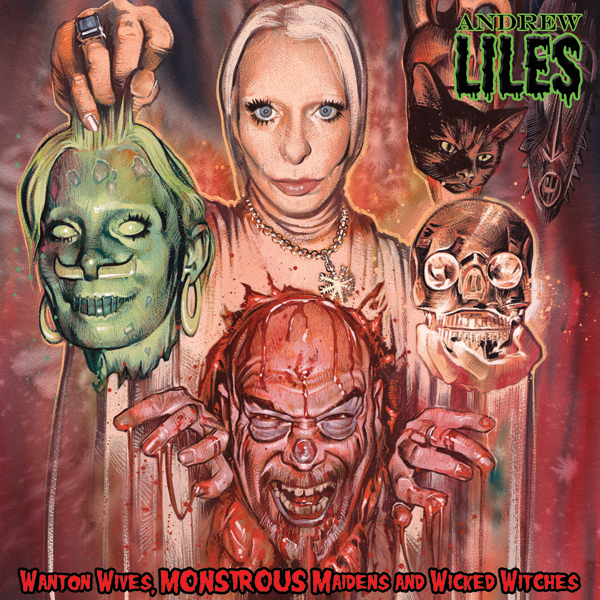 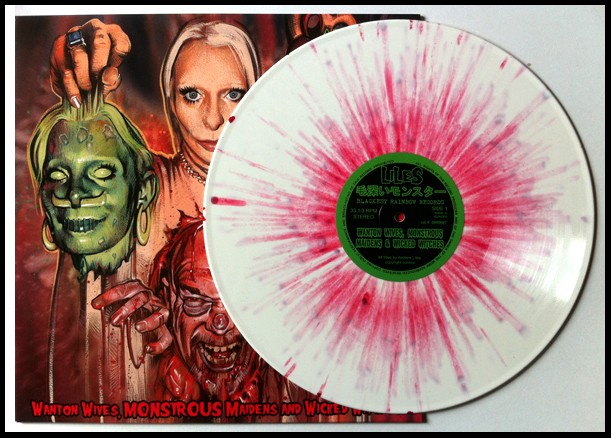 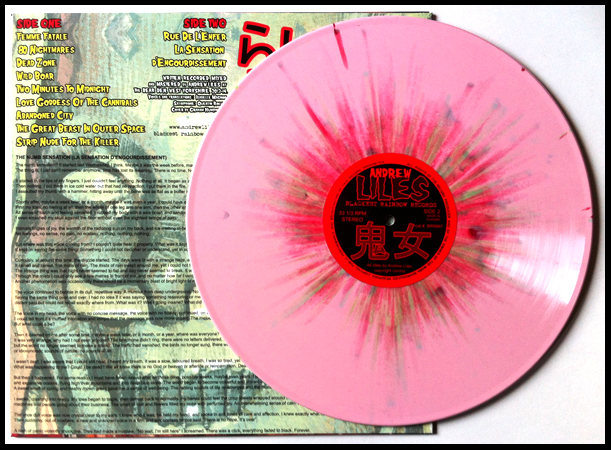 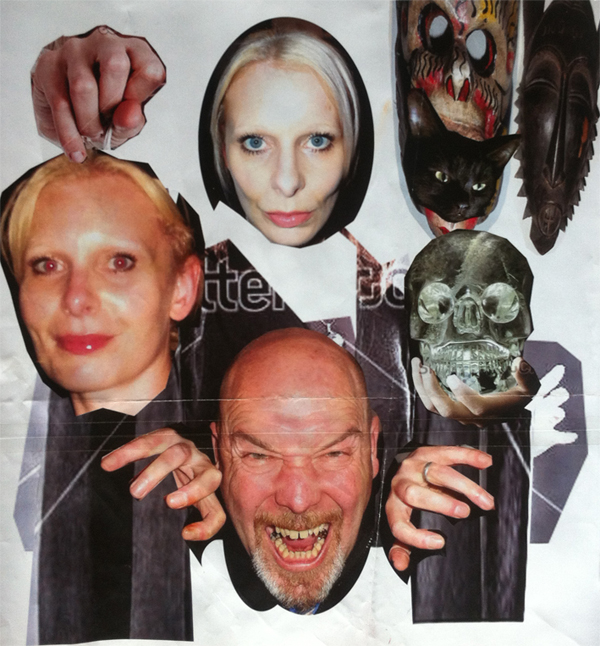 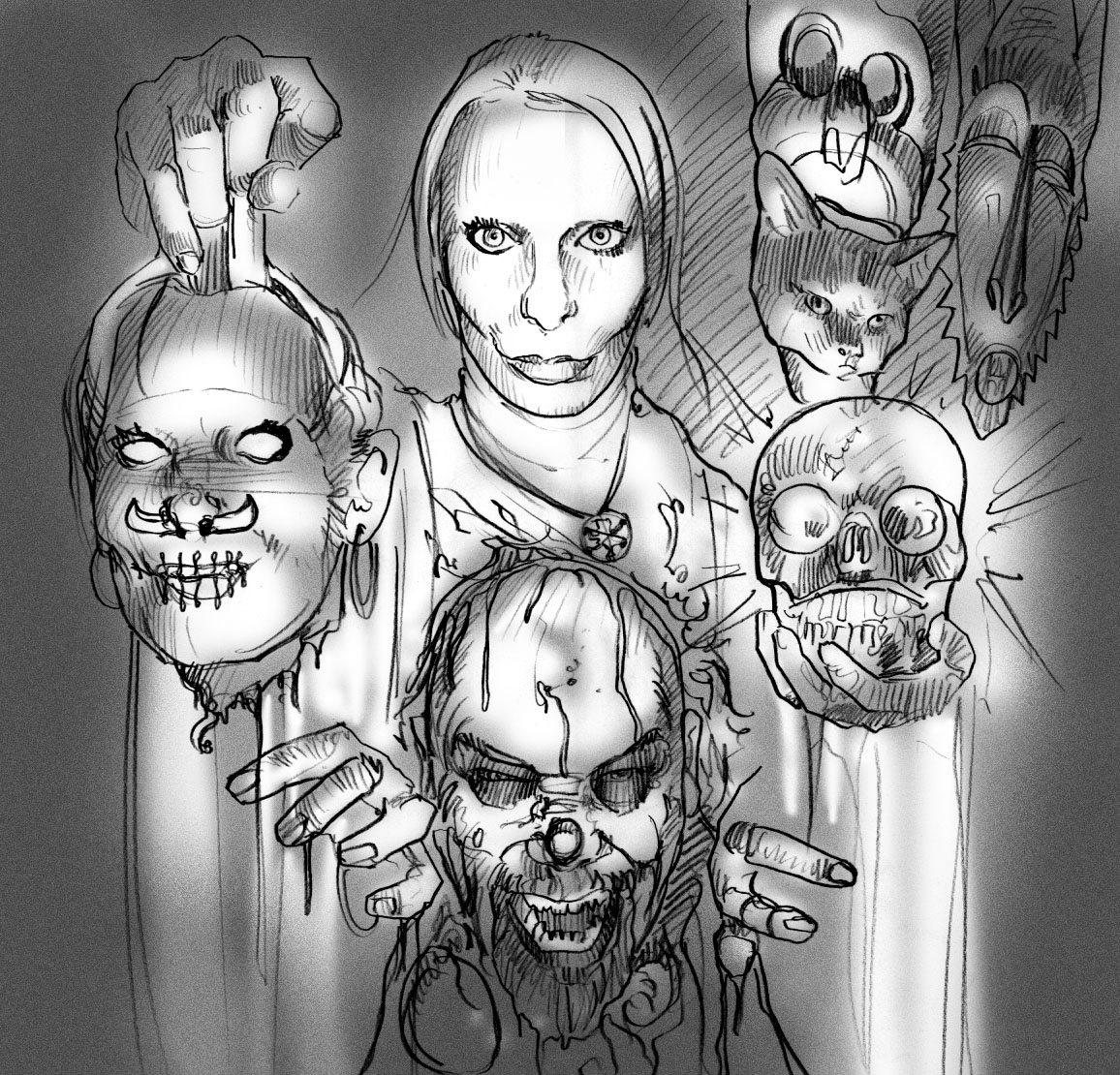 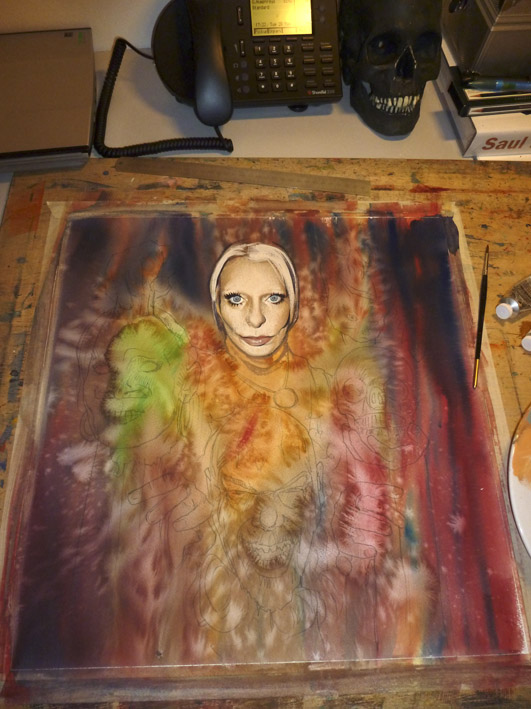 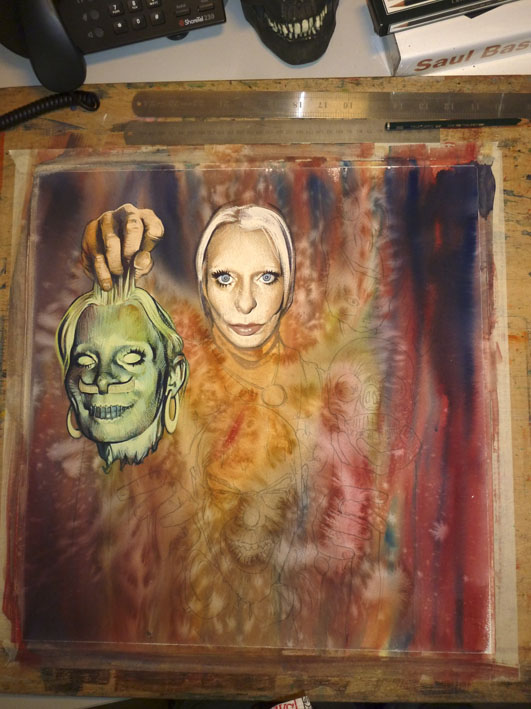 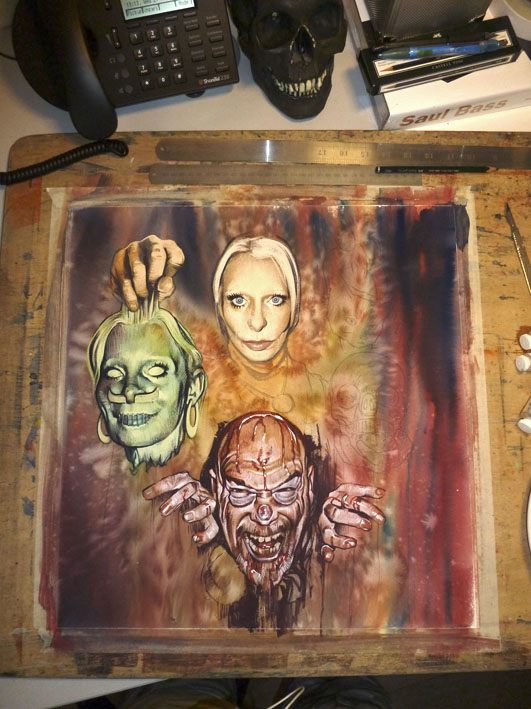 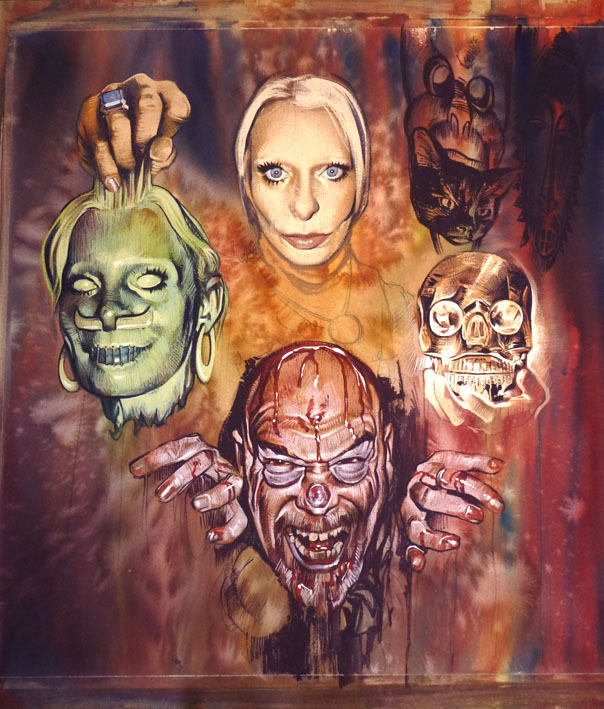 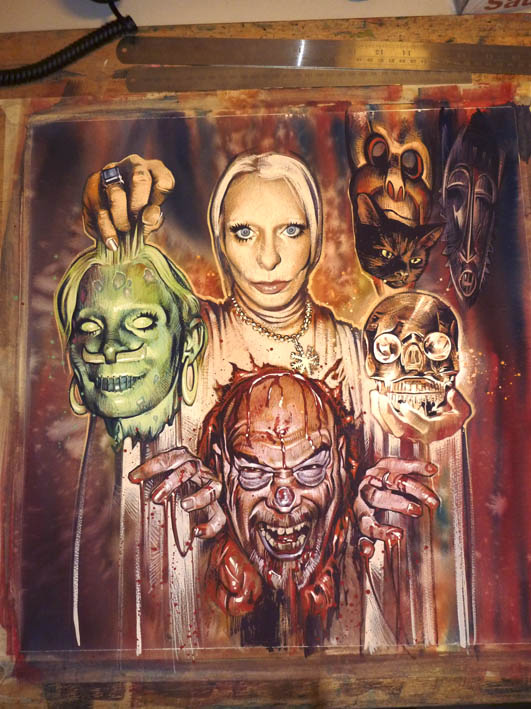 This is the sister album to ‘THE MALEFICENT MONSTER & OTHER MACABRE STORIES’ and another instalment in the ever expanding MONSTER series of releases.

The second side of the L.P. is a horror story written by Liles which was translated and narrated in French by Isabelle Magnon. Saxophone comes from Quentin Rollet.

As with ‘THE MALEFICENT MONSTER & OTHER MACABRE STORIES’ the artwork comes from Graham Humphreys (the revered British designer and illustrator responsible for some of the best film posters of the 1980′s including Evil Dead, Nightmare on Elm Street and album covers for The Cramps and The Lords of the New Church).

The L.P. is released in an edition of 500 in UV gloss finished sleeve, and pressed on 180 gram vinyl. It is available in two colours.

The music on both pressings is exactly the same.

Below is the English translation of ‘La Sensation d’engourdissement’

The numb sensation? It started last Wednesday, I think. Maybe it was the week before, maybe… in fact it was last month, or was it last year? Possibly it was the year before. The thing is, I just can’t remember anymore, time has lost its meaning. There is no time. No tick, no tock.

It started in the tips of my fingers, I just couldn’t feel anything. Nothing at all. It began as a prickling sensation which then turned into a dull and cold feeling. Then nothing. I put them in ice cold water but that had no reaction. I put them in the fire, nothing. I even began to cut them off, nothing. Not even a vague burning feeling, not even so much as a tickle. I assaulted my thumb with a hammer, hitting away until the bone was as flat as a butter knife, but still NOTHING. No sensation whatsoever.

Shortly after, maybe a week later, or a month, maybe it was even a year, it could have even been two years. I just have no idea of time anymore. The rest of my body began to go the same way as my fingers. First my toes, no feeling at all, then the whole of one leg and one arm, then the other arm and the other leg. My lips, my ears, my torso, my mouth, my breasts, and lastly, my vagina. Numb, numb, numb. All sense of touch and feeling vanished. I rubbed my body with a wire brush and sandpaper, I still felt nothing. I pulled teeth from my mouth without any suffering. I even smashed my skull against the floor without even the slightest twinge of pain.

Intimate tingles of joy, the warmth of the radiating sun on my back, and ice melting in-between my fingers would no longer be simple pleasures. No feelings, no sense, no pain, no ecstasy, nothing, nothing, nothing.

But where was that voice coming from? I couldn’t quite hear it properly. What was it saying? It was a muted voice, sounding as if it were underwater, or like someone talking with their mouth full of mashed potatoes. It kept on saying the same thing. Something I could not decipher or understand, yet in some strange way it sounded familiar.

Curiously, at around this time, the drizzle started. The days were lit with a strange haze, almost like dusk or dawn, but not quite. A bright grey, an eternal foggy day of a miserable hue. It rained and rained, fine mists of rain. The mists of rain swept around me, yet I could not feel them. I had no sensations, no sense of touch, no feeling. The haze was thick and went on and on, there was no end to it. The strange thing was that night never seemed to fall and day never seemed to break. It was a perpetual twilight. No beginning, no end. It was claustrophobic and mildly irritating and continued relentlessly. Through the mists I could only see a few metres in front of me, and no matter how far I ventured, I always found myself back where I started. Another phenomenon was occasionally there would be a momentary blast of bright light in my eyes, then instantly the drizzle would swamp everything again.

The voice continued to babble in its dull, repetitive way. A murmur from deep underground. No definition, no clarity. It seemed to emanate from the back of the inside of my head. Saying the same thing over and over. I had no idea if it was saying something reassuring or menacing. Now accompanying the voice I could hear a very faint melody, something I vaguely remembered from my distant past but could not recall exactly where from. What was it? Was I going insane? What did it all mean? Did it mean anything at all?

The voice in my head, the voice with no concise message, the voice with no fidelity, continued, on and on and on. Though now more insistent. More desperate. I could not unravel its meaning or purpose. I could tell from it’s muffled intonation and tempo that the message was now more urgent. The melody also continued to play, circling around and around in my brain, swirling in the far distance. But what could it be?

Then it dawned on me after some time, maybe a week later, or a month, or a year, where was everyone? I hadn’t seen anyone for weeks, possibly months or years. It was very strange, why had I not seen anyone? The telephone didn’t ring, there were no letters delivered, no people in the world at all. Where had they all gone? Not only were there no people, but the world no longer seemed to make a sound. The traffic had vanished, the birds no longer sung, there were no aircraft above my head, none of the clattering of everyday life, or buzz of electronics, or idiosyncratic sounds of nature, no sounds at all.

I wasn’t deaf, I was aware that I could still hear, I heard my breath, it was a slow, laboured breath. I was so tired, yet could not and did not sleep. My deep breaths continued, yet the world outside had faded away. What was happening to me? Could I be dead? We all know there is no God or heaven or afterlife or reincarnation. Death is where everything fades to black forever. In theory I was still conscious.

But then it happened. For some reason I must have fallen asleep after all those days, possibly weeks, maybe even years. I was falling into a dream. A whirling psychedelic vortex, winding through colourful tunnels and expansive oceans, flying high over mountains and into deep blue skies. The world began to become colourful and vibrant once more. Everything was going to be normal again, I could just feel it. A sweet smell of spring and freshly mown grass gave me a sense of well-being. The rattling sounds of life re-emerged and the mists dissipated.

I awoke, crashing into reality. My toes began to tingle, then defrost back to normality, my hands could feel the crisp sheets wrapped around me. I could feel the warmth of fresh linen and hear an abundance of machines and people going about their business. The smell of fruit and flowers filled my nose with perfumed joy. An overwhelming sense of calm and relief filled my heart.

The once dull voice was now crystal clear to my ears. I knew who it was, he held my hand, and spoke in soft tones of care and affection. I knew exactly what had a happened, it all made sense to me now. Then suddenly, out of nowhere, a new and unknown voice in a firm and emotionless timbre said “There is no hope, It’s over”.

A rush of panic violently shook me. They had made a mistake. “No wait, I’m still here” I screamed. There was a click, everything faded to black. Forever.

NORMAN RECORDS
As my record player is being a git (who’d have one eh, bring on the digital revolution!) I have to review this from my bloodcurdled memories of Wednesday evening last and the two clips I can find on the internet spidersweb. This is a remarkable looking record. Pink and green splatter. Almost erotically beautiful. It’s what I term as “one for Dusty”, a phrase I’m sure will make my colleagues chuckle.

Andrew Liles is one of those wonderful old deviant types associated with all our other cherished British deviant types, the people who smell like 1000 year old bookshops and taxidermy fluids, wear round sunglasses and unusual leather millinery, sport alarmingly esoteric occult-y pendants, long grey crombies and re-claimed army surplus. Haha I bet he’s not like that at all. My sides! Hey Ma, I did another cliché.

The music is seriously creaky old horror score avant-gardism of the madly unnerving variety. Fearful shards of synthesized menace, the spooky resonance of a stealthily plucked harp, the distant crash of gongs, the quiet yet terrifying mutterings of an oddly alluring foreign lady, ominous Hitchcockian violin…mad peals of laughter in the distance….creaking door sounds. Oh my word, this is like the best Halloween album ever released just in time for Christmas. Hey Joe! Timing, forget the timing.

There’s certainly something here for the antique synth freaks amongst you all. It’s just a bit scarier and more fucked up than your average bubbling autobahn ride. Liles is known to smear his recordings with what I call “fright-scapery”, meaning he’s an effects wizard and his records are all the more powerful, evocative and sonically effective for all his undeniable talent at conjuring up skin-crawling delight, delirium and terrors. Any time of the day. I’m reviewing this at 10am and the sky has turned the colour of a bruise outside and there are screeching bats pounding at my windows. Thanks Joe. have a nice weekend mate.