May The Fleas Of A Thousand Camels Infest Your Armpits 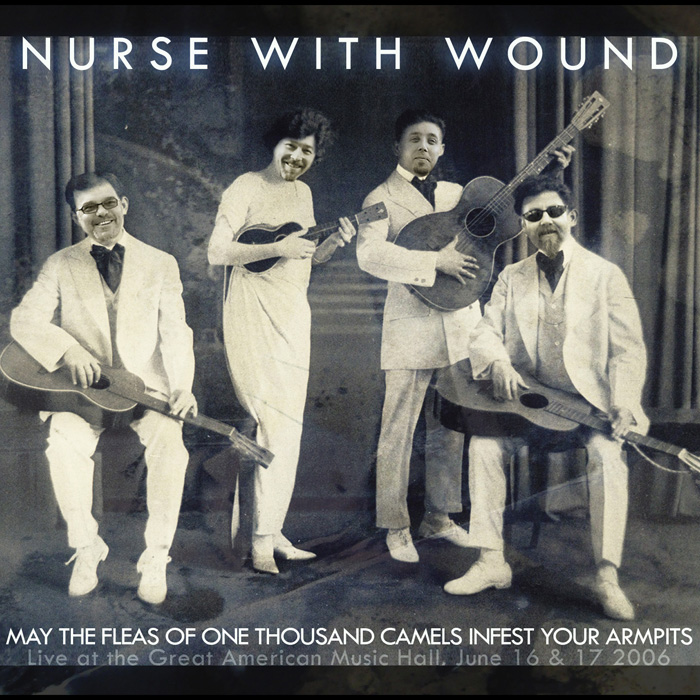 Available only from mailorder and at live shows.

BRAINWASHED
Written by John Kealy
Saturday, 02 May 2009
In 2006, Steven Stapleton and his crew played their first official live concerts in over 20 years (the previous performances were not billed under the Nurse With Wound name). These performances in San Francisco saw the group focus mainly on the musique concrête- and krautrock-inspired elements of Nurse With Wound, eschewing recognisable tracks for live jamming with (what was then) new sounds and samples. The end result is a remarkably good album whose almost incidental ambience is as unsettling as it is compelling.
This album was a surprise for me because I was under the impression that these San Francisco shows were live versions of Salt Marie Celeste along the lines of the Vienna concerts that preceded these concerts (released as Soundpooling three years ago). Although the familiar strains of Salt Marie Celeste does intrude several times during the course of this CD (a blend of both nights at the Great American Music Hall), Nurse With Wound explore very different terrain here compared to the other live performances I have heard (either in person or in bootleg). This is most likely because Nurse With Wound are credited as being a nine-piece band for these shows, a far bigger line-up compared to their other performances. As such, there are times when the music stops sounding like Nurse With Wound at all; electronic drones appear a few times that could be from Coil’s Live One recordings and later on in the performance there is some music that I believe is taken from a track on Irr. App. (Ext.)’s Perekluchenie.
One of the most striking features of May the Fleas of a Thousand Camels… is the use of Diana Rogerson’s vocal tracks that would later end up on her albums The Lights Are On But No-one’s Home and No Birds Do Sing. Here they take on a different character, melting into the abyss and then resolving into a crystalline clarity like a ghostly transmission fading in and out of contact. Unlike the more recent performances by Stapleton and company, there is little in the performance resembling humor (although the photoshopped sleeve art of Andrew Liles spanking Colin Potter is hilarious). As time has gone on, the group have incorporated more of Nurse With Wound’s absurdity into their live performances and it is obvious from this album and Soundpooling that the early performances were less light-hearted. The music here is strongly imbued with those dark hues that colour the more unnerving moments of Stapleton’s work. Due to this eerie atmosphere and the range of novel sounds and textures, this becomes less of a live document and more of a “proper” entry in Stapleton’s back catalogue.
May the Fleas of a Thousand Camels Infest Your Armpits is not only a good Nurse With Wound album but for geeks like me who like to chart when and where changes in artistic direction happen, it is a valuable record in showing how the “not a Nurse With Wound” ensemble that performed in Vienna became the all-singing, all-dancing Nurse With Wound experience that is now very much enjoying the limelight. Like Soundpooling, it is hard to hear that this is a live album as it sounds every bit as polished as any of Stapleton’s studio releases. The bass is booming and the mix is superb, every minute of the performance sounds as crafted as any studio project. Because of this, May the Fleas of a Thousand Camels… should not be discounted as just a live album but a release that sits up there with Stapleton’s best work of this decade.